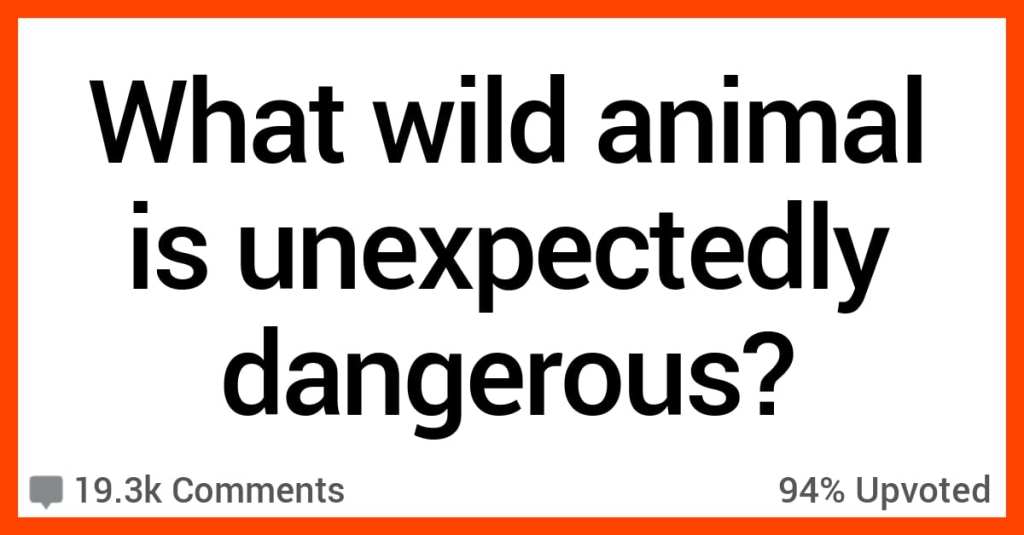 15 People Talked About Wild Animals That Are Unexpectedly Dangerous

Oh, look at that cute little fuzzy koala bear over there! Maybe we should go pet it?!?!

Those are some famous last words if I’ve ever heard ’em.

The point I’m trying to make is that some animals that we don’t necessarily look at as dangerous can really cause us human beings some major problems.

So you gotta be careful…

What wild animals aren’t looked at dangerous but really are?

They can run faster than dogs, can do much more damage, and their response to a fatal injury isn’t “oh s**t i gotta run away”, it’s more like “I’ll drag you to hell with me b**ch”.”

Also be careful not to hit a kangaroo with your car! They always have the last laugh when it comes to fighting 2 ton machines!”

It’s a f**king wolf in a wetsuit, leave it alone.”

4. You better not intrude.

They will viciously defend their territory and gladly bite a chunk outta ya.”

“Did anyone say Zebras?

Zebras have no interest in being domesticated, and will absolutely f**k you up if they feel like it.

“Just learned this today actually but larger species of otter can k**l a full grown human.

Even the smaller ones can mess you up.

Keep that in mind if you see any wild otters.”

Bucks and bulls in rut are dangerous as they will ram into you with sharp antlers if they see you close to a female. Does and cows can trample humans if you are too close to their babes.

They are beautiful animals and there is nothing wrong with observing them. But it’s best to do it from afar.”

They may be cute little things that literally cry on the side of the road when one of their family d**s but I don’t need the plague, thanks.”

They’re often in movies, wearing clothes, being cute, but the reality is they’re incredibly strong and will literally rip a person to shreds.

I think that attack by Travis the chimp in New England awhile ago shed some light on how powerful and dangerous they can be, but that wasn’t an isolated incident.

There are plenty of chimp attacks.”

“Sometimes people will think that herbivore = safe to try to pet.

Don’t approach a moose or a bison, dummy.”

They have a poisonous barb on the back of their foot that will make you want to d**.”

They are territorial, they have giant claws, some people use them to bet on fights. Don’t mess with roosters, they can and will maim you.

I had chickens. That rooster was brutal and k**led an actual bird of prey in a fight and ate it to show dominance.”

Big, mean and the don’t f**k around when protecting their nests.

Even the biggest idiots with wave runners on the lake I live on soon learn to stay away from their nesting sight.”

Eating one can give you a brain infecting parasite that will leave you paralyzed or k**l you.”

It is actually impossible to overstate how scary they are. Somewhere along their evolutionary pathway, their fight-or-flight instinct got permanently stuck on “fight”, and now every single one of them is a Gandhi-level apocalypse engine of the frozen wastes.

A zoo once thought they could put a wolverine on exhibit with a polar bear, figuring that the wolverine was tough enough that the polar bear wouldn’t bother it. They were right, of course; the polar bear left it alone. But that wasn’t enough for this dog-sized packet of aggression.

It decided that it shouldn’t need to share its enclosure… so it k**led the bear. By suffocating it. The wolverine clamped down on its throat and just hung on until it d**d.

These things are the apex predators of the entire planet, and we are lucky they typically confine themselves to the tundra.”

What are some more animals that are unexpectedly dangerous?

Educate us about them in the comments!