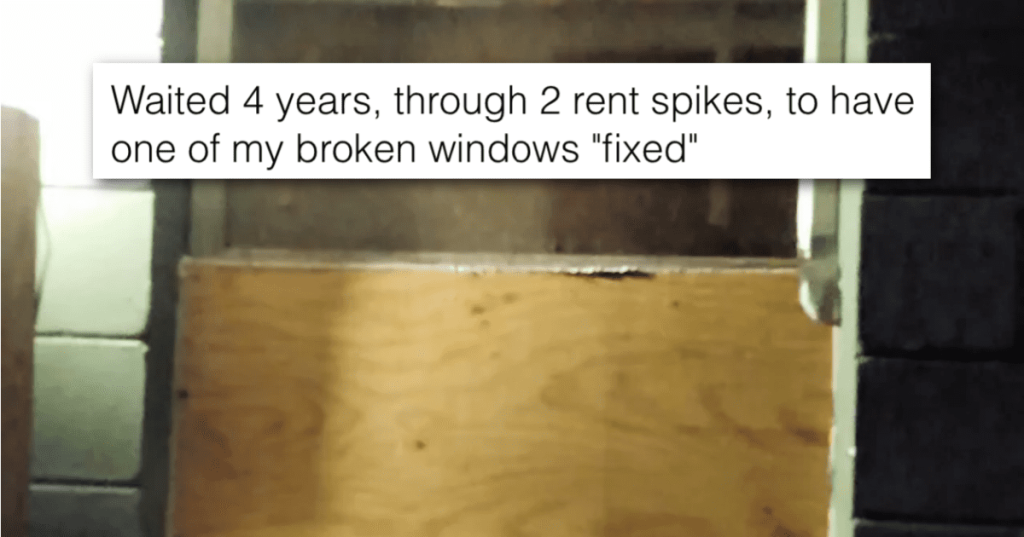 16 Landlords Who Are Woefully Out Of Touch

You hear quite a bit about bad landlords even when rent prices and the economy aren’t crazy, so I suppose it’s not surprising that now, when things are definitely a little out of control, you’re hearing it more and more.

Still, even in a world where landlords are getting greedier and greedier, these 16 stood out – and not in a good way.

But I do not think that’s how you’re supposed to fix a window.

Waited 4 years, through 2 rent spikes, to have one of my broken windows "fixed" from ABoringDystopia

It is definitely cruel and unusual.

just read a client's contract for them and the landlord has written a clause that bans "spices and oils" in all cooking. imagine thinking you had the right to ban flavour from someone's life

At least they tried.

landlord said he was installing shower doors…. from NotMyJob

My parents let me stay out later than that when I was a teenager!

Landlords doing what they do best from ABoringDystopia

12. That is not an appropriate indoor temperature.

I do not care who you are.

Night time temps in my house. Landlord sent a non renewal of lease because we asked him to fix the AC in June. from mildlyinfuriating

11. Public shaming is never the answer.

I suppose sometimes it is effective, though.

Landlord goes the extra mile for rent money from trashy

And don’t even realize how terrible they are.

Horrifying text exchange between a landlord and tenant from trashy

9. Dispirited to inform you…

What on earth does that even mean?

New landlord stopped by to check out my apartment that he already bought, was super nice, shook my hand and left.. then slid by 5 minutes later and put this on my door. from mildlyinfuriating

8. If you aren’t sure whether or not this person is a jerk…

Just wait for it.

Airbnb/landlord on twitter, replies just got worse and worse lol. from LandlordLove

7. Love that journey for them.

Not for anyone else, of course.

Landlords Started a Vlog from LandlordLove

If they want to see it done properly they should come by my house.

final report back, after moving out, this was apparently our fault and will result in loss of some of the deposit because ‘it isnt clean’ from LandlordLove

5. There should be a law against this.

There probably is, not that they would care.

people with "excessive" tattoos and piercings need not apply from LandlordLove

My landlord intentionally cashed my rent check three days before the agreed-upon out of spite because I wouldn’t help pay to remove someone else’s trash. He knew I was barely getting by and intentionally made me poorer. I’ve never met anyone so miserable. from extremelyinfuriating

3. It seems as if it would be thoughtful.

Instead of lowering rent to be more affordable, my apartment management sent out an email for food stamps/banks. from antiwork

2. Those are some dang fancy blinds.

I don’t think they’ll be getting the money back on that investment.

I think anyone who isn’t desperate would.

Just clean up the last tenant’s mess and it’s yours – Wow thanks Ann! /s from LandlordLove

I have no idea what’s wrong with people, y’all.

Have you had a terrible experience with a landlord? If it can rival these, tell us about it in the comments!