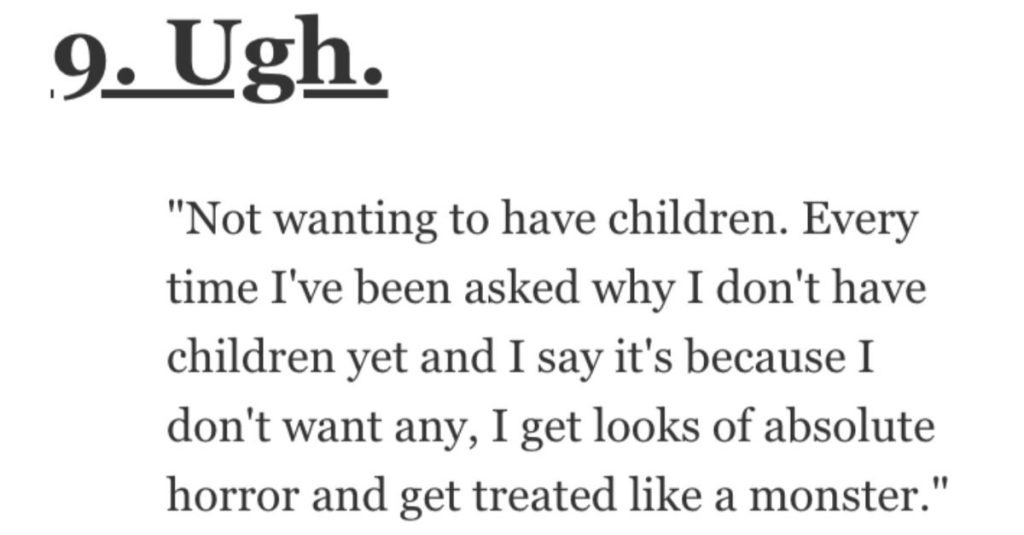 What Should Women Be Able to Do Without Being Judged? People Responded.

One of my philosophies in life is that if it doesn’t hurt anyone, then do whatever you want!

But we all know that people get judged for a lot of their actions…and this goes double for women.

So what should women be able to do without being judged?

“Not wanting to have children.

Every time I’ve been asked why I don’t have children yet and I say it’s because I don’t want any, I get looks of absolute horror and get treated like a monster.

The culture surrounding birthing is so toxic and bizarre. I get told I don’t know what I want yet. I’m 26 f**king years old. I know exactly what I want it doesn’t involve children in any capacity.”

I (American GenX woman who breastfed both children) can’t understand why a society that seems comfortable with women’s breasts barely covered on billboards, at football games, on commercials, at the beach, etc. cringes and clutches its pearls when a breast has a baby attached.”

I just saw one of those street interviews where a guy was asked what he thought of body hair on women. He said he didn’t like it when a woman was waxed smooth, because that was a sign she had been preparing for s** before the date. “She was going to give it up anyway.”

How awful is that?”

“Being tomboys forever without people accusing them of internalized misogyny and transphobia.

We just want to be ourselves, expressing the personality traits we were born with. Breaking stupid gender roles isn’t h**ing someone else.”

“Speak about their experiences without hundreds of men trying to correct them by saying “that’s not true, I’ve never seen it happen.””

“Not be judged or ridiculed by her weight. The amount of cruel comments I see toward women who are robust is diabolical.

I have a sister who is trying to lose weight, and was mocked by being called fat before. Mocking women for their weight does not make you a good human being nor better than her.”

“Being in a non-traditional relationship.

Women can have different feelings/beliefs about non-monogamy.

It’s totally normal to openly criticize women for staying in relationships where their partners have had indiscretions. Faaaar more than other kinds of relationship misbehavior like financial betrayal, emotional detachment, etc.

They’re called doormats and fools- and some are- but many are just weighing out the pros and cons the same as anyone else.

Someone’s self-esteem shouldn’t be attacked over a conscious choice to stay in a relationship over sex shenanigans.

Everyone has their own threshold for forgiveness and healing.

Someone obviously caught in a cycle of a**se may need some nudging to recognize that they’re in a dangerous dynamic, but that’s not always intertwined with non-monogamy.”

Why can dudes have hairy arms and legs but women have to shave or wax to look “presentable”?”

Anything they want to do!”

“REJECT MEN WE AREN’T ATTRACTED TO.

It shouldn’t be dangerous for us to have preferences when it comes to dating or hooking up.”

“Women should allowed to have the right to be upset when they’re looked down on because they’re a woman.”

Women are constantly criticised for talking too much. Studies have shown that men speak more frequently and for longer in public speaking arenas, however it is women who are seen as being too talkative (eg the Tokyo Olympics boss who said that he didn’t like having women in meetings).

I heard two researchers talking on the radio about an experiment that they did where they divided the presentation of their findings exactly 50/50. The female researcher was criticised for having talked too much.

When women are strong in their views they are seen as hysterical or bossy (eg David Cameron telling Angela Eagle MP to ‘calm down dear’). When men do the same they are seen as strong or convincing. Women are more likely to be interrupted than men.

Women should be able to speak as freely as men are.”