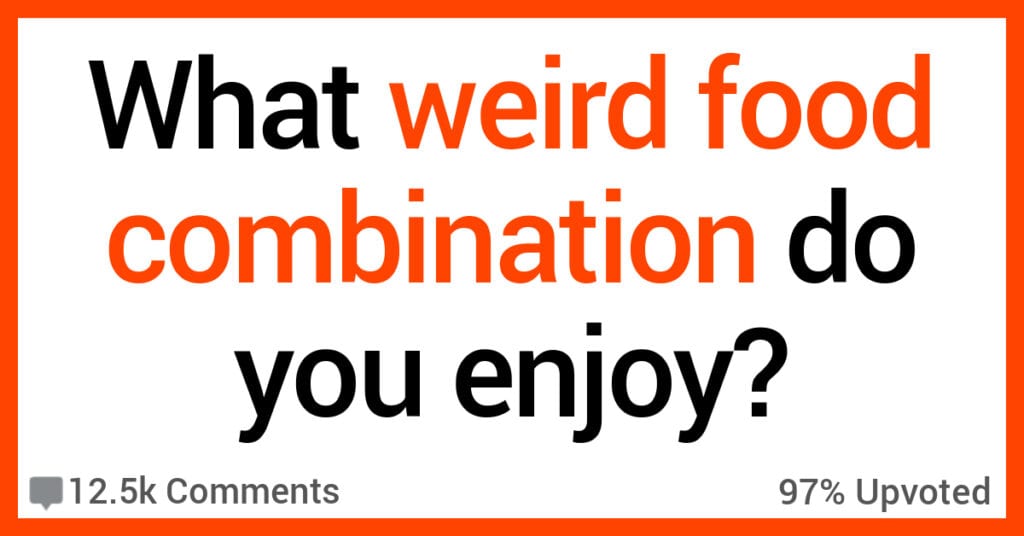 You know what I grew up eating that I still really enjoy but that some folks think is weird?

I know it might sound weird, but trust me, they are delicious!

Do you have any weird food combos that other people think are strange?

These folks on AskReddit sure do! Let’s take a look.

1. All about the textures.

“Mac and cheese, then mixed with apple sauce.

I mean, apples and cheese are a very classic mix, so this just works.

I like to mix at the last minute so the hot and cold texture stays too.”

It’s really no different than dipping pizza into ranch, but people get grossed out when I do it.”

Apparently a lot of people think that is disgusting, but I love it.

I also love putting habanero flakes on steamed vegetables, and horseradish on pierogies and kielbasa.”

“Cinnamon on microwaved grilled cheese was my favorite as a young kid with far too much responsibility over what I ate.

Instant mashed potatoes with American cheese and honey was another big one. (I stopped eating meat at a young age and my mother wouldn’t make separate non meat meals).

In college a friend made me try her nasty looking breakfast and it was fantastic. Egg and cheese on a bagel with cream cheese.”

“Dipping raw pasta (usually spaghetti) into butter and eating it.

Crunchy and smooth at the same time.”

Was dared to mix the two when I was in first grade, and I’ve been doing it ever since.”

“But some people I’ve told about it think applesauce and pretzels sounds gross.

I think it’s a gift from God!”

Picked that up on a vacation to Egypt once and fell in love.

But anyone I recommend it to looks at me with disgust.”

The chocolate goes great in Coca-Cola too.”

“I always get s**t for eating chips (fries) with baked beans and beef gravy.

It’s delicious but people can’t get their head around it.

Also baked beans straight from the can. That’s another I get b**ched at for. They are already cooked and actually taste better cold.

“Salted cantaloupe, bacon, and cheddar cheese in a tortilla wrap.

It is better than it sounds.”

“Cheese Burger with sauerkraut, no bun.

Just beef patty, melted cheese on top, and sauerkraut on top of that. I might be inclined to add some mustard, but otherwise it’s fine as it is.

Most people don’t like sauerkraut to begin with, but using it as a topping for a burger seems to really make people upset.”

“Ketchup on pizza don’t ask but depending on the pizza it tastes like heaven.

Distant screaming can be heard from the direction of New Jersey.”

“I put ketchup on my macaroni and cheese. Or barbecue sauce.

Adds a little tang because macaroni can be a tad boring.

Everyone I know is disgusted by this. I don’t care because it’s f**king fantastic.”

“I don’t normally tell people about my sardine salad sandwiches because sardines are an acquired taste that most don’t want to acquire.

Stir it up until its uniform, then put it between two slices of toast.”

“I love to put applesauce on my pizza.

The few people that I’ve convinced to try it love it, but it’s a huge hurdle to get over.”

Okay, it’s time for you to spill your guts…

Tell us about the weird food combinations that you like.

Do it in the comments, por favor!