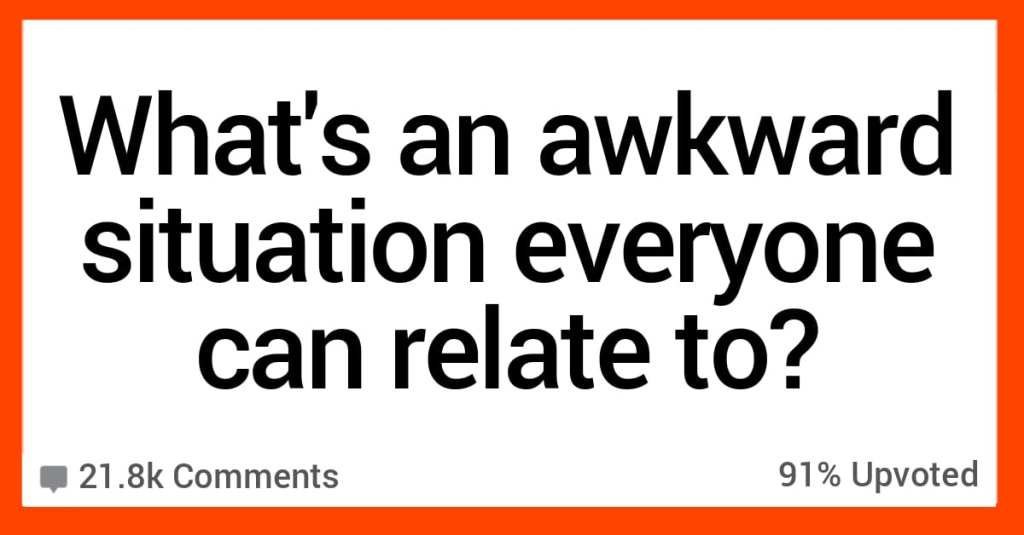 There are certain embarrassing situations that are just universal. You know what I’m talking about.

Getting rejected by a boy or a girl. Getting dumped in public at the Olive Garden during Homecoming…oh wait. maybe that was just me.

“Picking up on everyone being disinterested in what you’re saying and you’re totally bungling the story the longer it goes on as their disinterest rises.

You’re desperately trying to keep the narrative ball in the air and you know it’s all falling apart but your dumbfuck mouth just keeps talking as your dying dignity screams at you to shut the fuck up.”

“When you’ve had multiple interactions with someone but you can’t remember their name but it’s gone too far to admit you’ve forgotten it so you just have to call them love or mate forever.”

“Having your stomach rumble in the middle of a quiet class or meeting.

Both in college, and at store meetings, my go – to cover-up strategy was to furiously flip through pages of notes to try and drown it out.”

“Someone trying to initiate a handshake after you’ve just washed your hands.

It’s either a few awkward seconds of quickly drying your hands on your jeans, or shaking their hand anyway and seeing the discomfort in their eyes.”

“Watching a sex scene with your parents.

Visited my aunt and uncle seven years ago and we were hanging out watching TV. My uncle clicks through channels and stops on Harold and Kumar Escape from Guantanamo Bay. Within minutes it’s the shaved p*ssy party scene.

My aunt and uncle sit there in silence watching not saying anything until the scene is over while I sweat bullets. If you put an acorn between my butt cheeks I could have cracked it.

A few months ago I visit again. Uncle flips through channels. It’s Starship Troopers. Within minutes it’s a sex scene and the boobies are out.

6. Other peoples’ parents are a drag.

“Being at a friends house as a kid and the friend’s mother starts yelling at your friend.

Being at a friends house as a kid and the friend’s father walks in only wearing underwear.”

“When you think someone waves at you so you wave back, but they were waving at someone behind you.”

“The fake smile on your face when you receive a terrible gift.

Wanted the Smash Mouth CD with All Star on it when I was a kid. My aunt wound up getting me the Len CD with Steal My Sunshine on It. Apparently I hadn’t heard the song yet back then even though it was all over the radio. My disappointment was immeasurable and my day was ruined. I faked a half smile.

Decades later I love Steal My Sunshine and I should have been happy.”

“When you are videochatting, start talking and because of the delay you interrupt each other all the time.

“When you’re saying goodbye to someone, and then you both end up walking in the same direction.

Or when you turn and walk into a wall with people watching.”

“That walk down a long hallway toward each other where you’ve clearly seen the other person, but they’re too far away to say something, so you do the awkward look around until you get close enough to say “hey” and keep walking.”

“When you go for a hug but the other person goes for a handshake, so you start with a handshake but do a weird hug at the same time with your hands in each other’s crotches.”

“Stalking someone on social media and accidentally liking a comment from months/years ago.”

“When you’re walking on a sidewalk with 2 other friends and you’re the person that does not fit so you have to stay behind them.”

16. Humiliation at its finest.

“When the server brings your food and says “enjoy your food” and starts walking away and you say back, “you too”.”

Yikes…a lot of these look pretty familiar, don’t they…?

In the comments, tell us some more awkward situations that we can all relate too.