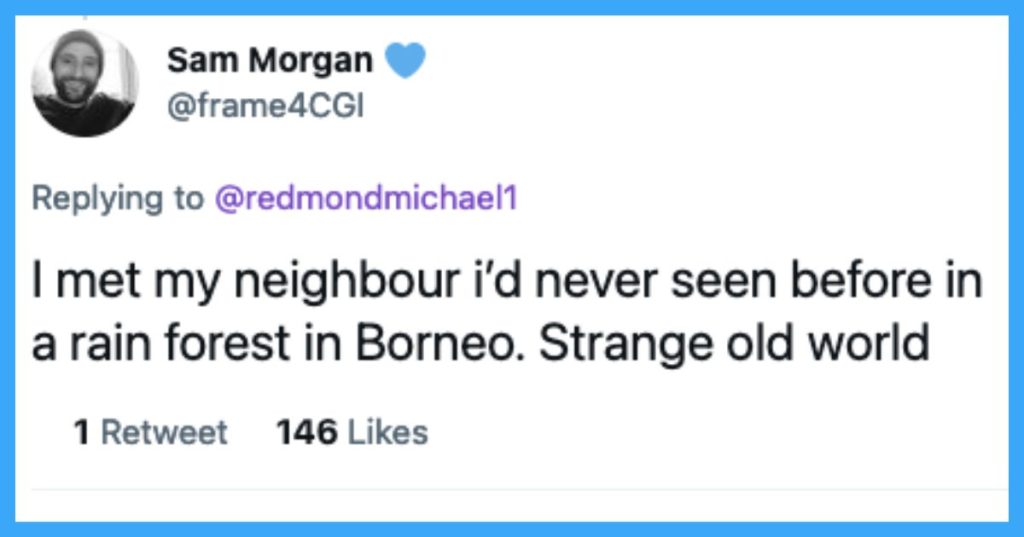 The summer before 12th grade, my family took to a trip to the UK.

We were standing in the lobby of a theater, waiting to see Agatha Christie’s Mousetrap, when someone called my name.

It was a girl I’d gone to school with before my family had moved to a different city six years earlier.

What a crazy coincidence, right?

Taxi Driver : Is that a Dublin accent?
Me: Yes it is.
Taxi Driver :Oh, do know a guy named Sean Corcoran?

Such a stupid question when you consider there are over one million people in Dublin…. the annoying thing was I fucking do know Sean Corcoran.

Apparently, this sort of thing is more common than anyone might think!

This happened to me on a trip to the Serengeti. A drunk American bro found out I’m from Canada and asked if I know his buddy Mike Pedri. I told him Canada is HUGE. And also yes I went to high school with Mike Pedri ?

Met an English guy in a bar in the Bahamas. Asked where i was from, told him, asked if I drank in “The Horse” said I was there last Saturday, asked me if Eggy was still playing pool there, told him I played a frame with him on Saturday…. bizarre…

I was in Washington and the poor bar man who worked in the bar across from union station started to ask me if I knew someone in Ireland … I went on a huge rant about not knowing everyone in Ireland … and then let him ask me anyway … he knew my brother!!!!

There seemed to be quite a lot of stories from the Welsh, which I find intriguing.

I live in rural Wales. I’m from Australia. A few months ago our grocery delivery driver hears my accent and says, “you must know Tamina!”

Of course they don’t always end that way:

Cashier: Are you English?
My dad: Welsh.
Cashier: Wow! … uh… Do you know Kevin Jones?
Dad, without missing a beat: Is that Mrs Jones’ boy?
Cashier: YES!!!
Dad: Nope, sorry.

And then there were stories where people encountered someone from home unexpectedly.

Like this one, where hitchhiking turns out to be the fastest way home…

I’m assuming they mean the Wigan near Manchester, and this really just blows my mind, like the fact that a truck would even be driving from Turkey to Manchester.

Mate of mine at Uni spent the summer in a remote part of Turkey. He started to hitchhike home on a dirt road near to the village he’d stayed in hoping to get a lift to the nearest town. The lorry that stopped was going to a factory 50 yards from where he lived in Wigan.

Or this one, which is so much like my story!

My dad lived in the UK, was on holiday in South Africa. One of the days of the trip visited Table Mountain. Got to the top and heard a guy say his name. Turned around to see his neighbours from two doors down ??‍♂️

This feels like the start of a rom com.

I met my neighbour i’d never seen before in a rain forest in Borneo. Strange old world

If anyone out there ever doubts coincidence, they just need to take one look at this crazy thread.

1st evening in an oil camp in Angola i sat down to diner at a table of 8. The guy opposite with a Dublin accent asks where i’m from?
Derry.
What part?
Waterside.
‘What part?’was asked 3 more times & i was at the name of my street
What number?
4.
Knew your father Eddie well.

I mean, some of these seem downright impossible.

Friend at party in London the night before trip to US.
“If you see my sister, Sian, say hello” was request from a fellow party goer.
5 days later at base of Statue of Liberty she hears a woman speaking Welsh. “You wouldn’t happen to be Sian, would you?”
Yup, she was

And some of them, quite honestly, were so intriguing that they needed more than 280 characters, in my opinion, because I wanted the whole story.

PA announcement at Knebworth festival ‘would Rosie please come to the first aid tent where Ian thinks he is a frog’. Years later telling the story to a girl in a bar she said ‘I am Rosie and that is Ian bringing the drinks’.

Then there were the rather curious family dynamics.

Brother was a supervisor at Covent Garden tube, two kids rock up asking directions. Brother asks where in Kerry is the accent from, they say Listowel. Brother asks do they know my Uncle Tom, sure do they said, we’re his kids so you must be our cousin! How small is this world.

I love the near miss stories too.

My cousin got into a Dublin taxi about 11 years ago and saw a copy of Metro on the seat.
Cousin: My cousin works for that paper.
Taximan: Is she blond and American and her father is from Cavan?
Cousin, flabbergasted: Yes…?
Taximan: She just got out of the car

You know how you hear stories about identical twins raised apart showing up to meet each other wearing the same outfit by accident?

This one reminds me of that.

Me (from the states): looking at a land map.
Woman who looks like me: looking at same map.
Me: What name are you looking for?
Woman: Gildea.
Me: That’s my family, too.

Reader, turns out we were second cousins.

Perhaps best of all was this exchange buried in the thread of responses:

Went to visit family in Enfield years ago with my late dad. He’s telling me how he got barred from the pub we are walking into some thirty years before. As we walk in the door woman behind bar shouts out “YOU’RE STILL BARRED BANGSY!” She’d been a barmaid there and now ran the pub

Pete didn’t quite remember, so the user told him her maiden name.

Yes, that was me. How apt that I saw you on this post ?

What a small world it truly is. Do you have a story like this? Share it with us in the comments!