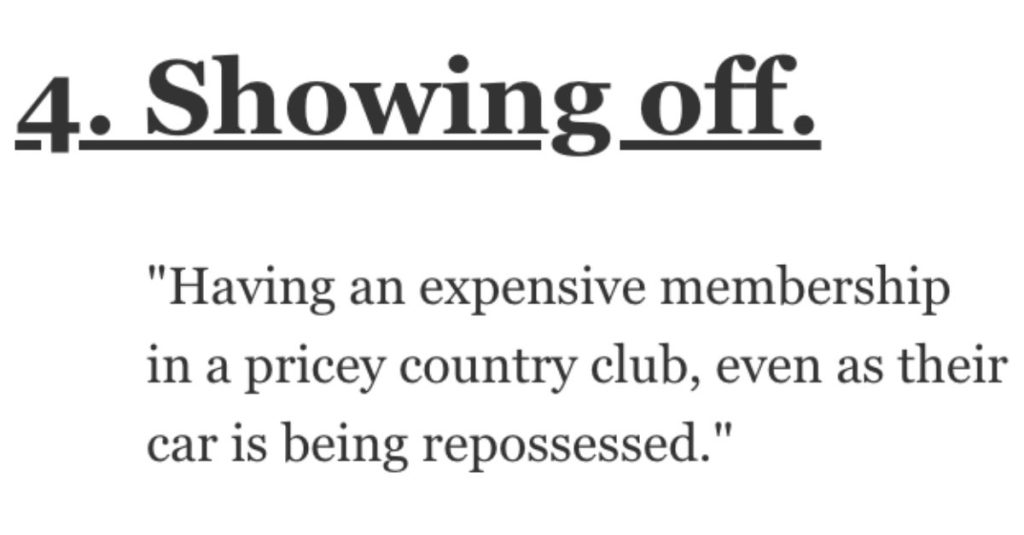 I’ve never had a ton of money before, so I don’t know how I’d necessarily deal with that…

I guess you just never know until you’re in that position how you’d spend your wads of cash.

People on AskReddit talk about how they can tell folks don’t know how to manage their money.

I once met an entire family who insisted on wearing only white. I taught English to their son at a private school in China. They put really expensive imported brands, all white, on their 6 year old so he could go play on the floor and spill food on it.

Honestly I don’t know how some people survive, let alone get rich, being that dumb.”

“Blowing paycheck after paycheck on designer brand clothes with a perpetually empty pantry and refrigerator.”

The landlords in my building are actually like this. It’s a husband and wife (maybe 40ish) and one adult daughter and one teen child. The women have day jobs and the husband does maintenance here. I assume they’re live rent free, and maybe get paid something on top of that.

They have 3 brand new fancy cars. And they get replaced about once a year or so. I presume they’re leasing and getting new ones every time each lease is up. Right now there’s a Charger, Raptor, and some kind of Lexus. There have been at least a dozen prior cars in the few years they’ve been here.

They’re nice people and manage the building well. But man they must be blowing so much money on all these cars.”

“Having an expensive membership in a pricey country club, even as their car is being repossessed.”

“I think a classic example is a beautiful home in a nice neighborhood, but it’s not kept up and looks tacky compared to everyone else’s.

They bought the fancy house, but they can’t manage their money well enough to take care of it.”

Please save time and money by making coffee at home.

While in the line at Starbucks you could have already had good coffee.”

“In Australia (and super common in the suburb I live in) when you drive a range rover but your kid catches a bus to the local public high school.

Or when your kid has to claim free breakfast every morning but you’ve got the tell tale cling wrap around your new leg tattoo.”

“The car is usually a dead giveaway.

There’s very little justification for having a brand new, upper midrange car. They’re super expensive, and lose a ton of value, literally the moment you get behind the wheel.

9. What are your priorities?

“When someone always has their hair and nails done plus money for new clothes, but is always complaining that they’re too broke for groceries.”

“Unopened boxes all over the house. Crazy stuff in odd places.

An example. I knew this rich guy and I walked in his front room and there was a huge portable sauna just sitting there, not functional.

He bought it at an auction 6 months before cause he wanted to impress his fellow churchgoers.”

“Bought a $2,500 Rottweiler puppy. No money for vaccines, des**ing or registration.

Now she’s got parvo, and you’re screaming down the phone at the local animal control who picked her up wandering and sick, impounded her, and want you to pay the impounding fee and get her medical care before they’ll release her back to you.

They’ve even offered to waive the impounding fee if your vet confirms they’ve seen and treated her, but no, don’t they understand you don’t have money for that kind of thing, and you’re going to go to the media about how they’re extorting you, and sue them for the cost of the puppy?”

I’m self employed. At that point in time I was barely making enough to cover my bills. About $3.50/hr. Working 11 hour shifts. I had saved every penny for seven years to get the home I was living in. Bought my own car and was paying my loan every month. I took care of all my expenses.

She worked at a high end company. Made $22/hr and her job had an on-site gym, Doctor’s office, great benefits and free health insurance. She was living with her parents for free, had zero bills to pay. Yet she was always broke. And it was somehow my fault, for having it “so much easier.”

Yet I saw her many times on payday, she’d go out and spend $200 on books, $300 on merch from her favorite show, throw money away on fast food every day and gas to drive her and her friends around all day.

Years later now she’s still always broke, now in debt, living off her family and boyfriend and his family.”

“They spend minor “windfalls” immediately. Especially on electronics or trinkets or gadgets.

I see this on the buildapc subreddit and elsewhere. As soon as people get money, they spend money.

There is a significant portion of the population who haven’t learned or refuse to learn how to handle money correctly.”

“Buying an expensive car then never changing the oil.

I worked with a guy who broke down on the highway one day. Turns out he hadn’t changed his oil, or probably any other form of maintenance, for like 8-9 months.

Knowing his commute, he should have gone 3 months at most between changes just on work mileage.”

“Speaking about how they can afford something because of the “monthly payments”.

Obviously there are some things where it makes sense to finance, but if it’s every purchase you make, chances are you are terrible with money.”

“Their quality of living going drastically up and down proportionally depending on how close it is to payday.

When they have cash, it’s expensive lunches, lots of online shopping, and making plans. Followed by a week of sulking while eating ramen tortillas.”

When a person pays with a card, gets declined, switches to another one, and gets declined again they’re definitely bad with money.”

“I saw a show on Netflix where a woman had a house where 99% of the items (including the wall moldings) had the Versace logo.

All of her baby’s clothes too. It just looks so bad.

It’s okay if you’re not very good at interior design, but she could just hire a designer…

“All the people who booked 3 week 5-star package holidays to Spain when we knew we were heading into a pandemic lock-down, and then went to the tabloid papers to complain they couldn’t afford to feed their kids because the holiday company had gone bust and there was no refund.

If you couldn’t afford to feed your kids without the refund, how were you planning on feeding them if you had gone on holiday?”

“People with six figure incomes who never have money.

My brother is one. He says when he gets his paycheck he HAS to spend it, it doesn’t even matter what he buys.

He does seem happy though, and he doesn’t have any debt so he’s probably on to something.”

“Buying 2 or 3 tablets at a time, so you can use one and keep the others on charge so you’re “never without one”.

I had to help her troubleshoot 4 of them.”

I will frequently speak with people who make 6 figures (the average household income in my city is about $42k) and want to use a zero down or first time home buyers’ down payment assistant program, because they do not have a savings.

Savings can mean investments, 401K, emergency fund…the people I am referring to make $15k a month or more and spend all of it and have no savings or investments to fall back on.”

“I did work for a guy at his beach house. Second home, house on lake Michigan, drove 100k suv.

The lot alone was probably worth a million. He had been a customer for a while and we always worked on his stuff. One time he’s not there, but wants me to fix something because he has a party coming up. I figure, no big deal. Order parts. My boss flips his s**t. He gives a big speech about not trusting people because you don’t know who is who.

He’s like, I’ve met people in the ghetto who have a million dollars stuffed in their mattress, and people in million dollar homes who can’t afford two sticks to rub together to stay warm. You only see what people allow you to see. He says, always collect at least half up front. That way we can at least cover parts and our initial trip if nothing else. That job goes fine and I don’t think much about it. I actually think he’s making a fuss about nothing.

The guy has been a customer for some time. A few months later this same guy calls and asks me to go fix some other thing, and to call him and he’ll pay over the phone if necessary, but he’ll be in later that day. I get to the beach house, and I s**t you not every door on that house is bolted and padlocked. On all the doors, duck taped, are letters from the state saying the property is being seized for unpaid property taxes to the tune of some 600k.

My jaw dropped and I just walked away. I didn’t even call the customer back because he was coming in town later that FRiday. Things started to click. Whenever that guy was there, he was always screaming at someone on the phone. Not yelling, screaming. You start going over every encounter, piecing things together you didn’t think much about.

I thought he was just a shrewd businessmen. Turns out he was under a ton of financial pressure, and trying to project success to people. You learn as you go I guess.”