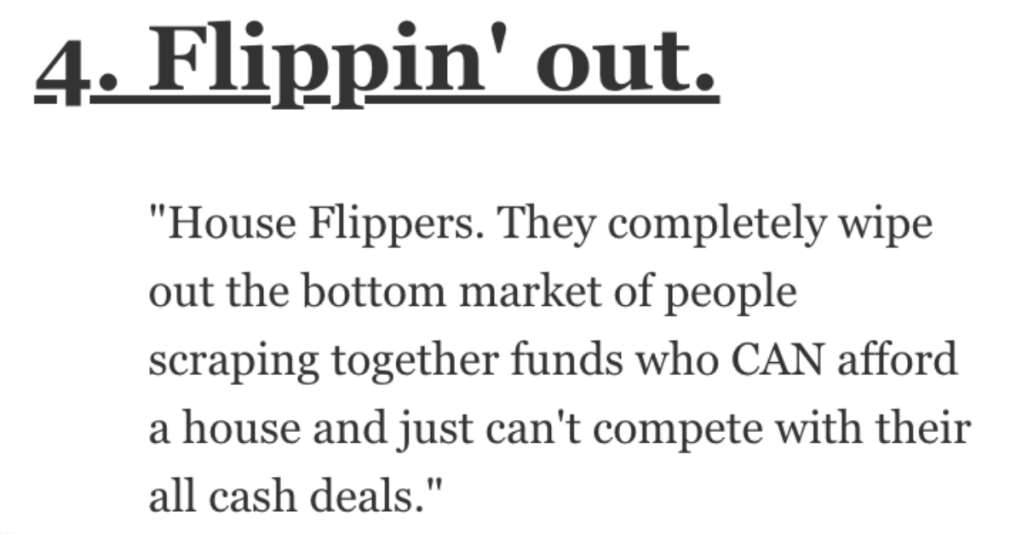 If certain industries were to go away for good, which ones would you definitely NOT miss?

Something to think about, right?

Now, truthfully, it’s been a while since I read the old good book. But I’m fairly certain this was the very thing Jesus was preaching against.

In short, f**k Joel Osteen and his fancy cars.”

“The health insurance industry as it currently exists in the US.

It’s nothing but a barbaric, extortionist system that exists to deny people care, f**ks with people endlessly before and during access to care, and squeezing people as hard as possible financially.

It’s indefensible and it k**ls thousands of people every year.”

The government knows how much I owe so this entire industry is unnecessary and could very easily not exist if they just told me how much I have to pay.”

They completely wipe out the bottom market of people scraping together funds who CAN afford a house and just can’t compete with their all cash deals.

And to the “bUt NoBoDY wOuLd BuY ThOSE HoMeS”…there are special rehab loans specifically intended for fixer uppers. Also many ppl are handy and some of the houses just need cosmetic refreshing and are perfectly habitable.

It takes away the bottom portion of affordable homes and places them back on the market at premium top prices so rather than a range of pricing spread out across income ranges during a housing shortage, EVERYONE is competing for the same price range.”

Seriously, I don’t know why no one is realizing how much the quality of clothing has plummeted since the 1980s.”

I remember
those happy days when the Do Not Call list worked.

Now I get half a dozen spam calls a day.”

It’s straight up extortion. It also keeps creating more things to pay for, like half the stuff my friends and cousins are doing our parents have never heard of.”

My wife has wasted too much money on the s**t.”

They have artificially inflated the price of tickets to a ridiculous extent and effectively priced out countless fans.”

A business that breeds puppies for sale, typically on an intensive basis and in conditions regarded as inhumane.”

We had so many of these places around here (low income area, total shock and surprise that they would set up shop here!) and I’ve noticed over the years most of them have closed and are other things now.

It makes me so happy to see.”

I have a relative that has owned 4 weeks at one for over 20 years. Last time I heard, he’s paying over $5000/year total in “maintenance fees” whether he uses it or not.

He’s used it a handful of times.”

If you’re in politics, and hold some significant position, you should make enough money to live a decent life, maybe $100k a year in current dollars if we’re being generous, but literally nothing more.

No f**king donations, no f**king side hustles, if you want to be a politician? Better be for a genuine f**king reason.”

I don’t want a funeral and my family paying thousands for a service. Our state has allowed body composting and I want to be returned to the earth.

My family paid thousands for a funeral for my uncle and it was awful. Wasted money on a preacher even though he was an Atheist.”

There should be no incentive to keep someone in prison. If we, as a society, want to send someone to prison, it should be a strict negative all around, no one at the top should benefit. Sending someone to prison should be something that EVERYONE wants to avoid and we should try to keep people from re-offending as much as possible.

Think to yourself: Is doing hard drugs really worth spending $2k-5k/month to keep someone in prison? Well, if the for-profit owners are making tons of cash/month per bed, then… Yeah, keep them coming.”

The fur industry has been d**ng for a long time already. I’ve never bought furs, never cared for furs, I’m under the impression that rich snobs wear them as a status symbol and animals are being endangered for our vanity. Now, I’m not talking about people living in small villages in harsh climates.

I get that for some people furs can be vital for their survival, I’m talking about furs being used as status symbols in the fashion industry.”

I get that it will still exist on the black market, I’m just sick of seeing it in seemingly every billboard, and youtube and podcast ad.

I don’t care about sports or gambling!”

My city is full of s**kers. Every open public space reeks of s**ke. Can’t enjoy a place without second hand s**king.

It would be great to be able to breathe clean air in parks. Number of addiction sufferers will reduce. Fewer patients with respiratory diseases.

The load on healthcare industry will decrease significantly; more people might get access to hospitals. Humans, in general, will live healthier lives.”

“Factory farming and the commodification, torture and slaughter of sentient beings because people think they taste good or make a nice jacket.”

Coal is by far the dirtiest fossil fuel. It is dirtiest both in terms of carbon emissions per unit of energy produced, and in terms of other pollutants (particulate matter, Sulfur compounds, Mercury, etc) that are released during combustion.

Humanity’s collective future depends on our ability to mitigate climate change. The single biggest change that we can make towards achieving that goal is to stop getting power from coal.

I’m sorry to the regions that depend on coal mining economically, but coal is an absolutely disgusting fuel source, and for the good of human civilization as a whole we need to stop mining coal.”

“No Becky, I do not want a sparkle leopard cardigan or tee that says ‘rosé all day’ when I could just shop on Amazon if I don’t want to go out in public & spend half the money. Pretend ‘boutiques’ are a joke. Please get a real job.””

“Whoever the hell keeps sending me anything in the mail.

Such a waste of paper.”

It’s just a way to transfer wealth from the desperate and poor to the most predatory of the wealthy elite.”

“Travel agents. I’m going on a trip with my family and they used an agent.

It’s an unnecessary middle ground that does nothing but add extra steps and make the whole process more difficult as well as human error when using a middle man is just more.

I don’t get the point of travel agents.”