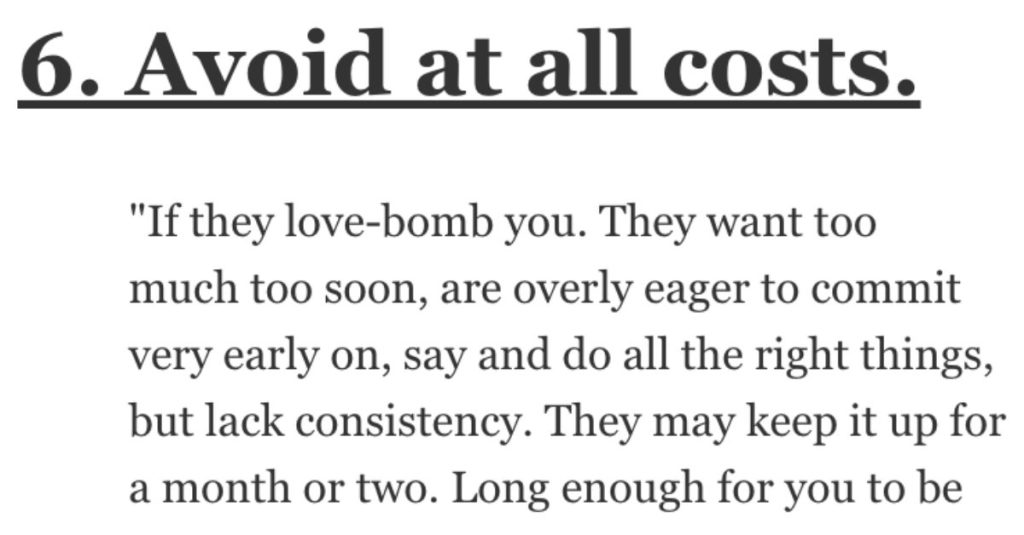 Certain people get manipulated in plain sight and they don’t even see it…and that’s why you have to keep your eyes open to know what’s going on around you!

Do you know what I’m saying?

What are some clear signs that you’re being manipulated?

“If someone tries to tell you that you can’t leave them because you’re all they have.

“When your behavior around that person is entirely narrowed down to “things that won’t upset that person,” because they have trained you with the constant threat of their bad emotions.”

Our bodies often know before we do.

I threw up every time I went on a date with my ex and didn’t listen to it at all.

6 months later I was severely depressed and borderline suicidal. Gotta listen to your gut.”

“Everyone’s priorities are evident in their actions, full stop.

When their words do not match their actions it’s clear you’re being manipulated.”

“They constantly make you prove yourself.

They are always “just joking”.

They play the victim card.

They kill you with kindness.

They make your problems feel small.

They emphasize their calm, cool and collective side.

They use emotional blackmail.

They take advantage of your trusting and sensitive nature.”

“If they love-bomb you.

They want too much too soon, are overly eager to commit very early on, say and do all the right things, but lack consistency.

They may keep it up for a month or two. Long enough for you to be hooked. Then they start treating you poorly.”

“At some point you stopped doubting them and started doubting yourself.

“For me, it was being accused of being overly sensitive.

Turns out it’s completely reasonable to be offended by offensive things.”

“If you defend yourself against the manipulator, but then they play innocent and make you feel guilty, and making themselves feel like the victim.

If they keep you from you friends/make you drop connections with others.

Choosing certain things for you (i.e. food, clothing), just what they want, and stuff you might not like.

Making you stay home instead of going out.”

“Aggressiveness/anger/conversation steering at the very beginning of a discussion that they don’t want to have.

The conversation will never occur, there is always something that stops or diverts it, endlessly.”

You constant being given the feeling you are doing something wrong. Behaviour towards others painfully different than behaviour towards you. Keeping you from family and friends.

Calling you wherever you are for control. Change treatment of you without giving reason.”

“Being accused of behavior that was originally exhibited by the accusing party.

Simple version is say a friend of yours is being extremely hostile, you respond in a frustrated manner wherein out of context you wouldn’t be viewed in a good light.

They then go about telling mutual acquaintances that you are hostile.”

They will start small by getting you to do little favors for them then they get angry if you don’t do everything they ask.

And a lot of manipulative people will start fights and argue for no reason. Just endless fights about who is right.”

“Manipulators often induce uncomfortable, “negative” feelings such as fear, guilt, or shame to get you to do what they want.

Pay attention to the feelings you get around other people.”

“Thinking to yourself: “No he/she wouldn’t be doing this on purpose to me” one too many times.”

“You are being forced to make decisions that you are uncomfortable with.

You feel like someone is always pushing you to make rushed decisions.

You never get the last word.

Someone behaving differently in public vs in private.”

“You’re being manipulated when the essential message is:

“Be reasonable and do things my way.””

“A big red flag is that you feel utterly miserable after spending time with them.

A much, much bigger red flag is that you desperately want to spend time with them again.

Toxic relationships are FIERCELY addictive, more than any substance I have ever tried.

If a person makes you absolutely miserable, AND you feel like you can’t live without them, you’re in serious trouble – only some very good friends, and if possible a therapist, can get you out of that.”

“The feeling of walking on eggshells.

The sick feeling in your stomach when you think they’re mad at you about something.

You no longer have friends.

You have issues with family.

nothing about your life is of your choosing.

You filter everything you say to avoid fights.

Always putting their feelings before yours. …I could keep going but I’m sure you get the picture.”

The term “gaslighting” is often used to identify manipulation that gets people to question themselves, their reality, memory or thoughts.

A manipulative person might twist what you say and make it about them, hijack the conversation or make you feel like you’ve done something wrong when you’re not quite sure you have.”

“If someone is discouraging you from talking to or hanging out with your friends and family.”

“If they do something that hurt you and you end up apologizing instead.

Or, if you tell a person that you’re uncomfortable with, say, certain types of jokes, but they keep telling you that you’re just too sensitive.

Basically if they make you feel bad for their actions.”

“Everything is always your fault.

When you catch them in a lie and you KNOW they lied, but they still don’t admit it.”

“They tell you you can do something, but then either get mad if you do it or text you like 1 hr in mad that you are going to be some specific time longer than they expected.

Tthey don’t communicate something they want you or don’t want you to do, but then they get mad at you for not reading their minds.

Tthey get mad at you for asking a question they think you already know or should already know.

They withhold s*x for only when “they feel emotionally connected to you” which turns out to be never.

They don’t forgive you for even small things, but expect you to have to “climb the ladder” back into their grace.

They give more criticism, snarks, huffs, puffs, etc than they do love.

They get mad and stay mad (silent treatment) for extended periods of time (days) on the regular.

They rarely apologize, but say “you have never apalogized ”.

They don’t come to your grandfather’s viewing and then barely acknowledge you exist at the funeral.

They blame you for them not being willing to communicate because they fear how you respond because you try to share your story/point of view in disagreements.

The leave in the middle of any disagreement that you don’t just 100% agree with their point of view.

They use “boundaries” as an excuse to control you.

They managed to get rid of get you to get rid of your bed, your dresser, your kitchen table, your couch, your spare bed, your recliner, your end tables, your bedding when she moves in with you.

You have close friends she has never met because coincidently anytime you see them she is unable to go with.

She makes you feel sh*tty for being sick or not feeling well.

You take multiple long family trips (13+ hours) and she barely speaks a single word to you the entire trip.

She complains about all the negative ways her mom has/does treat her dad and says she can’t believe he never divorced her, and you realize all the things she says is exactly how she treats you, but you are afraid to say anything because you know how she will react.

They use “I’m just a direct person” as an excuse for being an *sshole to you.

My God I could keep going and going. But more than anything I just realized how correct I was in telling her I wanted a divorce the other night. Despite all the blame, harsh words, triangulation I’ve received since then, writing this is enlightening.”

In the comments, tell us what you think are the signs that you’re being manipulated.