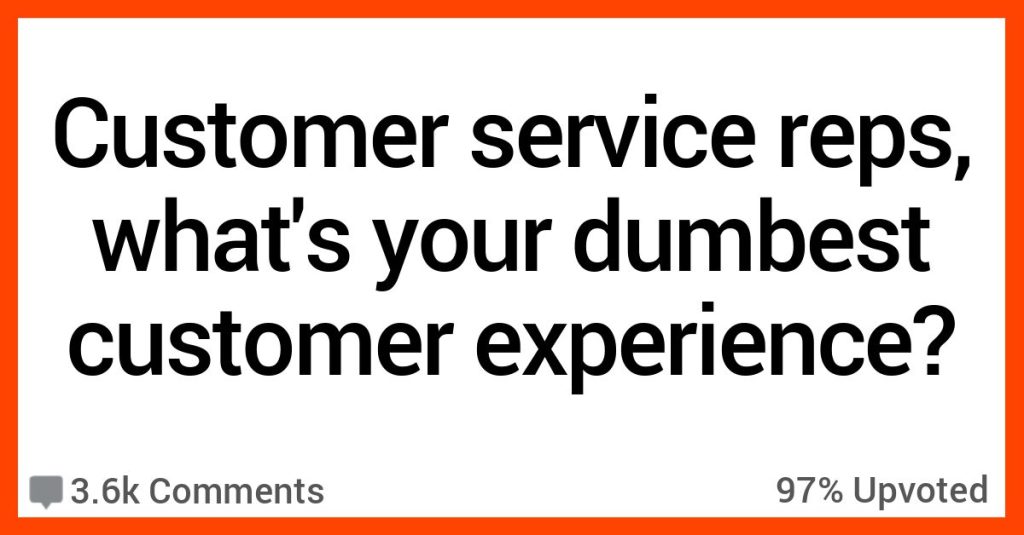 If you’ve worked in customer service before, you’ve probably been asked so many dumb questions that don’t even remember all of them.

In my previous life, I answered phone calls at the IRS, and once had to inform someone when tax day was – and that it was the same day every single year.

When I was a waitress, someone sent back their buffalo wings because she “didn’t know they were going to be spicy.”

It’s just one of those things you get used to, because there’s no choice – but these 13 stories are so good/bad that they stuck in these people’s memories forever.

Here are a few favorites as a bartender:

A drink is LIQUID. Bad Idea to shake it around.

Yes, the “no smoking” sign also applies to people who are addicted.

Yes, the people on the tables around you are drunk. And No, I’m not going to kick them out. (srsly, what were they expecting when entering a bar at 2am?)

You Still have to pay the entire meal, even though you only ate half of it. (especially because they asked us to pack other half for them to take home)

No you’re not allowed to test our liquor by taking a shot unless you buy a shot.

The kitchen door as well as the backroom door are closed for a reason and that reason is not to hide “the good stuff” EDIT: I was informed by my cook that he is, in fact, “the good stuff”

Your Kid is not going to get alcohol from me. (most of the time I can kinda understand the question, as legal drinking age when accompanied by your parents is only 14 for light beverages here in austria, but that kid looked like it still went to primary school!), and I don’t care that it’s his birthday.

No we’re not running an illegal smuggling business in the back, you just watch too many movies. (also, did you really believe that I’d tell you if it were the case)

No you can’t pay in insert weird Cryptocurrency here (I’ve had that twice, AFTER explaining to them that we don’t take CC)

I don’t know your “regular”. You’ve been here twice, and one of those times I wasn’t even working.

A very pissed high society woman came to the store saying her brand new 3000 dollars Microsoft surface bought by her husband was defective because she could not get internet when she was on the move. I wondered if she had a version with a 3g/4g Sim card but quickly realized she was talking about wifi.

I tried explaining to her how wifi works and that she could not use her own wifi outside her house but could share her smartphone internet connection. She would have none of it. She said I was lying to her and making fun of her and asked to speak to my manager who then proceeded to tell her the exact same thing. She left almost screaming…

3. Everyone’s got a sad story.

My business is not a charity. We don’t give you whatever you want just because you have a sad story.

My mum once went on holiday across the country and asked me for the home WiFi password cause the hotel she was in wanted her to pay to use theirs. “But I have it at home!” She didn’t get it and thought I was being so cruel not letting her use it.

In a couple different lines of business, I’ve had women start to give me the “I’m a single mom” sob story and I say enthusiastically “I am too!” and you can see the wind go right out of their sails that I’m not going to cut them a deal out of pity.

I worked at the airport and someone wanted to go through TSA with a 2 liter bottle of Coca Cola. I calmly explained that liquids weren’t allowed through security. The man gave the most genuine chuckle I’ve ever heard and said “oh! This isn’t Coca Cola! It’s gasoline!”

My coworker beat me to a reaction cause he very loudly exclaimed “What the fuck???”

You can’t apply a coupon if you 1) don’t have it with you and 2) doesn’t even apply to wtf you ordered.

8. If only that first one was true.

That owning a fitbit does not make you skinny and today I had to explain to a couple that just because the amazon echo box doesn’t state that it uses wifi.

It will still use it as it needs it to be a smart home device.

My first job at 16 was Party City. One day, I’m blowing up balloons at the balloon counter and a lady comes up to buy some latex balloons. I ask if she wants us to fill them and she said no, she’d do it at home. Making small talk, I said oh you must have one of the party time helium tasks at home.

“No, I blow them up with my mouth. You just put the string on them and they float!”

I do the multiple blinks, trying to work out in my head what she’s just said. She fully believed she could blow up the balloons with her mouth and the magic was attaching a string. I tried to give this woman an impromptu chemistry lesson. She insisted.

I still think about that magic woman to this day.

10. This happened on Seinfeld.

11. I think you’ve found the problem.

That I couldn’t help them diagnose their internet connectivity issues if they don’t find their modem’s power cord.

I understand you want to protect your personal information but I cannot send you what you want unless you give me your address!

That if you order ice cream for 4 people on a hot summer day, but the 4 people are still like 30 minutes away, said ice cream is going to melt before the 4 people get there.

And no, that is not my fault.

You need to take the suppositories out of their foil packaging before you use them.

He complained that they didn’t work and were uncomfortable.

I bet they were.

15. You’re not the only person here. Surprise!

“You’re not more important than any other customer, which is why we sold (whatever you’re looking for) to people who came in here before you.”

People really show how narcissistic they are; they’re offended by the world not revolving around them. You genuinely get people who can’t believe a store didn’t refuse to sell items to other people, on the off chance that the main character comes in and wants one.

Also “It’s sold out because you waited until 2 days before a holiday and other people came in a week ago.”

I used to be a pharmacy tech, when translating the directions from the doctor to what is on the label the pharmacist once told me to assume that the person is an idiot.

17. The moment of silence that must have followed.

– Hello, I made an online order and I see that you’ve charged me “X amount” for shipping cost twice.

– You are wrong, I’ve made 2 orders and I’ve already paid the shipping cost for the 1st one, I shouldn’t have to pay twice.

– Oh, I see! You’ve made 2 orders, sure, we can make it one package and only charge you once for the shipping, but can you tell me the order numbers for your orders, because the system shows me that you’ve only placed one today.

– Yeah, the second one was not placed today…

-…When was it placed sir?

– I don’t know, like 3-4 months ago, but still, I’ve PAID for the shipping cost before, why would I have to pay AGAIN?

The library does not stock every book in existence.

Also, the library has a finite number of copies of each book it does have.

You are not the only one to have the brilliant idea of borrowing an insanely popular new title instead of buying it.

– Hello, I’ve placed an order, paid with Paypal but you still haven’t sent my items.

– <Checking order #>, Sir, you’ve chosen to pay with Paypal but didn’t actually complete the transaction, we didn’t get any money.

– But…I’ve chosen to pay with Paypal. What do you mean? It’s there, “Paypal”.

– Yes, you actually have to complete the transaction, we didn’t get any money.

– Then what’s the point of having Paypal if I have to pay with my own money??? It’s there, “payment from Paypal”! Ask THEM.

Years ago I worked in student housing at a university and had to explain to a father, for well over an hour, that I could not make sure that his daughter was in her room by 8 PM and ensure that she never spoke to boys.

– I’m sorry sir, I don’t know you or what your usual is, can you please tell me what you’d like and your info?

– I don’t know you sir, there are like 15 people working here, we’ve never spoken again.

– X hasn’t worked here since <10 months ago> sir, I cannot ask him who you are and what you want. Please tell me and I’ll take care of it.

22. Unsurprised this is a thing.

I worked at a college. Dear Christ the helicopter parents!

“Can you look up the transactions on my child’s account and send them to me?”

“Because your child is a legal adult and we protect their privacy.”

“I’m their parent. They don’t need privacy from me!”

“That’s between you and them. The laws protect their privacy from everyone including their parent.”

“Im their guardian and entitled to this information!”

“Without a court order, 18 year olds (or 22 year olds for that matter in some cases) do not have legal guardians.”

“I’m going to report this to the Dean!”

“Please do as it will let them know I’m doing my job.”

That we sell stuff for a higher price than we buy it in for.

A dialogue I actually had to have with a grown-a$s adult:

Him, pointing at the price tag on a shirt: “Excuse me, what do these numbers represent?”

At least he was friendly.

25. Side-eyeing that last one so hard.

Oh, so so so many thing.

If you wish to return an item you must present the item and your receipt. I cannot process a refund if you have neither.

No, we do not sell asbestos. No, I cannot order some in for you.

When water boils it does indeed produce “bubbles”. If the water is bubbling once it reaches temperature your kettle is in fact working properly.

Zip ties are not simply ‘disposable handcuffs’. They can be used for other purposes and it should not be concerning nor surprising that a hardware store sells them.

I’m not sorry that time in my life is behind me.

If you’ve spent time working in customer service, please, tell us your best story in the comments!