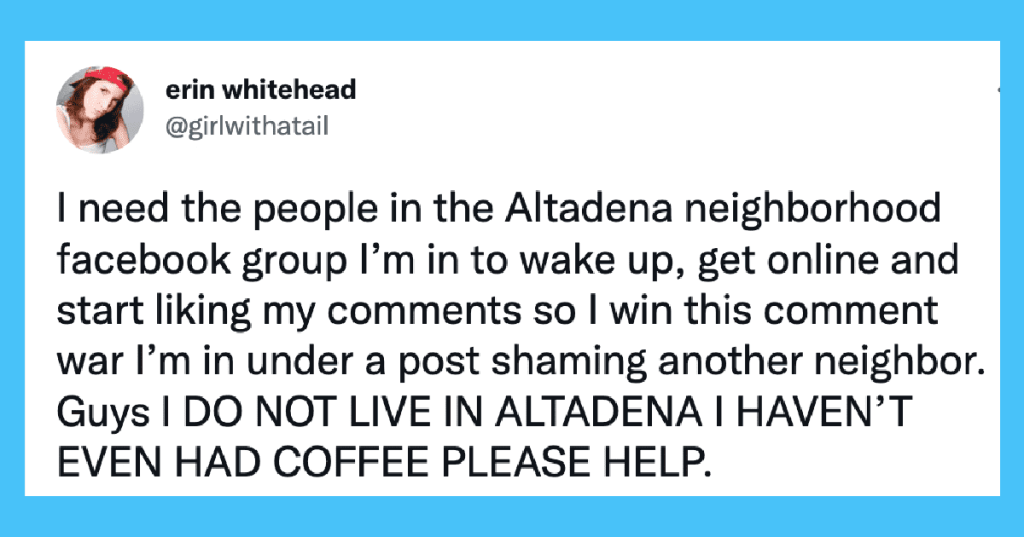 25 People So Mad They Took Their Neighborhood Beefs Online

If you live in the suburbs, there’s a good chance your neighborhood or city has a neighborhood group on Facebook or apps like NextDoor.

They’re great for staying up to date on what’s going on, but they’re also rife with people arguing over nonsense and spewing political opinions no one asked for.

These 25 people definitely found themselves in deep, and they were so angry, that in-person drama just was not enough.

Just to be clear, here.

23. You know the difference.

Whether you want to admit it or not.

22. Seriously, is there anything more controversial?

Dogs, veterans, everyone is anti-fireworks!

They broke out alllll the fancy words.

Someone please tell me this is a troll.

18. There are no exceptions.

I assume y’all know what you did.

Sounds rather ominous, don’t you think?

This man posts reminders like his almost daily. He is like the Paul Revere of Car break-ins from nextdoor

Those are some sidewalk chalk skills.

chalk slay ? hoping to piss off some of the idiots in my neighborhood facebook group pic.twitter.com/3MAoUBCw8d

14. This is downright hilarious.

Some folks just can’t help it.

I need the people in the Altadena neighborhood facebook group I’m in to wake up, get online and start liking my comments so I win this comment war I’m in under a post shaming another neighbor. Guys I DO NOT LIVE IN ALTADENA I HAVEN’T EVEN HAD COFFEE PLEASE HELP.

I’m not sure I want answers to all of them, however.

Sort of a compliment, really.

I think I just murdered someone in the neighborhood Facebook group. pic.twitter.com/Gz17aiLJPU

I think it’s clear that someone is getting haunted, though.

Honestly, just let them have their delusions.

9. Good luck with that crusade.

Are we sure the wife doesn’t like it, though?

Put a shirt on for Christ’s sake!!! from nextdoor

8. Don’t mess with the Boomers.

They do know how to use Facebook, contrary to popular belief.

ok literally i think the senior citizens in my neighborhood bullied this girl off of nextdoor, her account seems to no longer exist

Hopefully they have a grandkid or two that can help them out.

Stop posting to my email from nextdoor

6. Won’t somebody please think of the children??

Because the Boomers ain’t about it.

neighborhood facebook group wants to get a summer camp cancelled because it's going to shut down one block of parking spots ? ?

The wild animals do not care whether or not this is an affront.

My favorite neighborhood Facebook posts are when someone complains about poop on the hiking trails and posts pics as evidence, and someone replies “So that’s coyote poop. Many animals live in the woods.”

4. Well this is awkward.

At least someone had the courage to say it.

Babe you putting this on Nextdoor proves their point. pic.twitter.com/z67lBdSEqK

Just a normal Sunday afternoon getting into fights in my neighborhood Facebook group pic.twitter.com/uuA6zAdHp2

2. The president totally has a say over ding dong ditch!

You kids better watch out.

I was curious if Nextdoor was talking about the kids who dingdong ditched the neighborhood last night and Nextdoor Boomers are losing their utter shit that some kids *checks notes* rang the doorbell and ran away.

Though not the Muppet one.

shoutout to the guy on nextdoor who posted this image captioned only "Animal?" pic.twitter.com/OX4sV9Z6LR

Y’all, this stuff is funny to laugh at as long as its not happening to you, but seriously, be safe out there.

Have you ever found yourself in a neighborly feud?