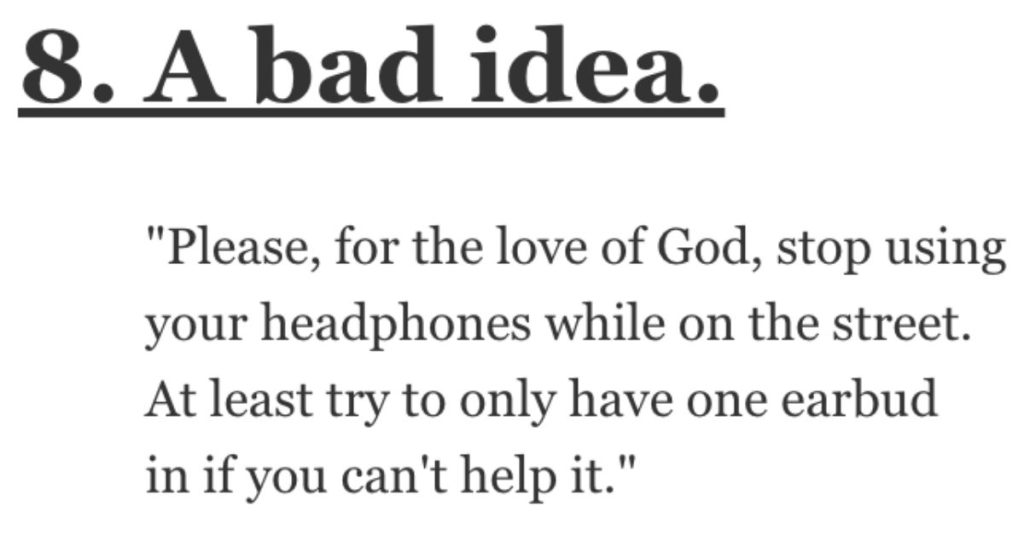 25 People Talk About Street Smarts They Think Everyone Should Know

It’s sad, but true: bad things can and do happen anywhere and everywhere.

Big cities, small towns, out in the country in the middle of nowhere: you have to keep your eyes open or else you could be taken advantage of or find yourself in a situation that could be dangerous.

So it’s important to know some basic street smarts no matter where you live or how old you are.

AskReddit users talked about the street smarts that they think all people should know. Let’s take a look.

It doesn’t matter how angry you are or what they said to you. Shut your f*cking mouth and walk away.

“Never flash your whole wad of cash in a public place while paying for something.

Keep a few bucks loose in one pocket for spending. Keep the majority of your cash in a separate pocket.

Don’t open a wallet full of all your money where other people can see you.”

A lone assailant will often use the element of surprise to their advantage. If you’re walking alone and someone is following you, make eye contact to let them know that you are aware of them. This will often dissuade them from attacking.

This tactic has worked for me in the past.”

“This reminds me of a comedian who was saying the best way to stay safe in a rough neighborhood is to fake a Russian accent cause Russians are terrifying.”

“Here are a few of street smarts that makes it harder for pickpockets to steal your stuff:

Do not keep your wallet in the back pocket of your jeans. This is a super easy place for pickpocket to take it from.

Be especially aware of your belongings when there is a bit of pushing, like when entering a subway or metro wagon.

Be alert in situations where a potential group of thieves try to distract you for example by asking you for directions on a map. While you are distracted by showing the person the directions another thief will open your bags and take your stuff without noticing.

Another thing to lookout are people in European cities asking for cash donations for the blind, deaf or handicapped. The huge majority of them are not for real charities but just to A) get some money from me and B) more importantly for an accomplice to see where you store your wallet.”

“If you’re alone on the street and you think you’re being followed, immediately call someone, forget about conversation starters, and give away your location. You should add ” I think I’m being followed”.

Speak loudly enough so the person you think is following you hears you doing it. If you’re right and they were following you, that will be a big turn off. If you’re wrong you have nothing to lose.”

“It might sound harsh, but if anyone approaches you and asks to use your phone for anything ( especially emergency-related ), don’t fall for it.

They will usually tell you what the “emergency” is, so walk away, tell them you don’t have a phone/whatever, and for your inner peace call the emergency and give away that person’s location. Tell them exactly what the person told you.

Either they really needed help and you’re sending it their way, or they tried to trick you into something horrible and will most likely try it again with the next passerby.”

“Please, for the love of God, stop using your headphones while on the street.

At least try to only have one earbud in if you can’t help it.

It’ s not healthy (ear fatigue, potential risks to your hearing,etc.) but at least it won’t completely cover the background noises.”

“If you’re walking and someone approaches, don’t break stride. You can carry on a conversation while walking, but people who are looking to proselytize, sell you something, or mug you will want you to slow or stop to address them.

If they want to chat, make them keep up with you. You can even tell them that you’re in a rush but would love to talk and walk.

It’s a subtle power game. Keep going where you’re going, and you retain your power. Stop and cat, and you’ve given it up and opened yourself to possible problems.”

“Pay attention when you cross the street on foot, no matter who has the right of way.

Vehicles will destroy you!”

“Walk fast and look p*ssed off.

This is how I deal with people on the street trying to market stuff to me.”

“Be aware of surroundings, look like you belong either through body language, attire, or occupation (without being oblivious to things around you).

The moment you look lost, out of place, or unsure is the moment you can look like a good target. If someone is looking at you with an expression questioning why you are there, be prepared to answer it with confidence and give an answer they would accept, or be prepared to leave before they can ask.”

“Situational awareness would probably be the biggest thing I’d stress to people.

These days everyone’s so buried in their phones, they don’t pay attention.”

“If you can, control the situation. Your gut instincts are often right, and when they’re telling you to leave, you should.

Sometimes people prevent that from happening, but as a general rule I try to control the situation by LEAVING.

“I grew up in a a pretty rough neighborhood in Chicago and probably the best thing you should do when walking by yourself at night is pay attention to every car.

Usually they’ll drive past you and scope you out, if you look like a target you’ll see that car again, or they’ll meet u farther down your path while you’re walking past an alley.

Always be ready for something when walking past an alley and stay close to the houses, that way if anything’s suspicious, you can run into a backyard.”

“If there is one house that looks occupied on a mostly empty street with burnt down houses……that’s a trap house.”

“Walk with a purpose.

Act like you belong and you’re 100% in charge of yourself.

This will probably keep you out of trouble 99% of the time.”

“Before using any ATM, tug hard on the plastic card reader.

Scammers often put a fake one on top that steals your info.”

“When walking in an unfamiliar city…or trail, look back regularly.

It will help you to remember landmarks that will guide you back home.”

“Street smarts to give your kids: if you get lost, find the the closest adult with kids.

I saw this in action once at Disneyland when a 4 year old kid approached me and my kiddos while we were eating. She joined us very calmly, introduced herself, and said her parents gave her the above advice.

I heard her parents shouting her name not long after, and the relief on their faces was a sight.”

“Never drink/ do drugs in situations you don’t know about.

Could be someone spikes it, takes advantage by robbing, rape, kidnapping whatever it is.

“Nobody approaches you on the street because they want to do something for you.

It’s always because they want something from you.”

“If a group of people suddenly get down, so do you.

I was walking in North Minneapolis omw to the gas station with my head phones in. Pretty busy main street that runs through it (Lowry). I’m listening to music and I noticed everyone just dropped at the ground.

I had no idea what the f*** was going on so I was looking around, why is everybody on the ground. Me not putting two and two together. Someone had just did a drive by on another car about 200 feet up the street. Real scary sh*t.”

“Every answer on the street in a not-so-nice area is NO.

“Hey can i have a cigarette?” No

“Hey can i borrow your phone to make a call?” No.”

What are some street smarts you think everyone should know?