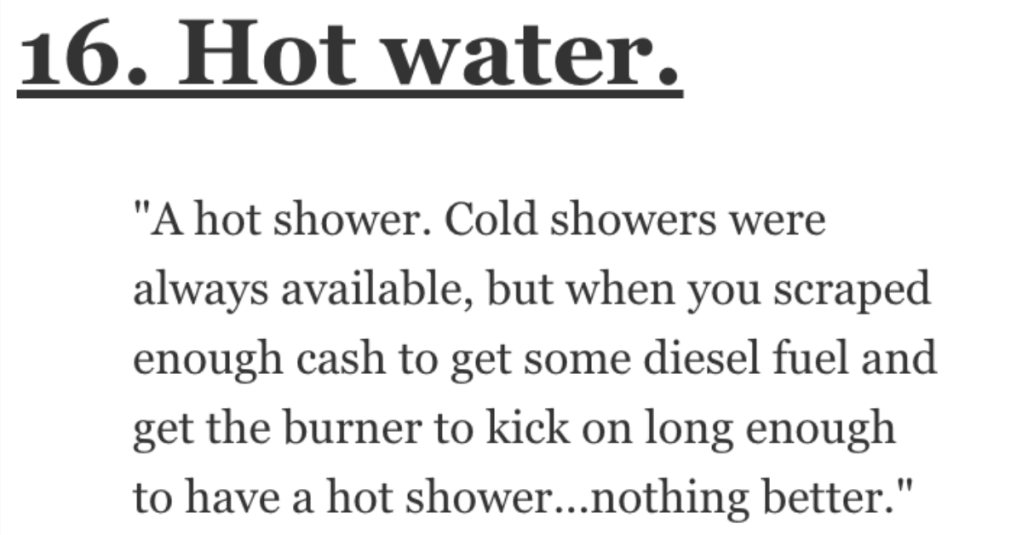 It’s interesting the way we grow up affects the rest of our lives.

A friend once told me that their grandmother used to save pretty much everything that could be reused or repurposed around her house. And I do mean EVERYTHING.

The reason was that she grew up during the Great Depression and those hard lessons stayed with her throughout her whole life.

Folks who grew up poor, what did you consider to be a luxury?

Here’s what people on AskReddit had to say.

It’s gotten to the point where I can’t eat in the morning because my body is so used to waiting.”

“Going to the movie theater!

I saw a grand total of, like, three movies at the theater when I was in high school. My classmates would be discussing movies that had just come out and I never knew what to contribute to the conversation because I had not seen them yet.

Finally started seeing movies at the theater when I started earning my own money.

It also wasn’t very common for high schoolers to hold part time jobs, although I’m not sure now?”

“I don’t know if anyone can relate, but in about 3rd maybe 4th grade, me and my twin brother had a music class where we were both required to buy a recorder, like a plastic flute thing.

Well my mom said we didn’t have the money so my twin brother and I tore the whole house up in search of $6 for two recorders. We brought a Ziplock bag full of change pennies, nickels, dimes etc.

I think the teacher felt sorry for us, cause she paid for our recorders when the rest of the students left the room. Gave us the Ziplock bag back.

“Brand name cereal was for the upper class, man.

Every time I saw Reeses Puffs on top of the fridge, I knew tomorrow was gonna be a good day.”

“Grew up pretty poor in Arkansas in a trailer.

I literally got a door to my bedroom for Christmas one year.

It probably still was the best gift I ever received.”

“In middle school I was on reduced school meals so it would be .40 for lunch.

So my parents would always give me 2 quarters every morning for lunch, now the cafeteria would also sell cookies which wasn’t part of the lunch set for .50 each.

So saving .10 each day I could afford one cookie by Fridays lunch. Good times.”

I don’t remember having a new winter coat until I was probably 14 or 15, they had always been hand-me-downs from my cousins.

They were usually at least ten years old by the time I got them and the stuffing would be all clumped up.”

“School parties where everyone brought something to share for lunch.

“If you don’t bring something, you don’t get to participate…”

I brought two carrots after not being able to afford school lunch for two years. Even the teacher laughed at me.

My young self just decided that day that some people don’t deserve lunch.”

“Staying at someone’s house who wasn’t poor, like a relative or friend.

Their house was also so clean, beautiful, pictures on the wall, knick knacks on the counter, and carpet you could play on because it was clean.

I spent my entire teenage years hiding where I lived.”

Cold showers were always available, but when you scraped enough cash to get some diesel fuel and get the burner to kick on long enough to have a hot shower…nothing better.”

I grew up pretty poor (no TV, no toys, but had a Sears catalog). My dad got in a serious accident when I was in 4th grade and almost lost his life. He won a small settlement from the community college he was working at and I was able to buy new clothes for the first time in my life.

Before this all I ever had were hand me downs from my cousin and donation clothes from the church. Most were worn to the point of having patches on the knees.

The worst part about getting new clothes for the first time is I felt terrible the whole time picking out new clothes because I always felt like a financial burden to my parents. I remember going to Miller’s Outpost and picking out typical 80’s clothes (OP, TnC, etc.).

It’s funny how growing up poor affects my everyday choices, for better or worse. I’ll never outgrow some of the feelings I had as a poor kid and I feel for any kid who has to endure a childhood of poverty.

It will affect them and their choices for the rest of their life.”

“Honestly, I didn’t know that Pasta Roni was $1 until I was a grown man. I thought that was some gourmet sh*t.”

The kids would be all like “what!? you’ve never been to XYZ amusement park!?”

No, Trisha. My family doesn’t even have a car.”

Which is another luxury to me.”

“Being allowed to turn on the heat during the winter.

And also being able to hire a professional to fix broken appliances, plumbing, etc.”

I remember having a whole bottle (those smallish glass ones that came out of the machine for 10cents) of soft drink to my self instead of sharing 1 bottle between all 7 of us.

I was perhaps 5 years old. I still remember this as the best thing ever.”

“I wore hand-me-downs or thrift shop clothes because we couldn’t afford all new ones. At the beginning of the school year, my mom would give my siblings and I $50 to spend on new clothes plus we’d get a new pair of gym shoes.

I struggled to pick out new things because I knew she and my dad were giving up something for us to have new things. Often, I’d get a couple of things and ask her to save the rest for later, then I’d pick out the cheapest shoes I could.

Even now, buying clothes for myself is super stressful and I only buy when it’s on clearance or at Goodwill.”

“I almost never even had winter coats since all my older siblings were female. I would just wear a decent hoodie over a ton of layers of old clothes.

When I got my first new coat, I experienced warmth like I had never felt before and it was so amazing.”

“I remember in 8th grade on my birthday at school one of my teachers asked me what gifts I had received. He asked in front of the whole class, I excitedly shared that I would be getting contact lenses.

My parents let me choose one thing that I wanted and I desperately wanted to stop wearing the broken glasses I had, which I usually didn’t wear. One of the boys in class made a comment like “contacts aren’t a present..?”

And my teacher had to explain to him- again in front of everyone- that for some families they were too expensive not to be a luxury. After that experience I worked two and three jobs in high school so I could buy myself and my brothers the things we needed.

The first thing I bought with my money from my first job as a hostess at a diner was a queen size bed because my twin mattress was about 20 years old and at 15 I was having back problems and issues with rusted springs poking me.”

Sometimes we had a jacked up old window unit that would cool down my parents room on the hottest of summer nights and we would sleep in sleeping bags on their floor.

Sometimes it was broke.

Sometimes it just wasn’t hot enough to justify running it.

Never during the day though, that’s what the library was for.”

We bathed every night, but it was by heating up water (that we would go to the park down the road to get in 5 gallon jugs) and filling up a mop bucket to wash off with.

Staying over at a friend or family members house and getting to take an actual shower was amazing though.”

“Until the age of 12, I thought that you weren’t allowed to buy things that weren’t on sale.

My mom only bought things when they were on sale and/or she had a coupon, so I thought that the “non-sale” items weren’t being sold.”

“Parents helping out with homework and school projects.

They can’t do that if they always work 3rd shift.

My projects were always notably worse than everyone else’s.”

“Renting a movie from blockbuster the first weekend of every month.

My brother and I got to pick any movie we wanted as long as it wasn’t rated R.

On really special nights, we even got a 2-liter bottle of Sprite for the family to share.”

“KFC take out was the best night of the year growing up.

What did you consider a luxury when you were growing up?