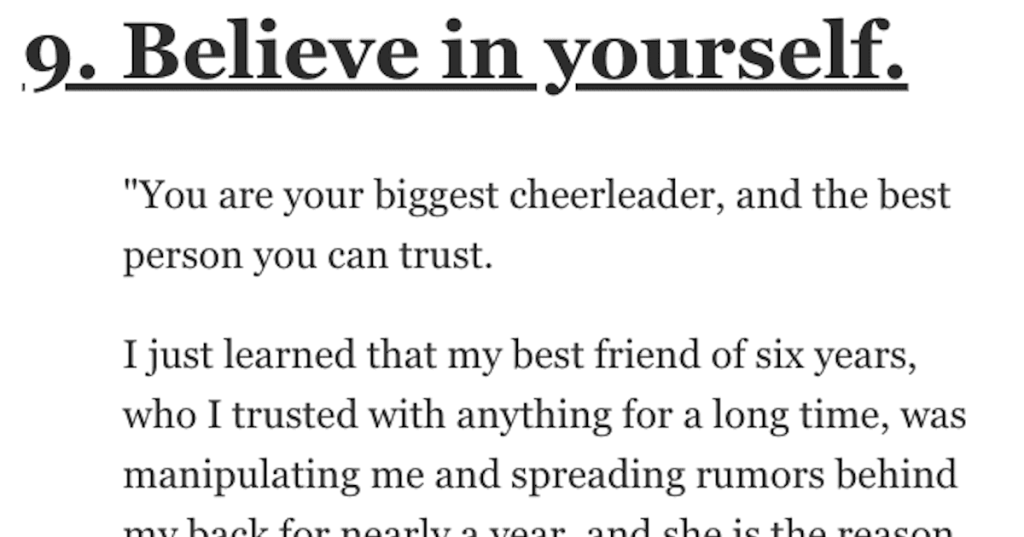 It’s part of the process of growing up and learning about the world, but sometimes life can be downright cruel.

Things that you thought would be easy turn out to be really difficult and other things that you believed were going to be awful end up being no big deal. Life is funny that way.

You live and you learn, people…

What’s a hard fact of life that you’ve learned?

“My obesity is my own fault.

A bit of background, 8 years ago I was diagnosed with PTSD after leaving a seriously abusive relationship, since then it’s been purely emotional eating.

Until recently I blamed my weight on the PTSD/stress and found excuses but this last year I’ve been mentally healthy and found I have less and less bad days. That being said I’m still over weight and I’m still overeating.

I live alone so I have no one to fell guilty in front of but genuinely feel so low after a binge and end up really disgusted with myself.

I’ve tried so many times to start up but the motivation leaves me so quickly its pathetic.”

“You’re stuck with yourself for the rest of your life, no one else.

“My parents are getting older and that scares me.

I’m not ready for them to go.

I would gladly give them some years off my life so they can stay with us a little longer.”

4. You gotta find the bright spots.

“That I’m going to die alone and no one is going to care.

I’ve long since given up trying.

“Some people are better than other people, naturally.

This isn’t based on race/gender/s*xuality/economic circumstance or anything like that.

But some people are born better.

All humans aren’t equal in terms of their potential and aptness– even if they should be treated equally legally/socially/morally.”

“You need to watch your own back because no one else has your back.

Even the best of friends will backstab you if the need for it arises.”

“Family isn’t always there for you.

Sometimes you have to either go it alone or make a DIY family.

Your boss doesn’t care about you.

Your government REALLY doesn’t care about you.”

“You are your biggest cheerleader, and the best person you can trust.

I just learned that my best friend of six years, who I trusted with anything for a long time, was manipulating me and spreading rumors behind my back for nearly a year, and she is the reason some of my other friends don’t talk to me anymore.

I’m in high school, so I thought these people would be like those people my parents talk about, the people they’ve been friends with since they were 14 or 15 or 16 and never fell out of touch with.

“If you are looking for someone to blame for your problems, look in the mirror.

If you want a solution to your problems, look in the mirror.”

At the end of the day, the people who take advantage over others are almost always going to be the most successful if they get away with it.”

“People mostly just wait for their turn to talk, they only rarely listen you you.”

“If you’re doing something right nobody ever notices, its only when you screw up that people notice.”

“The only person you can depend on is you.

Friends that you thought you’d have forever will move away and lose touch and (not to be morbid) people close to you will die.

With this in mind, you have to do what is best for you:

Don’t let your caring for these people hold you back because one day you’ll realize they’re gone and that you never got to do the things you wanted to do.”

“After losing a parent I’m very aware of my own and other’s mortality.

Mine both passed in 2017. Adult orphanhood sucks hard.”

“That not everyone you form a bond with in life is meant to stick around forever.”

“”It’s possible to make no mistakes and still lose. That is not weakness that is life.”

“You can only help a person so much until they have to help themselves.”

“I way overestimated my intelligence and importance growing up.”

“It’s not that the world is out to get you.

“Sometimes you can give your absolute all, 110% effort, but it just doesn’t fit.

You might be the world’s best florist, but if the person you try to make bouquets for is allergic to flowers, it’s over before it begins.”

Everyone will claim they do, but challenge a belief they are emotionally attached to and most of them will fight you to the death, sometimes literally, sometimes their own, rather than accept a fact they don’t like.”

“Loyalty to your employer means nothing.

I learned this lesson really early in my career. Literally the first real job I had out of college. I worked my *ss off because I was always told that the harder your work, the better off you’ll be. I worked crazy hours. 60+ hour weeks, on-call 24/7, volunteering weekends, etc.

Then the 2008 recession hit. I was the first one out of the door. Just walked in one day, boss came by my desk and told me to give up my badge and get out. No goodbye, no apologies, no recognition of the work I’d done for the year I was there. No nothing. Just get the f*ck out.

“Most famous people aren’t worth idolizing.”

Life isn’t fair and the universe doesnt give a sh*t about you or your feelings.”

“I could die tomorrow in my sleep, and it would take days for me to be missed.

And even then the number of people who’d be sad- not “aw, that’s terrible. So what’s for lunch?” but actually sad- is in a single digit.”

What hard facts have you learned in your life?