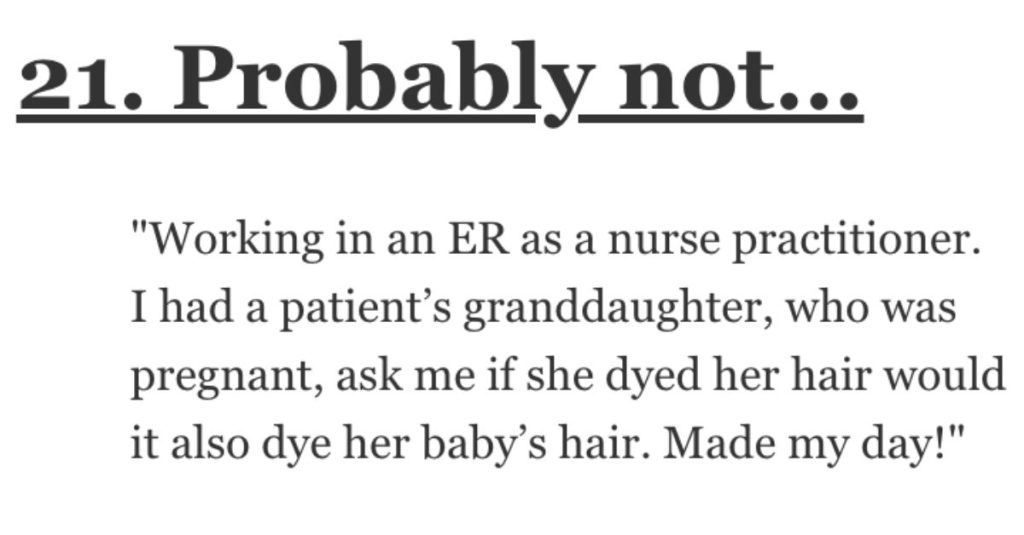 Medical Professionals Discuss Patients Were Clueless About Their Own Bodies

An old friend of mine from growing up is an emergency room doctor in Southern California.

When we hang out, he tells me some wild stories about some of the patients that he sees and some of the things they say and believe.

Leave the medical stuff up to the professionals, people! They know what they’re doing!

AskReddit users who work in the medical field open up about the weirdest misconceptions people have had about their own bodies.

“Baby came out face down .

The father freaked out his child was born without a face.

We had a good laugh after.”

“Had a mother ask if it was true that the soft spot of her baby’s head was “like a whale blow hole” that he could breathe out of.

Apparently her own mother had told her that.”

“Well, I had one girl that really thought if she had s*x in the shower she could not get pregnant because all the sperm must fall out and go down the drain.

Her boyfriend had been convinced as well…

They did, indeed, end up pregnant. There had been A LOT of standup shower s*x.”

“I caught a patient drinking his own urine once.

He thought it would help heal him, somehow.

I have never looked at a water pitcher the same way and I always check to make sure it’s water.”

“I had the father of a baby absolutely beside himself because his newborn baby had no teeth.”

“”What do you mean, I can’t eat an entire fruit cake? Isn’t fruit supposed to be healty?”

7. Missed that class, I guess.

“I had to explain to a pregnant woman once that the baby is coming out of her v*gina.

She was almost six months pregnant and was horrified, I think she thought all babies were just C- sectioned out.”

8. What are you talking about?

“I had a patient who needed a tooth extracted.

Young teenage girl, obviously very sheltered. She was telling me how bad it hurts and I asked her what she takes for pain.

“I apply a little clove oil to it when it keeps me up at night.” I asked if that works and she goes “Um… not really.”

When I told patient and mom to control post-operative pain with ibuprofen and acetaminophen, they looked at me like I had grown a second head.”

“There seems to be a common misconception that diabetes only needs to be treated temporarily and then it will go away, in the absence of lifestyle changes. I have seen this a lot in primary care.

“Do you have diabetes”

“No, I used to and finished my medication”

We work with patients with kidney issues. Our biggest misconception…

The product “No Salt” is totally safe to eat…..WRONG!

No Salt is a potassium based product to mimic salt texture for food…but now puts you into a whole new issue with having high potassium from frequent use, leading to cramping, arrhythmias, and even death.”

Provider takes a history asking if the patient could’ve been exposed to seafood or cross contamination. Have they eaten new food or at a new establishment? The whole nine. While being treated, patient adamantly denies this. They keep trying to figure out what the allergen could’ve been because it’s a pretty strong reaction.

Eventually the patient gets frustrated and admits they ate shrimp pasta but it CAN’T be from that because he took two tablespoons of honey first and “it coats things in there.” As in, shrimp can somehow not penetrate the magical honey fortress.”

“I’ve had male patients in my audiology clinic tell me they have fallopian tube issues.

Perhaps I shouldn’t assume they mean eustachian tube issues, but I do.”

““How are you feeling today?”

“Not great, I have a cough that starts from an emotion in my throat and chest. That emotion disturbs me.”

It was a bacterial pneumonia. His roommate is a neighborhood “spiritual guru”.”

“I offered a diabetic a tissue after doing a finger prick to mop the the 2 drops of blood on his finger.

He looked at me like I was an absolute idiot, said “you don’t know very much do you?” and sucked the blood off his finger. Then spend the next 5 min ‘educating’ me that because he was a diabetic, he needed all the blood he had.

Therefore he needed to ‘put it back into his body’ rather then wasting it by putting it on a tissue. He was under the impression that if he just drank his blood it would go straight back into circulation.”

“I’m in the mental health field but I met with a client who was worried that if their relative had a heart transplant would the relative still love and remember them.

The logic being that the feeling of love lives in the heart.”

I was reading through the nurse’s notes on the patient who explained that when they asked the patient how much they drink alcohol the patient said they never drank alcohol. They only drink beer.

This 50-something year old lady went through her whole life not realizing alcohol was in beer.”

“Aregnant girl who was on the pill asked why she got pregnant.

We discovered that one day she takes it, the next day it’s her boyfriend and so on …

That’s not what we mean by “sharing cost”.”

“A patient who just had his left leg amputated, asked the doctor how long it would take for it to grow back.

I thought he was joking and chuckled, he shot an angry look at me and I realized he was serious.”

A lot of older people who have been healthy most of their lives don’t understand you can make something worse by over doing it. That why I am here to tell you how much you can do and when you need to rest.

I went to school for it, seriously.”

“Working in an ER as a nurse practitioner.

I had a patient’s granddaughter, who was pregnant, ask me if she dyed her hair would it also dye her baby’s hair.

“Can you email me my medications?”

“Sure. I can send them electronically to any pharmacy you want.”

“No. Skip the pharmacy. Ain’t there some fancy schmancy way now you can send an email of some kind, and I just print it out and eat it, or I scan it with my phone and listen to it with headphones or summinorother?”

“Most heartbreaking one for me.

I worked for a bit in a horrifically medically underserved community. I asked a patient about medical history, he of course said he had no illnesses. I asked if he had diabetes and he said “oh yeah, but everyone does. I didn’t think that counted.”

He had no idea he was literally dying from his poorly controlled diabetes. We started dialysis that very day.”

“I had to explain that the human body is perfectly capable of cleansing itself internally. As in, there is no need to spend a fortune on “cleanses” and that both our upper and lower intestines do an extremely good job of if themselves.

I literally had to explain that Windex is not a replacement for topical astringents, since it’s active ingredient is ammonia.

I once had a patient that thought that sweat was literally sin leaving the body.

I had a diabetic patient that had to have his foot amputated and wasn’t worried because his friend said he’d donate his as a replacement.

Medication misconceptions. That somehow aspirin can be substituted for a patient that was taking half of what they need to extend the prescription.

I have about a hundred more.”

“A patient called in a panic.

He insisted that he didn’t want an appointment, just a prescription; specifically, the “Morning After Pill”. Well, that’s an unusual request. So, okay, you have my attention. Now I need to ascertain why in the world he thinks he would need that.

I should mention here that part of my job was to save the provider’s time by ascertaining exactly what the patient is being seen for. A blurb goes on the schedule, and the provider knows what the complaint is before going into the exam room.

Also, no physician is going to prescribe medicine without having examined the patient. The physicians I worked for patently would not do that. It’s unethical.

After calming down a bit, the patient explained why he thought he needed that medicine. He was involved in a tense marital separation for several weeks already. For whatever reason, he’d hired an escort for a naughty romp all weekend.

On Monday, he began to worry that he’d contracted a VD from the escort, and wanted “a do-over”. Yes, he actually said that. Hoo boy.

I made him a tentative appointment for that afternoon, in case he needed to be looked over or have a draw for a screening. I then referred the call to one of the more diplomatic nurses for a callback to explain….things.”

“I’ve had a few good ones, but the funniest actually happened during my first year of college studying PT.

Someone raised their hand in A&P early on in learning about muscles, their attachments, actions, and innervations…she asked why humans don’t have meat like cows, pigs, and other edible animals…

Prof stalled for a second holding it together, then asked if anyone else was wondering about this. Roughly a third of the class (perhaps 20 people?) raised their hands. She spent the next few minutes explaining/ convincing people that muscles are in fact “the meat.”

Have you ever heard anyone say something really off-base or weird about their bodies?

Tell us your stories in the comments. Thanks a lot!