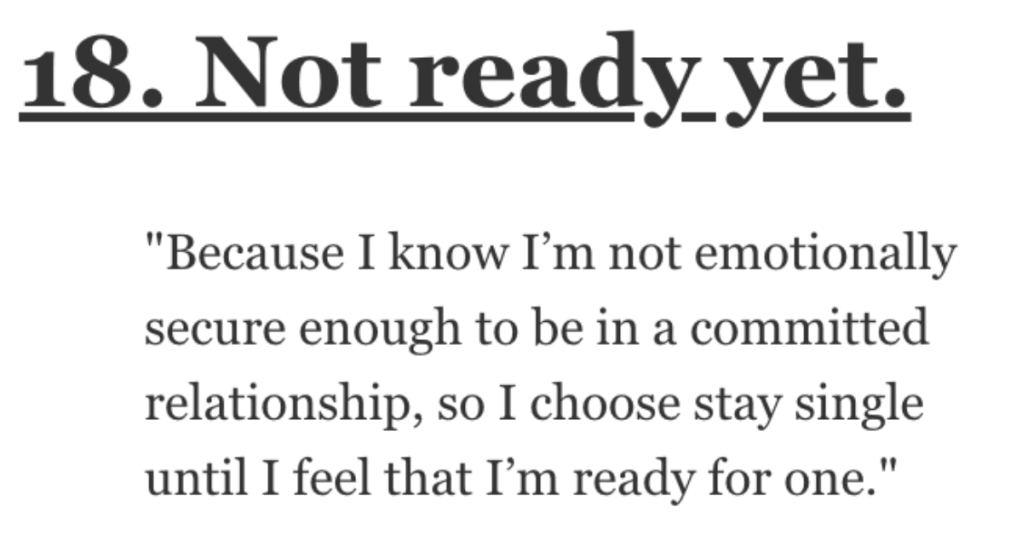 I’ve been single for quite some time now.

I’m not the kind of person who says I’ll never do or not do something, but I’ve been on my own for so long that at this point…well, let’s just wait and see…

But I’m open to the possibility and you never really know, right?

And, with that in mind, let’s hear from some folks who went on the record and admitted why they’re single.

I don’t think I’m attractive, and I want to get better mental health before I try dating anyone.”

“Because there’s very little market for pudgy, balding, was-already-ugly-before-the-weight-gain-and-the-hair-loss, not overly intelligent but smarta** enough to get on your nerves, earnings-limited, gamer nerds…”

I’ve had people tell me that they love me, and I’d go “aww, thanks!” and carry on with my day thinking it was the sweetest platonic compliment ever.

Plus I’, still not over my last crush. Huge d**che, only wanted to sext, and manipulated me into loving him. Fun!”

“I don’t want to socialize, no one likes me nowadays, I’m still studying, I still have goals I need to achieve, and I’m a little bit burnt out from school work.”

“After all I’ve been through with dating over the years, I just want peace, quiet, and the freedom to do what I want when I want.

“Because I’ve learned that I don’t like the idea of a romantic, seriously passionate relationship. Basically aromantic.

Also, who needs a lover when you can vibe with the homies?”

“I’ve been single my entire life, not even a grade school crush.

Honestly, I think there’s something wrong with me, but I’m okay with it at this point in my life.”

“Haven’t been looking. I’m not really good at meeting people and tired of endless rejections and friendzones chipping away at my soul.

So I’ve nearly given up on dating at all. But I’m comfortable being alone, it doesn’t bother me.”

“I got out 3 years ago and I don’t ever want to subject myself to that type of treatment ever again.

I’m trying to come to grips with the fact that I will more than certainly d** alone with no family around me when the time comes.

My father d**d recently and had my mother and brother with him at the time, and told us before he went that it was his biggest comfort—- having us all there with him.

“I have zero faith left in people.

I wasn’t made for today’s relationship.”

“Don’t have to answer to anyone.

Don’t have anyone to lie to me about their shady actions.

Don’t have to worry about any abuse.

“I don’t want to actively seek out a man.

I’m young, I’m starting my own life, doing what I want to do, going where I want to go, and if I meet someone organically then great! But I’m not going to force a connection with someone just because they’re convenient or because society pressures you to date.

Long story short, I am content on my own and I’ll be okay like that until I find someone. Then we will be content on our own, but together.”

“I just never got lucky really.

“Extremely closeted, never dated before, high anxiety, quite anti-social, and probably moving to a different state soon for job training so don’t wanna make and break a new connection in my current town.”

“I enjoy being single.

I’m demi-s**ual and its a pain to even get interested in anyone because I need them to be friends first. A lot of people don’t understand that and either call me a tease or say I’m too picky.

So I just don’t bother anymore. If I find someone I’m interested in, that may change but it’s been seven years and I’m okay with where my current relationships are at.”

“Because the last girl i liked said i was just a friend, and i’m not quite over it yet

And I also have the social life of a stone so it’s hard to just meet other girls.”

“I got played twice by the same guy.

I physically and emotionally can’t.”

“Because I know I’m not emotionally secure enough to be in a committed relationship, so I choose stay single until I feel that I’m ready for one.”

“The longer that you’re single, the harder it becomes to compromise on any of the freedoms you’ve become accustomed to.”

“A previous relationship caused me to have some serious commitment issues.

I can date people well enough, but once I hear them saying they love me or that I’m perfect for them or casual compliments in the same vein after however long we spend dating, I break inside thinking it’s just going to go downhill from here and I get wildly distant and eventually break up with them.

It’s happened twice now and as much as I love being in a relationship and h**e being lonely, I feel like such a massive a**hole because I effectively won’t allow myself to be happy. Let alone that I broke up with people I had no reason to other than my own internal struggles.”

“Because I’m one of those people who are not made to find love and happiness.

I think I’m simply not lovable.”

I seem to attract the ones that need help, but end up leaving afterwards… or turns out I cared more about them, then they did me. Dating apps are just draining, I’ve had plenty of dates but haven’t felt any real connection with anyone anymore.

I’m at a point that I’ve accepted being alone, and that I may not meet anyone, nor do I really care about it as much.”

“It’s very simple really, I rarely like people that much and those that I have liked in the past didn’t like me back.

And I was never interested in the people who expressed interest in me.”

“I refuse to ever make the first move and talk to anyone in public because it’s considered creepy.

Dating apps are full of people looking for money or hookups.”

“My first relationship was really toxic and manipulative.

“It’s half I’m not trying that hard anymore, and half nobody wants to take the chance.

I’m 34 years old. Been told by numerous girls (in relationships) how cool I am and how lucky any girl would be to have me. Some even wing manning for me. But, for whatever reason (a number of legit reasons too and not BS excuses), it just hasn’t happened.

I can’t even trust my own instincts and judgements because I’ve had slam dunks where she’s all over me, my friends and her friends are like “holy s**t dude, she’s in to you real bad and talks about you”. Then when I ask her out, she needs to reschedule, something came up, no’s not a good time. You get the picture.

Never had a girlfriend my whole life.

Can’t say that I’m unhappy though. I’m in a position in my life where I don’t need one because I like myself and have people I care for.”

In the comments, tell us why you’re still single.