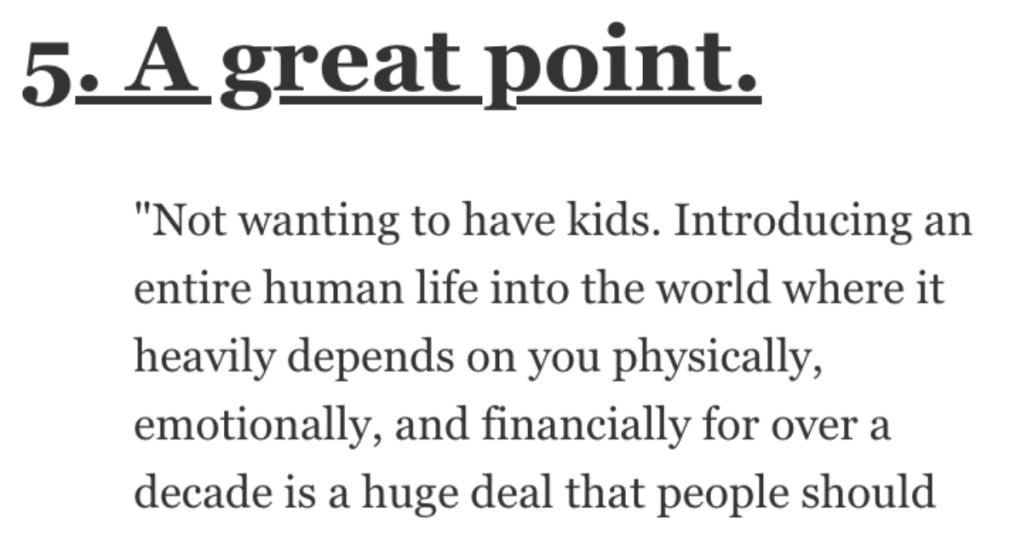 26 People Talk About Things They Think Are Seen as Bad, but Really Aren’t

This conversation will generate some pretty interesting responses, right?

Our culture is hyper-sensitive these days and when things are looked at in a negative light, you’re the enemy of the people if you like them…we live in a strange world, people…

Contrary to popular belief, what’s not a bad thing?

“Being frugal (to a point).

I think being able to control spending habits, save money, and being able to assess what items are necessary vs excessive in ones life is often overlooked in a consumerist society.

Until this year, I was using my iPhone 4 happily. Friends and family would constantly make jokes about my ancient phone and how I am just too cheap to buy a new one.

The truth was that it was still working fine and fulfilling all the needs I had for a phone. So why spend money to replace something that is still working!

Note: I am not advocating for the extremes of this like my previous roommate who refused to turn on our A/C or Heating. It once read 51 degrees F on our thermostat during December.”

“Not being super ambitious about your work/career.

I’m happy just being a cog in the machinery.

I earn a decent wage that affords me the things I need and enjoy in life, and I’m in a good rut in my daily routine, no need to exert a lot of energy to change that.”

There’s a lot of people who suffer with degenerative illnesses or are in extreme pain every day of their lives. I saw this happen to my grandad after he had a brain tumor, by the end it was for the best that he passed away.

Obviously untimely deaths are sad, but sometimes you need to accept that being alive, and truly living are two different things.”

“Going to dinner or a movie alone.

I love going to movies alone, especially at weird times. You can have the whole theater to yourself pretty easily.”

“Not wanting to have kids.

Introducing an entire human life into the world where it heavily depends on you physically, emotionally, and financially for over a decade is a huge deal that people should absolutely put a lot of thought into, yet many people do it simply because “that’s just what you do” and “babies are cute”, and then they’re constantly complaining about how it’s suddenly hard being a parent.

Parenthood isn’t for everyone. It’s a huge decision, people should treat it as such instead of acting like it’s a trend. I wish society would quit looking down on those who choose to live a more quiet and stable life instead.”

6. Hard to comprehend, but okay…

“Not liking animals. And this is coming from an animal lover…

Some people just don’t like them for various reasons and so long as they don’t mistreat them, they aren’t monsters.”

There’s nothing wrong with letting your emotions out.”

“Sleeping during the day and staying up all night.

Some people are more comfortable being up at night and sleeping during the day like myself.

I used to work a few overnight jobs and it’s disheartening how many people still look down on those who don’t wake up at the crack of dawn and go to bed in the evening.”

“Being “basic” in the sense that you have likes and hobbies similar to a group of people.

I feel even in the sense of being a basic b*tch with Starbucks and skinny jeans and Uggs.

Just because its a popular thing and is comfortable doesn’t mean its bad.”

If your family always have been a bunch of *ssholes to you, what is the sense of even having respect for them?”

It’s far less stressful than having other people around.

Not to mention we live in an insanely good time for being alone.

Not that I’m trying to twist being alone as a positive or something because I think for most people it absolutely is not, but if you’re into that then you couldn’t be living in a better time.”

It’s important to question why we do things and not just go along with it “because it’s been like that for years.””

“Being bad at the thing you spend hours doing.

I mean, you can always just do it for fun without actually wanting to improve.

Be it art, video games or singing.”

Thats like… the best thing for a child to be because they want to learn the facts and form their own opinions.

But parents act as if they’re like inappropriate or annoying.”

“Political leaders admitting they are wrong and doing a U-turn

“Not being into social media doesn’t mean you are behind the times.

Something about people not knowing everything about me and what I’m doing in my life is very peaceful to me.”

“Saying “No” when someone asks you to do something that they’re entirely capable of doing.”

“Disappointing your parents or friends by your life decisions.

Usually, they come around in time when they see what you chose is what makes you happy and that is what they really wanted in the end anyway.

It can be an uncomfortable wait until that time comes, but it is shorter and feels better than a lifetime of regret.”

Sometimes it’s better to end things instead of trying to hold a failing relationship together.”

“Not going to college is NOT a bad thing.

I say this with some level of authority on the matter as I am a college professor (full time, tenured, over a decade into the game).

I have seen hundreds of students go to college who have no interest in learning. They go because they are told they have to in order to secure personal success and financial stability.

So many of these students fail classes, destroy their GPA, don’t graduate, take out a ton of loans, etc… There are so many people with college degrees working in food service, retail, “hospitality”, etc… and none of them really needed a college degree at all. Yet they have one, they paid a ton for it, and now have to pay all those loans back for something they aren’t using.

And I get it. No time learning is time wasted. I truly believe that. But you don’t need to be in college to learn. If you major in physics but refuse to leave your town of 20,000 people and have no interest in teaching, it doesn’t matter if you got a 4.0, you’ll be working slinging pizzas regardless.”

“Gaming for a few hours straight.

If you enjoy doing it and don’t neglect your life, there really is no difference to binge watching something or reading a book.”

If you’re sensible and ensure it’s paid off at the end of every month, there are many perks.

I not only don’t need an exciting life, I actively don’t want one. One of my friends loves to travel and do crazy sh*t – scuba diving, swimming with sharks, going on days long backpacking trips…. not at all for me.

She cannot fathom the fact I don’t care for travel.”

I worked for a white-collar criminal defense firm for many years. Many of our clients would have saved themselves from criminal charges merely by letting their businesses fail.

I believe that knowing how to fail should be taught as part of MBA programs.”

“The stigma behind talking about your pay with fellow coworkers.

In the US it is legal.

By talking about your wages you help ensure you and co workers are being paid fairly.”

And being okay with being single and not constantly looking for a relationship.”

What do you think is portrayed as a bad thing, but really isn’t?