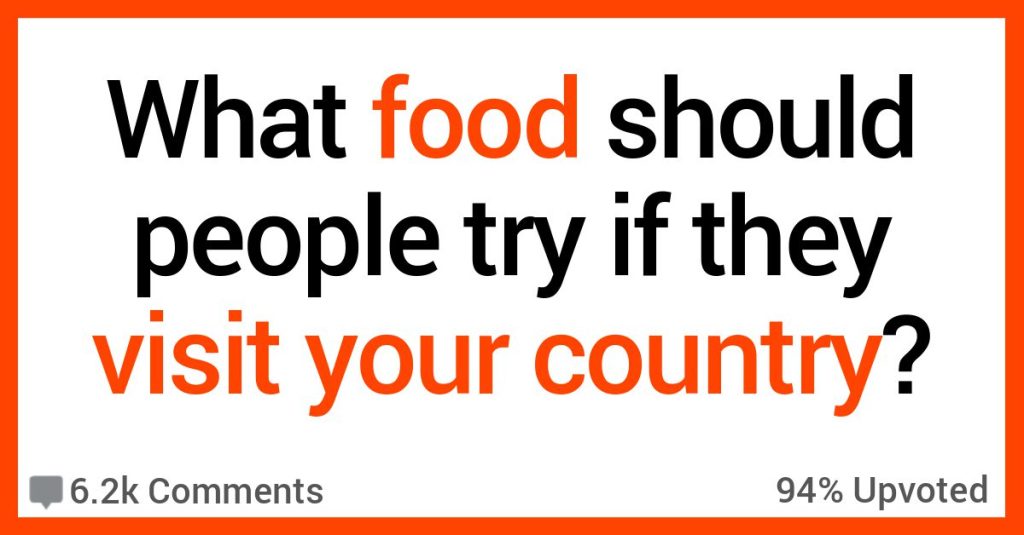 When I travel there are two things on my mind: drinking and eating.

Okay, I’ll check out some museums, too.

And yes, I’ll walk the streets for hours on end.

But the highlight is always the food and the drinks, friends!

And these responses gave me some ideas about some future trips.

AskReddit users talked about the food everyone should try from their respective countries.

Imagine Mac’n’cheese, but instead of noodles it’s with some dough stuff. And with onions.

I would kill for this dish.”

“If you want to try Vegemite DO NOT eat a spoonful of it or spread it thickly on toast.

You butter the toast then put a thin spread on.

I always cringe when I watch people trying Vegemite and eating a ton of it not even most Australians who have grown up on the stuff would like it like that.”

It’s a distinct thing, different even from British Indian. Lots of onion based gravy blended down to hide the vegetables, crisp fried pakoras, huge pillowy naan.

It wouldn’t be recognizable by an Indian person but it follows its own conventions – every Scottish Indian Restaurant will have largely the same dishes on the menu with some house specialities.

It’s the most comforting thing to me, and there’s probably an argument for it being the most authentic Scottish food – the vast majority of people here will have eaten a tikka masala way more often than venison or salmon.

And we love to argue about which place does it best.”

“A crab/seafood boil (if you’re up in Maine, USA).

It’s a delicious mess of crab, red potatoes, ears of corn, sausage, and whatever seafood you want to add like shrimp, mussels, lobster, etc.

You boil it all together in a big pot with old bay, white wine, and a bunch of other seasonings and then you dump it out onto a picnic table and everyone goes to town on it.

Taco Bell ain’t nothing compared to the original here in Mexico.

Also this plate called birria which is kinda like beef stew but with a little twist.”

“Fish and chips, out of the paper. Preferably eaten on the sea front, on a cool day. Mushy peas or curry sauce optional but delicious.

Alternatively, go to the black country and get the battered chips because for some reason it’s not enough that the fish is covered in batter, we must have the chips battered too.

And it is glorious.

While you’re at it, get some bread and butter and make a chip butty because that is comfort food. You want the chips hot enough to melt the butter a little bit.

A full English breakfast. And then you must also try a Scottish, Welsh, Northern Irish and Irish version at some point too.

And find a pub with a nice fire on a cold night and drink a pint of something local. We have so many breweries in the UK, so look for guest ales or ciders and try one. Most good pubs will recommend something.”

We also have morcipan but the most popular one is choripan hahah) and alfajores.”

“If you’re traveling to India, each frekkin region will have excellent and distinct cuisine.

Pork Vindaloo, Chettinad Chicken and appam, Bhapa Ilish (Hilsa fish coated with spices, wrapped in banana leaves, steamed), Makkai roti with sarson saag, vada pao, aloo tikki and other chaat, some mutton gosht and naan (I forget the name of the area now where this is found, in Mumbai).. these are just a few that come to mind.

Indian cuisine is so diverse and brilliant.”

“If you go to Spain, maybe try Tumbet.

It’s a Majorcan dish consisting of stacked layers of fried eggplant, zucchini and potato, with some bayleaf dressed tomato sauce on top.

It is a staple everywhere and you can select either steamed or roasted chicken. Rice is fragrant and cooked in chicken broth.

Pierogi (Slavic dumplings). Try cheese and potato pierogi, fried and topped with sour cream/bacon/fried onion. Also try sweet pierogi’s- with blueberries, strawberries etc. You can also eat them as is or top them with sour cream and sugar or a little bit of whipped cream.

Zapiekanka: toasted open faced sandwich that’s made on baguette bread. It’s usually made with mushrooms, cheese and topped with ketchup and green onions but there are MANY different varieties. It’s a very popular street food

Mizeria- made with either tomatoes or cucumbers. It’s a salad with vegetables and sour cream.”

“I used to live in The Netherlands and I love the country, but the food I was enjoying a lot was Kibbeling!

I can really just recommend it to anyone.

Eat it when you are in Rotterdam at the Maarkthall.”

“For Austria I would say Kaiserschmarren (sweet, a little bit like pancakes) and Gulaschsuppe (soup with vegetables and sausage).”

An omelette made of fries, eggs and spices (chips mayai).

“If you visit Mexico I always recommend mole, chilaquiles, and horchata water to drink.”

But also try bun cha if you are in Hanoi.

“In Finland we have a breakfast thing called “Plörö”.

Best enjoyed with a cigarette.”

“I love Käsespätzle with Speck and Röstzwiebeln — egg noodles with cheese, bacon and crispy fried onions.”

And of course a proper croissant.”

“Flæskesteg sandwich. Just go for it.

These are what I miss most about living in Denmark.

“Honestly the best thing is to stop in a Bar Mleczny (Milk Bar).

Every single one is run by weird clones of 2 old angry ladies, one is short and one is tall. One is fat and one is skinny.

You will pay next to nothing for an enormous plate of food and you’re pretty much guaranteed to love it.”

“Shwarma if you go to Syria.

I’ve had Shawarma in many places. Including a couple countries in the Middle East and USA.

Syria’s Shawarma is the absolute best. Too bad most people will probably never get to taste it.”

“Two things really, one that probably a lot of people will hate but it’s Soo good.

And the other one which everyone will love, stroopwafels!”

I know what you’re thinking. “What’s so distinctive about plain ol’ hot chocolate?” Or maybe, “[insert dumb Colombia drug joke here],” but let me tell you right now, there is nothing better on a chilly morning in the altiplano than a mug of hot chocolate to fill you with vim and vigor.

What makes our take on hot chocolate so different? Three things:

First, ours has a richer concentration of cacao. The rest of the world takes what is essentially sugar with powdered cocoa and mixes it with milk. Not so in Colombia. Our chocolate actually comes in bricks of pure cacao paste with a tiny bit of panela (unrefined cane sugar) and cinnamon. The result is a beverage that is less cloyingly sweet and more rich and flavorful, with a deep aroma that is at once sweet and nutty.

Second, preparation. This, too, is different in Colombia. Rather than grind our wonderful chocolate into dust, we make it by heating our delicious ingots of dark gold in an olleta, a tall pot that resembles a metallic pitcher, along with milk, cloves and a couple of sticks of cinnamon.

Once the chocolate softens, we take a molinillo, a type of grooved, wooden, mace-like whisk, and beat the mixture with a motion akin to that of prehistoric man making fire. The result is a light, foamy beverage that goes down smooth.

Finally, there’s the cheese. Yes, you read that right, we put cheese in our chocolate! I can see your brow furrowing even now, but rest assured, this is a soft, fresh, unsalted cheese (also known as farmer’s cheese or white cheese) that has a chewy texture, like unsalted mozzarella.

Drop a few pieces in your chocolate while you snack on a pandebono (cornflour sourdough bread) or a pandeyuca (pillowy, savoury manioc bread) and fish then out once they’re soft.

There are many wonderful dishes that make up Colombia’s cuisine. But as someone who doesn’t live there anymore, there’s only one dish I really truly miss, and that’s chocolate santafereño.”

In the comments, tell us what foods you’d recommend from your country.