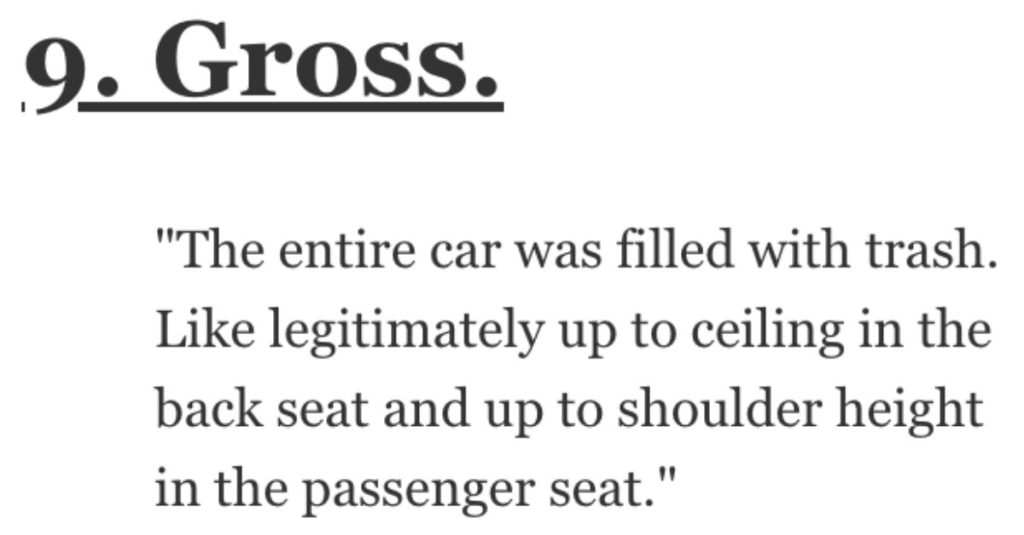 I worked in fast food places when I was younger, but I can’t say I was ever lucky enough to work a drive-thru…and I kind of regret it.

Because, based on these stories, it looks like every day is a wacky adventure!

AskReddit users talked about the craziest things they’ve seen in the drive-thru.

Let’s check it out!

“I heard a blowj*b taking place over the headset.

It was a location open 24/7 so we had to reset the tills for 10 mins every evening at 11pm so people would just sit in their car & wait.

Most people don’t realize that we could hear everything, the speakers don’t turn off while the vehicle is there.”

“Someone threw a fish at me once.

Didn’t order anything, just a drive by fish attack.”

“Someone pulled a gun on my brother because the salsa containers weren’t completely full.

You can get as many as you want for no extra charge.”

He started eating the tacos at the drive-thru window.

He was there for over 5 minutes, just eating. I saw him the next day in school, we both acted like nothing happened.”

“Had a customer come through with a giant grandfather clock in the back seat. The thing was so huge it was sticking out the side window, which just so happened to be on the left side of the car.

Which meant dude couldn’t get close enough to the window to reach his food and had to step out, cursing the whole time.”

“I worked at a Tim Horton’s and once saw an old lady with like 50 cartons of eggs in her car.

I made a joke saying “looks like you could make your own breakfast” and she got real straight faced and said “oh honey those aren’t eggs”.

“Two guys were hotboxing and decided to come to the drive thru.

They did not stop smoking even when they pulled up to the window. I swear a cloud of smoke rolled out the window when they lowered it to pay.

They offered me a hit and I politely declined.”

“I was working the drive-thru at Burger King in a snowstorm. Driver orders a coke with no ice.

When I hand them the coke, they empty it a bit, break off a couple icicles hanging from the car, put in the coke, and drive off without saying a word.”

“The entire car was filled with trash.

Like legitimately up to ceiling in the back seat and up to shoulder height in the passenger seat.

I was so stunned I nearly forgot to give them their food.”

“A woman drinking a tall boy of Budweiser. It was 530 in the morning at a Starbucks.

There’s also a guy that takes his 3 dogs for rides. They ride in buckled seats and wear goggles so the wind doesn’t hurt their eyes.”

“Dude had a full on s*x doll dressed up in his passenger seat.

Sunglasses, dress and even a hat. I couldn’t even tell it was fake until I asked for their order.

Coworker and I looked at each other simultaneously and we both said “was that a s*x doll?”

This is in a “wealthy” area of my city as well so it was definitely a first.”

“Only worked drive-through for a year but the weirdest thing I saw was an alpaca in a minivan.

They asked at the window if they could order some apple slices for the alpaca. I just gave them two packs on the house.”

“Had a guy consistently come through the drive thru with his p*nis out and showing the young girls running the windows.

He would always order the same thing, large Mellow Yellow no ice, always on a Sunday, and always wearing military fatigues. Then he stopped showing up for a bit, we called him Private Peters, as our little sign to call the cops if he showed up again.

A month later we get an order for a large mellow yellow no ice, so I decide to take over the window because had a 16 year old running cash and sure enough he hands me his money with his d*ck in his other hand.

We convinced the car in front of him to stay in the lane and we called the cops, he got suspicious and left but they caught him and was charged.”

“A car pulls up, and all 4 people are just completely naked, just casually chilling.”

“I used to see someone come through with a lifelike mannequin in their passenger seat.

I asked about it and turns out they did it to use the commuter lanes on the highway.

You must have more than 1 person in the car or cop a fine.”

“Either the guy sitting with a dog in his passenger seat and a coyote and a deer chilling in the back, or the woman wearing just a bra…but that one is more traumatizing.”

“There was this woman that would come through and get a hot chocolate every day. Her name was Mary.

Mary was an older gal in her 70’s, drove an early 90’s Lincoln, usually had some old tunes playing, and weighed 60lbs, if that.

She was always so happy and so nice. I always gave her drinks for free because it was always such a treat to see her and she was just so nice.

One other feature I remember is she always rocked suspenders and a random colored fedora every day. I think she reminded me of Ms. Frizzle after she retires.

One day, she comes through and orders her usual. I said, “Mary, why are you always in such a good mood? What’s your secret?”

She smiles and waves me closer. I lean out of the drive thru window and she says, “Really, really good drugs.” She winks at me, turns her radio up, and cruises out of the parking lot. Mary is my hero.”

“The driver had a comically large d*ldo in the passenger seat.

He’d buckled it in and put a hat on it.”

“Had a d**nk guy come through drive thru. A cop car was in line right behind him.

Told the cops about the d**nk guy (he was blitzed and was going to kill someone). Cops said they knew as they were planning on pulling him over before he turned in and went to the drive thru. They decided they were hungry and decided to get food too before pulling him over.

They stayed at the back window and had us give them their food first so they could follow him out. Pulled him over in the parking lot. Was kind of entertaining.”

“Does a naked man with bags from Burger King and Taco Bell already count as a “thing”?”

“There was this really cute blonde girl that would always come through the drive thru naked on Saturday nights. Every now and then she would have another friend with her.

We always knew when it was her by the constant giggles coming from her car as she ordered. We always had weird customers, being it was the worlds largest McDonald’s located in Orlando Florida.

An order for 88 big macs or 120 cheeseburgers was not out of the ordinary though.”

“This dude pulled up and his girlfriend or whatever was almost entirely naked on the seat next to him, sleeping.

When he pulled up, he saw my shocked expression, pulled her thin jacket (the only thing on her body besides the seatbelt) to cover her n*pple and asked for some ketchup.

He was shockingly casual.”

“This girl used to come through with like 3 dogs. I finally asked her, “do you have to feed these beasts?”

And she explained that she just walks and grooms them. Well, one day she came through the drive through with like 15 dogs and she screams through the intercom “MY BUSINESS FINALLY TOOK OFF” and got a bunch of chicken tacos for them.

Come to think of it…I think she may have been trying to flirt with me. “

When the car pulled up to the front window, they had a whole baby kangaroo in their lap.

I don’t know where they got that from or why, but the closest zoo was 2 hours away.”

“I worked at Domino’s and one lady used a hand crocheted blanket to keep her pizzas warm.

Kept the blanket in the front seat and draped it over the boxes. I crochet, so I know how much work went into that blanket…”

“It was either the 12 year old driving or the lady in a right hand drive car.

“I worked a drive through at Arby’s and a DEA agent came through in his squad car.

When he pulled up to the window and I handed him his food and he thanked me, turned around into the criminal holding area and screamed “SHUT UP BEFORE I BREAK YOUR NOSE!”

I was clearly mortified. Then he turned back to me and said “just kidding there’s nobody back there”, laughed, and drove off.”

Hey, those were wild!

In the comments, tell us your crazy tales from the drive-thru. Please and thank you!