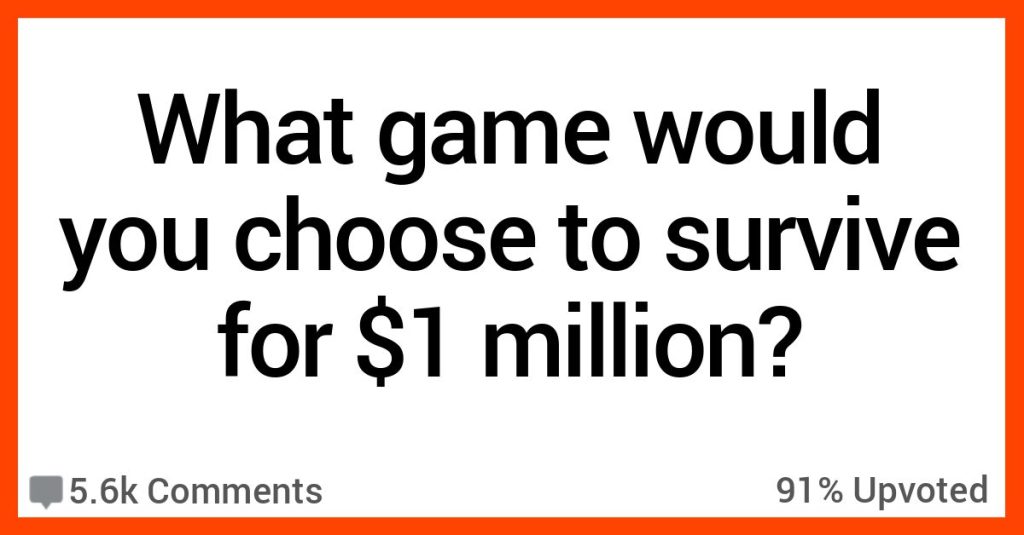 Let’s say you were offered a million dollars to live inside of a game for 24 hours…what game would you choose?

That’s the question that was posed to Reddit users and it turned out to be a really good one. Like most questions that involve “would you for a bunch of money” components, people are ready and willing – so let’s see what games they’re going to try to survive.

1. It can be unpredictable!

I’m going to try something here.

I choose “the quiet game” that my mom always wanted me to play on long car rides.

Dark Souls, I want to earn it.

I mean, you never actually die in dark souls, since you’re cursed.

Being stabbed through the stomach would still suck though.

Going to just chill in the Blue Recluse in Stormwind on World of Warcraft.

I got a sweet setup with plenty of fruit trees, drinkable water, a very nice home and tons of stuff to keep me occupied. I’ll be 100% fine.

Wii Resort unless I meet Matt.

Matt is the worst! Lucia in Table Tennis is also not to be underestimated.

7. You’ll be able to afford the surgery.

FIFA. I’m not as good since blowing out my knee, but I’m pretty confident in surviving.

Better hope the coach doesn’t keep you in for all 24 hours then.

No mans sky… I’m like 90% sure that I can live just on some random planet without dying for a day.

Although you start on a hell planet where you die in under 30s outside of a safe house or your busted ship. Enjoy lvl 10000 radiation and sentinels on high alert.

Yea. Can’t figure out what that lever does anyway.

At least until some idiot helper runs right over you on his way to plow the wrong field.

Fun fact: In the US, farmers die at a rate roughly twice as high as police officers and roughly the same rate as delivery drivers.

That game is dangerous. Flush toilet, dies. Go into alley, dies. Doesn’t use a condom, dies. Gets into cab with a bottle of booze, dies.

This is just the beginning of the game.

But also good luck getting me to leave Stardew Valley even for 1 million dollars.

DOOM Eternal. Either way, I can stop looking for a stupid job.

Doom Eternal was way more fun than any other Doom. I’ve played them all. But nothing was as scary as the beginning of Doom 3.

Well, I was high, alone, and playing in the dark with headphones you had to jack into the television lol

But will Nook let you leave before paying off your debts? Not sure how he handles people trying to skip out of town.

I’ve played games that have gone on for a couple days.

Any table top RPG. Spend the entire time RPing in a bar or something and avoiding all combat.

But hanging out in a bar might not be such a good idea if you’re an NPC. That’s the sort of place murder hobos visit.

The sims, it’s easy I just have to not get stuck behind any furniture, or burn the house down while cooking.

Unless I’m the sim, not the player. Then I’d have to pray I get a gentle or inattentive god.

Stardew valley! you can just spend the time getting involved in townie drama instead of doing anything dangerous and still have fun.

20. Just relax your way to the money.

Peaceful is easy as well, but creative just guarantees you’ll become a millionaire.

not moving or even installing the game gets you achievements so it counts as playing.

You’ve made it! Here’s your million dollars!!!

23. Start from the beginning.

If I start at the beginning, I just let Ralof handle Helgen, loot stuff, hit up the Guardian Stones (no hostiles on the way) and then swim to Riverwood to avoid the wolves. Sell stuff in Riverwood, rent a room and stay at the inn for the rest of the time.

Portal 2 because the first thing you do in the game is walk around for like 1 minute and fall asleep for a few years.

Football manager. In fact, I’ll do a week.

Them: You did it! You survived! Here’s your money

Me: Just one more match…

So probably a game where the player can’t actually die. A Pokemon game, probably.

Pokemon Snap (either one). Spend a day watching amazing wildlife, from a vehicle that is built to be completely safe, and maybe take some nice pictures.

These are some interesting answers. It’s pretty funny how different people have different logic, don’t you think?

What game would you choose? Tell us in the comments!