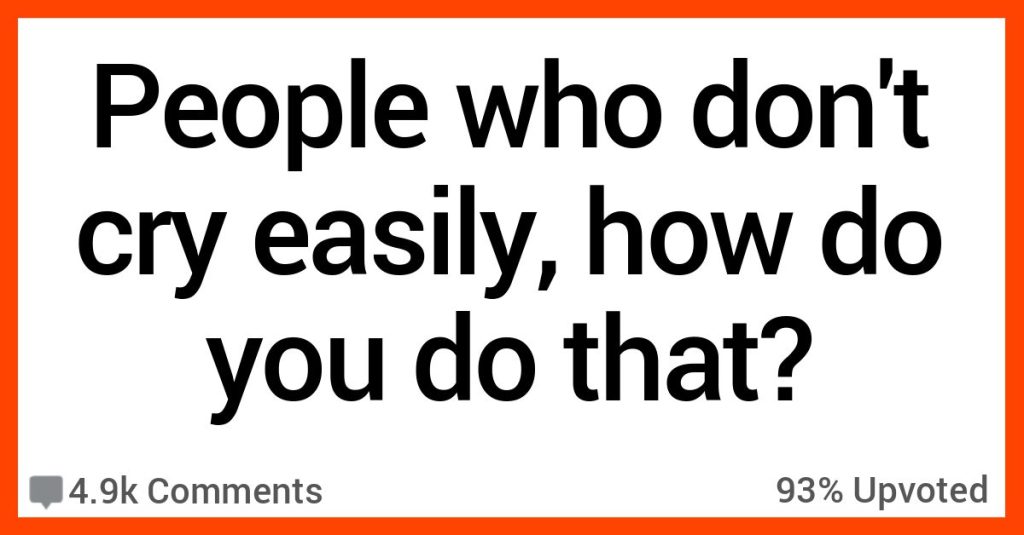 I believe that we’re all wired to either be super emotional or super buttoned-up. We can learn how to be a bit more in control or a bit more loosened up, but you are who you are, you know?

If you’re someone who cries easily, though, you might have good reason to want to be able to staunch the flow from time to time – like, say, at work – and if so, these emotional zombies are here to tell you how they manage it.

Tbh my emotions just don’t work as they should and i just don’t know how to show them.

Lots of past trauma.

Crying in front of others is a feature of weakness. That’s what my mind tells me and that’s how I feel about it.

I am now in therapy for getting more in touch with my feelings, to recognize them and how to respond to those feeling. It isn’t an easy road, but I am happy I’ve taken it.

Hormones play a massive part. The same thoughts can trigger floods of tears or a a slightly bummed feeling depending on the state of my hormones.

Also, knowing that you can control your emotions by framing your thoughts helps. For example: Picture a black limousine driving down a shady lane. You can imagine it as part of a funeral procession or a CEO being chauffeured to an important meeting.

You have the facts and your brain tells the story. You learn that you have control over that story.

I don’t want them to feel like they’re obligated to give me consolation because I’m crying. I’m in control of my emotions, which means I have good outlets to express what I’m feeling.

It really, really has to boil inside me for a long time, or be an extremely traumatic experience for me to cry.

I do feel the sadness but the physical reaction of crying just almost never happens, I just freeze up and feel horrible inside. It’s not nice because the feelings are always there, and the release of crying happens so rarely it’s excruciating.

7. They have feelings, just not tears.

Idk what it is, I feel just as bad as anyone as far as I know, it’s just tears aren’t as immediate of a reaction.

It won’t come out! I want it to but it won’t. The stuff that makes me cry is so odd sometimes.

My Husband met my BFF of 30 years (I’m 37 & our Dads are BFF) recently (both military) & the look on my BFF’s face made me cry so hard. He was so happy for me, he approved & accepted & liked my Husband in just a look. It’s burned into my memory. Broke my heart.

I had a small outpatient surgery yesterday- I got a bunch of heartfelt messages. Nothing.

My (at the time) 3 year old gave me a crusty animal cracker she dropped on the floor & said “good job” to me. I cried for like 20 minutes.

It makes no sense. Before anyone says it – I’ve been in therapy for years for other stuff but it’s been brought up.

I pack all of my emotions inside until I explode.

It was very unhealthy… my husband had to help me express emotions before that point came and it’s so much healthier.

I’m kind of envious of those who can cry easily.

I’ve tried reading emotional books, listening to music, that one scene from The Lion King (you know what I’m talking about) but very little happens, if anything happens at all. I feel the emotion for sure but as far as expressing it through crying?

It’s a different story. These days when I cry, if I cry, I keep note of what I was doing. I find it to be cathartic.

Emotional stability is, like most parts of your personality, roughly half genetic.

Meaning some people are just genetically predisposed to be unemotional, which is both a benefit and a curse. Its much harder to make them happy, but they’re also harder to make sad.

Whats interesting is that crying is your bodies way of getting rid of excessive chemicals (the things that make feelings) in your brain. Its why you feel somewhat better after a sad cry, or why the feeling is somewhat muted after a happy cry.

In short, blame your genes.

Growing up in a world where men were taught to be ruff tuff and ready for anything. Crying only got me a beating from the deadbeat stepdad. I’m in my late 30’s now and I can count on 1 hand the amount of times I’ve cried in the last decade, 1 of them was my son being born, another was alcohol induced after a family tragedy.

There are sooo many times I’ve wanted to cry, but this internal door just seems to slam shut and refuse to let me, as if somehow I’d become soft and useless if I cried. It’s a mental block I can’t even begin to understand let alone explain. Yay for toxic masculine upbringings.

As a wise vending machine once said, the light inside me is gone but I still work.

Some people may not ever cry. I didn’t cry till I had my daughter, now I can’t watch the end of Monsters Inc without tearing up…or end of Christmas Chronicles…or some sappy ass commercial…

Anyway, some people will cry easily through out their life a d they learn to deal with what makes them cry, they learn to get their cry out and move on.

Now that I know what makes me cry, I can choose to avoid those situations or just accept it.

I would reflect on what makes your cry and why you think you cry.

When life dumps enough s*%t on you for a long enough period of time, you really do run out of tears eventually.

Childhood trauma teaching me that its best to just not cry or to only cry behind a closed door and not tell anyone.

Yeah, growing up learning that nobody cares (at best) that you are sad, upset, or hurt makes it easier to not show outwardly.

18. A whole generation was born that way.

GenX. Apathy is both my strength and my curse.

I don’t know how to show my emotions and express the pain I feel. BARELY to my spouse, definitely not alone to friends. I only have two, maybe three friends who I would really want to share with.

I do open up about some things to my spouse. But never the worst of it. That stays in my head.

As a guy, it is because I don’t want to show vulnerability or weakness because I am crying. The outliers to this are family deaths.

Never frustration with life, never because I just feel sad.

21. Sometimes they DO cry but you don’t see it.

A friend of mine died. A few months later I went to a New Years party and his ex (from years ago) happen to be at the party too and at 1145 decided to bring up our friend that died. He cried a lot.

At 1205, I did a round at the party to make sure everyone saw me say happy New Years, went to my car and cried.

When I got my self together, I pressed my face against the cold window of the car so that my eyes wouldn’t look puffy and was back at the party by 1220 because I didn’t want anyone to know how upset I was about my friend’s death.

I find this interesting. Personally I don’t see myself as weak if I cry, however I am constantly compelled to be strong for others. When my grandmother died I was told by so many people to “be strong for your mother” and be a “rock” etc. So there is this constant pressure to emotionally numb yourself so that you can serve others.

It’s not necessarily toxic, sometimes it’s noble to put your emotions aside to help someone else with their grief or suffering. But there is a risk of creating an expectation in someone (especially young men) that they should never cry because it’s somehow selfish.

Eventually the person has internalised that idea, and now sees themselves as weak and selfish when they show emotion. The worst part is that you learn to be “strong for others” and one day realise you can’t turn it off.

23. Not the best parenting.

My dad would always get super mad when I had negative emotions for reasons he decided were unacceptable.

So I learned to hide them.

This. I haven’t cried in probably 16 years now and I think its thanks to discovering existentialism.

Nothing matters, so why cry about it?

Now someone like my spouse who is a frequent crier says something like that is easier said than done but like any other personality affectation, it has to be internalized and become part of your sense of self.

I just don’t find the need to cry.

I’ve cried like, twice in the last 10 years, and once was when my wife told me she wanted a separation. It was a pain in the a$$ because I couldn’t talk in the middle of an important conversation.

But yeah, it’s just not how I usually react? I’ve been asked before, and I never know how to answer. Everyone just assumes it’s just holding back tears in emotional situations because manly stuff, but that’s not the case.

I never feel like I’m about to cry, which actually makes it more difficult to hold it back when I do. Lol.

26. Their emotions are just not that deep.

I do laugh & cry but there just needs to be a threshold of emotion for it to activate the action from within.

Those times that I laugh like I did as a kid are so special to me. I was watching something recently. A Let’s Play sort of comedy channel. I don’t play many video games as an adult, but it reminds me of when you were 10 playing games with your friend.

Something absolutely absurd happened in the game and it just made my tear up laughing for so long. I get like one of those every two or three years tops. So it means a lot to me

27. It can be frustrating on their side, too.

It’s frustrating because, like you say, people say tell me it’s ok to cry, it’s good to show human emotion, etc. but that simply doesn’t seem to be a reaction that my body has available….. (well VERY rarely).

It has the tradeoff of not feeling happy easily either, it’s to do with being emotionally dampened (is what I call it).

To me, crying means being overwhelmed by the emotion of a situation. It happens from time to time, life is like that, but I’m not easily overwhelmed. There is stuff that’s worth crying about, but most of the other stuff is handled fine with more measured emotional responses.

It’s not so much about being in control of the emotions as it is that they don’t really hit the overflow point which is where tears are. I’m sure there’s some emotional dampening and all that jazz, but for the most part it’s just not my reaction to situations.

Take it or leave it, people, but most of the time crying isn’t all that bad.

How do you stop yourself from losing it when you really want to? Let us know in the comments!