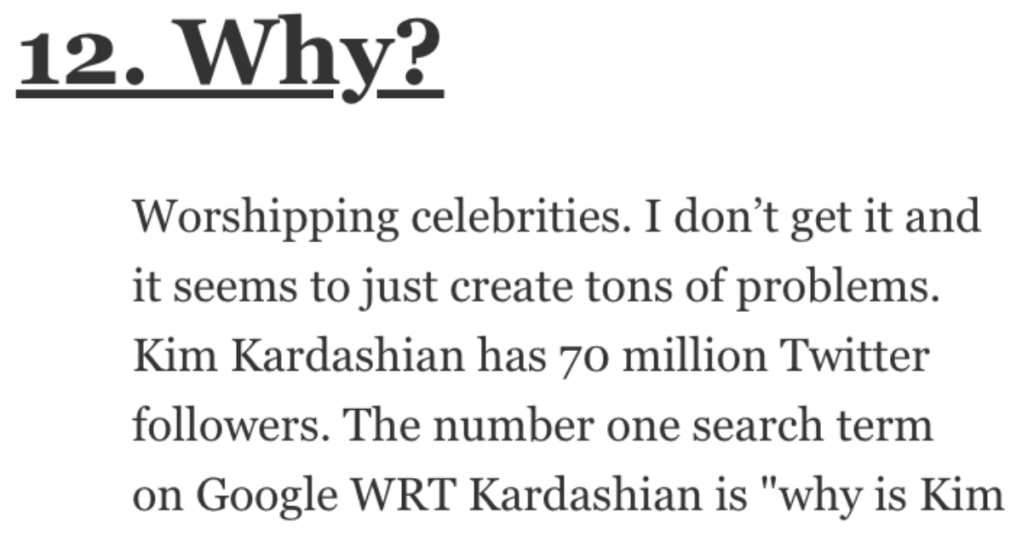 Social customs are nice because they can be a roadmap to how to behave among other human beings.

That being said, sometimes those customs arose in the distant past and don’t really do anything helpful in the modern world.

I bet you can think of a few, and so can Reddit – here are some customs people really think we should stop doing like, right now.

When people say. Your too young to be hurting. Eff you my back hurts.

My chronic illness would disagree but ok

2. You can choose your family.

That because someone is”family”, you should force yourself to spend time with them and be “nice and respectful”, no matter what kind of person they are or how they treat you.

This goes along with the enabling acceptance of “that’s just how they are” rather than condemning poor behavior choices.

Rest being seen as lazy. If I take a day off of work simply to sleep in and rest at home instead of having to have some sort of big plans or destination it shouldn’t be seen as anything less.

Rn I am at home, having taken the day off because I didn’t sleep well and have been napping, couch potatoing with my doggie and doing nothing. It’s great but I feel SO guilty. Why? There’s no good reason, really, other than ingrained ideas.

4. Cremation for the win.

Yeah dude exactly, I don’t know about you guys but I’m getting my ashes spread somewhere badass and calling it a day, sure cremation ain’t cheap either but MUCH better than a stupid casket and funeral service

Having to purchase gifts for extended family that you cannot afford because it is Christmas or another holiday.

Giving Greeting cards for every single event imaginable. Why pay $5 to give someone a piece of paper that will get thrown out the next day?

I’d rather you give me $5 and skip the card.

Though it looks like this custom is fading away during the pandemic…but how about we stop glorifying us “being model employees by showing up to work even while sick?”

I was at a retailer for 14 years, and I don’t have enough fingers and toes to count how many times I used to see managers and supervisors dragging themselves to work while sick to please their superiors. In January 2020, I ended up getting the flu from a co worker that decided it would impress the store manager if she still showed up while sick with the flu.

That culture went away REAL quick when we started getting COVID cases in the store I was at…and I too ended up getting a mild case of COVID. I’ve called out any time in the past when I felt sick…and I will continue to do so as I normally did.

8. We need to band together.

Discussing salary with co-workers should no longer be taboo.

They don’t want the workers to realize how screwed they are. If the workforce is free to discuss what they’re being paid, the next thing they might decide collectively is that they want to be paid more.

I don’t get it and it seems to just create tons of problems.

The number one search term on Google WRT Kardashian is “why is Kim Kardashian famous?” Why indeed…

10. Hard to believe how different it is other places.

Putting the onus on the customer to tip the Service staff, especially in the US.

Stop overworking the Service staff, pay them a living wage, and if a customer does want to go above and beyond to reward someone for their outstanding service, they can do so, but are not obligated.

That not having Facebook, Instagram, or other social media profiles is “different” or isolationist in some way.

To add to that apparently not posting on facebook is seen as something weird.

I just use it to get in contact with people that for some reason refuse to use emails through messenger.

In Denmark we have this tradition of throwing ground cinnamon and pepper at people who turn 25 and 30, respectively, if they are not yet married.

Except people often overdo it, strapping the victim to a street light and use an entire kilogramme or more.

It’s harsh, stupid and wasteful. It really needs to stop.

Or when the couples parents say things like “oh you just HAVE to invite your distant great aunt Vicky and all her children to your wedding!”

“The customer is always right” being used as an excuse to be a f**king a$$hole.

The full phrase is “the customer is always right in matters of taste”.

It’s meant to mean that if someone wants to buy a product, you sell them it, who are you to judge if they are willing to pay for a tartan painted car?

I don’t know why my coworkers are boasting that they slept 4 hours last night.

Being nice to customers that act horribly.

I’ve apologized in advance to a few customer service reps to let them know that I understand this isn’t their fault and any frustration they are hearing is aimed at the situation/larger company and not them in particular.

And shockingly I get great customer service. Treating people like fellow human beings shouldn’t be the exception, it should be the rule.

Skirts are ok in a workplace, but shorts are not.

19. Seriously no one cares.

Perfect attendance in school, or being penalized for missing classes due to sickness. This creates perfect little diseases spreaders and future workaholics.

This is also setting up a kids life to be like what others mentioned in this thread this far. (Coming into work sick, believing their work life is more important than home life etc.)

Stop questioning when we are having children. It’s none of anyone’s business.

I hate this question. My sister can’t have kids but I know she wants to. She has had multiple miscarriages recently. I hope she never gets asked this question.

Treating someone with extra deference or respect because of their social station or occupation. Just because someone is a politician, judge, a cop or owns a business shouldn’t mean anything as far as social interactions go.

As far as I’m concerned everyone I meet gets a base level of respect, and they can earn or lose it by the way they behave.

Having all the fun prints and decor and what not only for kids/babies/ nurseries. I want a dinosaur on my pillowcase saying ‘rawrrr’ over some daisies every time.

Cashiers and other jobs not being allowed to sit down because it makes them “look lazy”.

While I’ve got the spotlight can we do away with “minimum wage shouldn’t be enough to live off of” too? Thanks for coming to my TED talk.

Celebrities being treated like God’s and people caring about what they name their babies rather than what’s being taught to their kids or what’s going on in our government.

People care more about the lives of strangers (celebs, influencers or any famous persona) than their own lives and the people within. It’s baffling and tragic.

25. There’s no real argument to the contrary.

I think we would all be so much happier with a 4 day work week and 3 day weekend.

A 4 day work week but having Wednesday off is where it’s at. I had that schedule in college and having a day off in the middle of the week to rest and/or catch up on stuff is great

Just dump me somewhere into the forest, animals might eat it, I don’t care.

That somehow the concept of maturing means you have to give up hobbies that are seen as “childish”.

I’ve taken roller-skating lessons with a class of 5-year olds and I don’t have kids. All the parents thought it was strange, but I felt it was the best way to learn rather than risking falling on the kids at the rink. Plus, since the kids were ahead of me on skills, the teacher had them show what they knew by having them teach me. The kids loved it.

Many of the parents were bothered by me joining the class, when it was specifically an all ages class. I just didn’t realize that I would be the only person not that young. I found out most of the parents couldn’t skate themselves. Seems to me it would have been good for them to be out there learning as well rather than just watching. Or, if they wanted their own class, enough adults could have requested a separate class.

I hope all the kids kept skating.

It’s 21st century, and about 200 million “untouchable” people in India cannot have a normal life, normal career, they cannot even have justice in case a crime is committed against them.

LEGO is not just for kids!

For real, I didn’t even dare to ask for +$100 sets as a kid. Buying them now makes me feel like the richest man on earth.

Walking out of the Lego Store when they had to tape bags together because there was nothing big enough to hold the set, yeah, that’s a great feeling.

Yep, all of these, and also please stop shaking my hand.

What do you think is missing from this list? Add it in the comments!