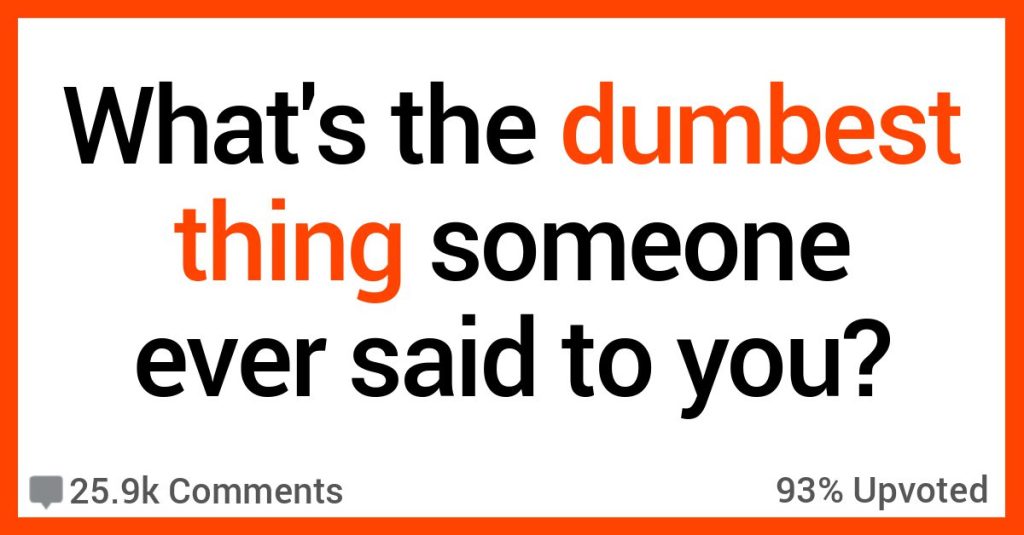 29 People Share the Dumbest Things Someone Ever Said to Them

I’ve said it before and I’ll say it again…people never cease to amaze me.

Just when I think that I’ve met the stupidest person of all time…BOOM…alone comes another one.

I think you know what I’m talking about, right?

Are you ready to get dumb? Let’s do it with folks from AskReddit!

“A friend said that the Super Bowl has been around longer than the United States because there have been 54 Super Bowls and only 45 Presidents.”

“Believe it or not, I worked with a guy who told me you cannot take a photo of a rainbow. No really, he was dead serious.

Now this was way back in the day when the only computers were the kind that filled an entire room, had to have noisy (I wore earplugs and it saved my hearing!) air conditioning on a raised floor, and ran just one job at a time.

Because PCs and PDAs had not been invented yet, I had to wait until the next day to bring in my photographs of rainbows, to which he said that they must have been drawn in like a painting…”HELLO VILLAGE…we found your IDIOT!””

“My second child was a planned cesarean. Then doctor who performed the surgery also tied my tubes at that time, as we didn’t want any more children.

I saw him frequently during the pregnancy. I went in for my 6 week checkup and he asked what I was doing for birth control. I said nothing. He then lectured me on not getting pregnant again too soon.

I reminded him of my surgery. I actually started laughing.”

“Mormons have babies because all of the spirit children are trapped in a cloud, so they have a bunch of kids to save them.”

“In 4th grade, I remember someone asking me, “What’s Obama’s last name?”

I replied with “Leslie”.”

“I am a woman working in I.T. so I have a million of them.

One that stands out was the woman who called in a rage because her new pc wasn’t working. When I tried to help she told me she would rather “talk to one of the men.” She refused to co-operate with me when I asked her questions and was incredibly rude to me.

Turns out that her monitor was turned off. Normally I wouldn’t bill for something like that, but her attitude cost her a half hour labour charge.”

“My friend started dating with a 40-something, divorced man. He said with all seriousness that women don’t f*rt because they don’t have bowels.

He lived with a woman for years, they had a daughter together… My friend was anything but shy so she promptly illustrated the fact that we do indeed have digestive systems…

Same friend worked as a waitress and one of her colleagues were working on a crossword puzzle. My friend looked at her puzzle and said that the three letter “mammal living in water” is likely not “HAL” (fish in Hungarian) but “CET” (whale in Hungarian). The girl looked at her, thought for a second then came back with “well maybe, but HAL fits into 3 squares!”.

Another colleague of her was feeling very poorly one day, she kept throwing up. They had the following discussion:
– Don’t you think you might be pregnant?
– Naaah, that’s impossible!
– Oh, I thought you had a live in boyfriend.
– Yeah.
– And you have two kids so you certainly are not barren, right?
– Yeah.
– Did you have your tubes tied or he had a vasectomy?
– No.
– So you two like… don’t have s*x?
– Yeah, we do, all the time.
– And do you use protection?
– No, he doesn’t like that.
– So then how is it impossible?!”

“I was at McDonald’s a couple of years ago inside with my mom. She let me order, and I asked for a happy meal and listed everything I wanted in that meal and then I said “Oh! And can I please have the dragon toy?”

Because, beyond my wildest dreams, McDonald’s finally had a plastic dragon. But the employee said “Don’t you want the girl prize?” and held up some weird fruit scented doll.

FIRST off, please don’t assume gender (even though I am female), and second, ENOUGH WITH THE GENDER SORTING, I LIKE DRAGONS AND NOT DOLLS, OKAY!?!?”

“When discussing human evolution I said that all modern humans descended from Africans. A Croat chipped in and said ‘except Croatians, we are autochthons’.

I asked him to explain and he said that Croatians independently appeared in Croatia, without evolving from monkeys or descending from Africans.

I literally did not known where to begin, such was the historical and anthropological disconnect. I can only surmise that there is a strange sect of fact-free nationalism to which he subscribed.”

“My ex sister-in-law thought Canada was in France, because they speak French….

“Somebody once told me, if a person knows how to say “hello” “my name is” “good morning” in a language, they are fluent and can now speak to natives.

“1. Men are superior to women

2. That LGBTQ+ people are going to burn in hell (I’m a lesbian)

3. That atheists are going to burn in hell (I’m an atheist)

4. And a bunch of other racist/s*xist/h*mophobic BS.”

“A little hard to explain.

They thought “Indian” was a general term for any pre-colonial American and questioned why there was a country in Asia called India.”

“During a biology presentation,(anonymous) keeps saying orgasms instead of organisms.

We all had a good laugh.”

Something tells me those parents are REALLY messed up.

Btw, my friend was a girl and found out when the boy asked her what she did to have hers “cut off”.”

“Watching Avengers Endgame in a theater.

Someone in a seat in the front yelled ¨TONY STARK DIES AND THANOS GETS SNAPPED AWAEEEEEEEE!¨

“One classmate said to me that if my palm is bigger than my face, I have AIDS and HIV.”

“When I was in college, a Christian trying to convert me said,” You know, Satan put fossils on Earth to test your faith.”

I just looked at her and just laughed.

Another gem was in high school when a friends sister, who was 16 at the time, I was 17 said to me “did you know rabbits don’t lay eggs?””

“We were at Olive Garden when my sister asked all of us if french fries were Italian.

“Was asked the other day- “Are you still grieving?”

Why would you even ask that question?”

“My dad once told me that if lesbians just “kept an open mind” they would find they really like [men] too.

It was directed at me because he assumed I’m a lesbian without confronting me.”

“Some girl said in my f***ing HISTORY class (keep in mid we are SENIORS!!!!) that black people originated from white people painting their faces to be a darker shade!!!

I’ve never been more disappointed in the human race.”

“My 12 year old sister said that alligators are in Miami.

And my 18 Years old sister said “Yeah or Florida”.

“My sister is adamant that not only the Holocaust didn’t happen, but also that 9/11 was an inside job, the Moon Landing was filmed on a Vegas film set, and that vaccines cause health problems such as autism.

Talk about a moron.”

“Once a friend of mine told me that my dog cant be a dog because she doesn’t chase cats.”

“Ok. To set the picture. I am working for a Big Box Retailer.

I am not only wearing the approved pants and shirt, I am also wearing a vest, a name badge, and I am taking boxes from a cart, opening them and placing rhe products on the shelf.

“A guy yelled at me, because he disagreed when I said that scientists had figured out a way to remove salt from salt water.

I just glared at him. I don’t argue with fools.”

In the comments, tell us about the stupidest thing someone has ever said to you. Thanks!