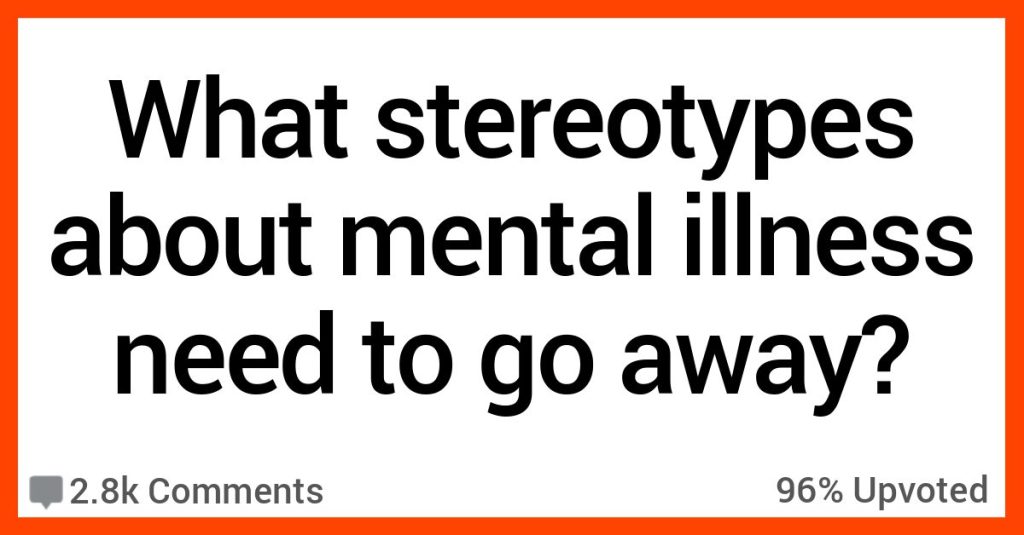 Stereotypes are almost never helpful, and when it comes to the mental health of thousands of people, there’s really no good reason to keep them around.

We’re doing better with destigmatizing mental illness and mental health treatment, but as these stereotypes illustrate, we still have an awful long way to go.

OCD is not about being tidy and clean. It involves rescuing, intrusive thoughts and obsessively cleaning is just one of OCD related compilations. It can seriously f*ck up someone’s life.

An example would be turning a light switch on and off 30 times once entering a room or you fear something terrible will happen if you don’t.

It really annoys me when someone calls themselves OCD because they like a clean kitchen.

If you get angry and go off on someone they ask, “are you off your meds?”

That depression only makes you sad. There is a myriad of other feelings, and physical symptoms.

4. Most people are just average.

Mental illness does not make you particularly dangerous or a genius.

5. And it gets worse with stress.

Not everyone with Tourette syndrome randomly yells out obscenities.

7. It can happen to anyone.

Most people with PTSD and/or CPTSD haven’t been in the military or a war zone.

People with anxiety being highly strung, or nervous about things.

It can manifest itself in that way, but it’s more like there’s always something at the back of your mind that needs doing, but you’re not sure what. Even if you know what that thing is, you can see the end goal, and maybe even the steps to getting to that goal, but staying on that path requires you to fight with self doubt, and the “what ifs” that plague your mind when you’re on the way there.

Also, you can appear quite well adjusted in social situations, but in downtime, overthink every f**king thing.

9. OCD takes over your life.

It’s not liking your pens in color coordinated order- it’s feeling like if this ‘contaminated’ pen touches that one, your sister will d**.

If you don’t hit the light switch an odd/even number of times, you’ll d**.

The rituals can literally take over your life, and you know they don’t make sense, but you can’t stop.

Depression isn’t being sad all the time and crying a lot.

Parts of it can be but it’s different for everyone.

11. It’s much more complicated than that.

That eating disorders are a vanity thing.

And that eating a banana is going to heal you.

I’m an average weight, adult man and it drives me crazy how hard it is to find support in the professional world because I’m “not thin enough”

The sheer exhaustion and feeling of weight. On particularly bad days it’s like I’m wearing a 50lb weight on each limb and a 100lb vest.

People love to say “Exercise and nature will cure your depression!” but it got to the point where I had to stop going to the gym because I was routinely leaving in tears halfway through my workout because I just could not physically or mentally do it anymore.

I have days where I can scarcely physically get out of bed. And all those things that are supposed to give you good endorphins – exercise, fresh air, sunlight, food, even s**… They leave me even more exhausted and miserable.

I have gender dysphoria and as a teen I starved myself to look more like a boy and so that my menstrual cycle would stop (amenorrhea caused by weight loss.) I also felt dirty and being thin made me feel clean and empty.

I h**ed myself and wanted to not exist. I literally wanted to starve myself into nonexistence. Vanity didn’t enter into it.

Schizophrenics don’t always hear voices. With mine, I hear people trying to break down my door, trying to open my windows, and movement under my house.

Schizophrenia often involves extreme paranoia rather than evil voices; my Bio Psych professor told us how her BIL, if off of his medication, believed that if he left the house for any reason someone would break in after he left to unplug the fridge and spoil all the food.

Mood/anxiety disorders do not need an objective reason for occurring – you don’t need to have a s**t life to be depressed or to be in at any actual risk of something bad happening in order to have anxiety. They can just happen randomly or in connection to things that happened far in the past.

Therefore, the common notions that someone is ungrateful for being depressed or having anxiety or that they’re faking it because they “have no reason” to suffer from them is absolutely flawed and the attempt at “fixing” them by pointing out the good things in somebody’s life is futile and antagonizing.

17. Once Hollywood gets ahold of something…

The representation of Dissociative Identity Disorder and understanding of it is awful.

People with it are often called someone with split or multiple personalities, which is outdated terminology.

DID forms due to trauma, almost (if not) always as a very very young child. Their alters are meant to protect them or help them function, so having dramatic ‘switching’ between alters would defeat the protective purpose. It would also be extremely unhelpful for them to have “psychotic” or “evil” alters, and not saying that one can not have an antagonistic alter, but portraying this as always the case in media is extremely unhelpful and harmful.

Typically people with DID don’t know about their alters unless they start to suspect something odd because of amnesia, loss of time, finding things they didnt buy or put there, etc. sometimes another person will point it out that they act different sometimes. This goes for their alters too, alters don’t always know about their fellow systemmates existence. Therapy helps in making a system more aware of eachother and function.

Obviously there are some cases where alters do know eachother and are aware of eachother, but not always. OSDD-1b actually lacks the amnesia portion of DID, but still has the alters. OSDD-1a is where amnesia exists but alters are blurred together or seemingly non existent, thats how id describe it at the very least.

People calling other people bipolar for being a little moody.

Or referring to themselves as bipolar for this. “Omg I was crying a minute ago and now I’m laughing, haha I’m so bipolar.”

No, you don’t know what the f*ck you’re talking about.

1) Having a good day and hearing “I thought you were depressed”.

2) How debilitating anxiety can actually be. It’s not just feeling uneasy about being social. Sometimes, when I’m going to a place I’ve never been, or seeing someone for the first time in a while/first time ever, or I’ve got a significant event like first day back in education, I get an overwhelming urge to throw up. There were a few months in high school where my regular morning routine was: wake up, eat breakfast, put my hand on the front door, run to the bathroom and throw up my breakfast, walk out my front door. I might not have thrown up if I’d just walked out and gone to school, but I was so terrified of rolling those dice and getting a bad result that I’d just mentally push that strong, nauseating urge over the edge to get it out of the way.

3) Autism doesn’t mean I have dulled or no emotions; my emotions are quite strong, and I’ve had to learn to limit how much of them I express at once for the sake of those around me.

Anxiety isn’t just panic attacks and being afraid of everything to the point of not leaving the house.
It seems like anxiety isn’t taken seriously unless someone is hyperventilating and sobbing and shaking.
Anxiety is your body being in flight or fight mode all the time, for no damn reason, even when your mind is telling you rational things your body is like LET’S GO, WE GOTTA GO NOW.

I have GAD and never feel at ease or safe, and a lot of things are really hard for me, but I make myself go do things and enjoy life, even when my body is screaming the opposite. It’s exhausting. But because I seem outgoing and calm, no one ever believes me when I talk about my anxiety.

Being autistic doesn’t mean that we are stupid or of low intelligence, it just means we see the world differently.

No, we will not see a kid that hung himself in the bathroom and think it’s a piñata, no we don’t exclusively scream into our mic when we play video games, no we are not obsessively clean, no we don’t lack sympathy – though empathy can sometimes be tough for us – no we don’t all need someone to watch and bathe and feed us.

Every time I see an “autistic meme,” it makes my blood boil. And media representation is even worse. The only thing it’s doing is setting false expectations for what an autistic person will be like.

We are not all geniuses, we just sometimes latch onto certain subjects because we really, really like them. Sometimes it seems like the only thing in the world that makes sense.

Even that smell sense is inaccurate.

23. The only and nevers are usually wrong.

Only women have BPD.

That Autism is a condition exclusive to boys.

The truth is autistic women and girls are extremely under diagnosed because they learn to camouflage their symptoms early in life.

25. One of the hardest diseases out there.

Alzheimer’s is not just slowly and passively forgetting things.

There is a middle part where the brain realizes something is up and acts up on it’s own outside the poor sufferer’s control.

This manifests itself often as extreme anger, self harm, and other loss of control.

Girls with ADHD are often missed as well because they present as more daydreamy than hyper.

That everyone is a “little” bipolar. F**k off you were sad and happy in the same day.

Also that there’s nothing wrong with us we just need to get hobbies, drink water and exercise :))))))

That people with schizophrenia are all dangerous and violent.

In reality, people with mental illness, including schizophrenia, are far more likely to be victims of violent crime rather than perpetrators of it.

29. Not all sick people are monsters.

People think that borderline personality disorder makes people evil and there’s nothing to be done about it.

The actuality is there is an entire type of therapy designed for bpd that is really effective in managing symptoms.

Pretty much everything about ADHD.

No, we don’t need to just try harder

No, we’re not lazy

No, we don’t need (yuk) discipline

It’s not made up, there are different types of ADHD and our meds help us cope in an NT world. They’re not cheating.

Here’s an idea; how about we treat people and their health individually instead of as a collective?

I mean. It’s just a thought. What are yours?