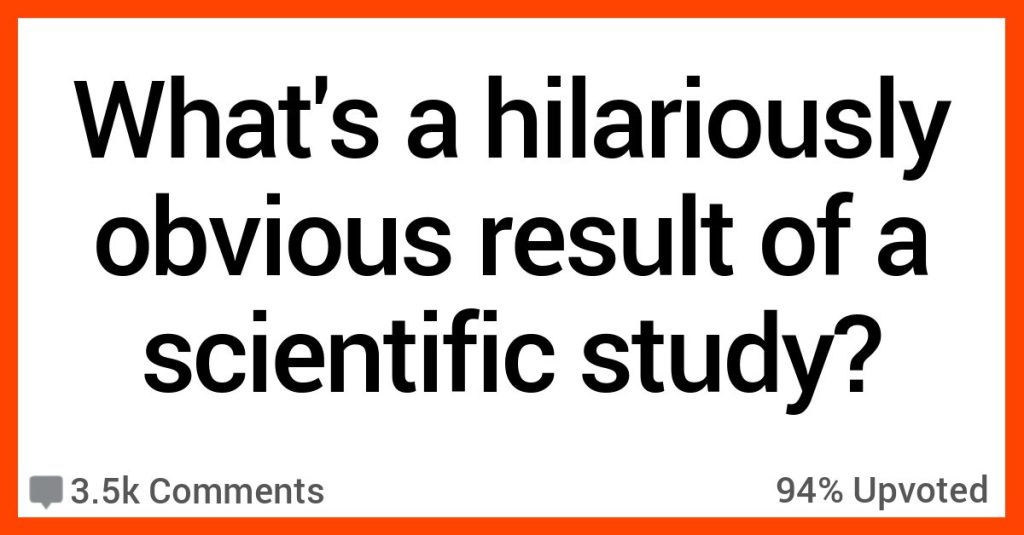 Tell me if this sounds familiar…

Have you ever seen a headline about a scientific study and said to yourself “what did they expect to find?”

I know sometimes the outcomes can seem obvious, but we can’t call them scientifically accurate unless we do the actual research, you know?

Well, if you’re looking for a laugh, these “well, duh!” research studies should definitely do the trick.

Not psychology, but I’ve published a “duh” paper. But it was conventional wisdom that previously had not been documented or even discussed in the literature. So I conducted the research and published.

Many people in their twenties consider the geographic locations of their partners and families of origin when making career decisions. Previous literature focused solely on job tasks, work environments, and pay. Literature on families impacting career choices focused on participants in their 30s and 40s, and primarily on the impacts of participants’ children.

It turns out siblings and grandparents matter to many people in their 20s.

The studies they do on universal basic income where they take like, 100 low-income people, give them a free chunk of cash every month for like, 6 months, and then declare the amazing conclusion that those people were happier, and none quit their jobs or stopped working.

3. For about a hundred reasons.

A gigantic progress in medicine appeared when a doctor found strange that richer urban women would d** more often during childbirth than poorer rural women. It lead to the discovery of the concept of hygiene.

Edit: In that case, he correctly deduced that the doctors were bringing something bad to the young mothers and made them clean themselves. I should have added that.

The considerations on water quality and sewage are also correct. Urban health really improved once chlorine was added in distribution water, sewage systems were created and garbage was collected.

4. The word is right there!

I wish I still had a link… It turns out that the most effective solution to the cycle of disinvestment in urban neighborhoods is- wait for it- investment.

5. Anyone who has had a cat knows that.

That cats do understand us to a point, they just don’t bother reacting. I could’ve told you that for free.

My favourite is that cats know their names but that they just don’t care! I have one that comes when called and does several “tricks”, the others are just apathetic to anything that we do.

6. There’s an evolutionary reason for that I think.

Study shows that humans are more empathetic towards puppies and babies than full size dogs and 30 year old men.

I think a lot of it is people raise dogs and cats differently. I know so many people that treat their cats as just a fluffy thing to pet and feed. Their dog however, they take on walks, play fetch with it, talk to it, call it by name since the day they got it, etc. It doesn’t surprise me when they say their cat does nothing when they call them.

I grew up with both cats and dogs, so when my wife and I got our cats we raised them like you would a dog. We spent time with them, played with them for hours, called them by their names, practiced their names. Practiced simple commands with treats. People are shocked when they come over that our cats are so sociable. Like yeah dude, cause I do stuff with them.

Microsoft in Japan tested a 4-day work week for 5 weeks.

Productivity jumped 40%. They subsidized up to $920 for family vacations. Employees took 25% less time off even though work days had only reduced 20%. Electricity consumption went down 23% at the office. 59% less paper was used.

And wait wait, get this guys, you’ll never believe it:

92% said they liked the shorter week.

So productivity increased, consumptions decreased, the work got done, your staff are happier and take less time off, your profits in theory increased as your bills decreased…

Hmmm, wonder if it’ll catch on…

That bis**ual men exist. I, as a bis**ual man, was shocked to say the least.

A lot of those studies have conclusions like, “Turns out, we are all attracted to the same s** to a certain degree!”

I suppose, but you would have to get straight men to admit that they know when other men are attractive first.

I once did a physics class-lab in high school. They had us measure the temperature of hot water in a jar across time.

Surprise surprise, the conclusion is that hot water cools down if you leave it out.

I had to get up at 5am for that class.

I’m a psychology student and many if the studies I read about have that quality.

“People are attracted to attractive people”,

“Too much emphasis on statistical significance testing”,

A team of French researchers did a study to see if dogs felt the emotion Love.

All they are is fuzzy balls of love.

I think it was just a scam so they could get paid to play with dogs for a few months.

There are thousands and thousands of studies that conclude “too much sugar is bad for you.”

I get at least one new one every week on my google news feed.

Yes. That is true.

People get more confused if you use longer words when you don’t need to.

Picking one’s nose is a common trait of adolescent humans.

The study calls it Rhinotillexomania to make it look like they weren’t just asking if kids were picking their noses.

17. Walking with it at all, I would also guess.

Study shows walking backwards with a cup of coffee makes you more likely to spill it.

Of course, walking backwards may be less of a practical method to prevent coffee spilling than a mere physical speculation. A few trials will soon reveal that walking backwards, much more than suppressing resonance, drastically increases the chances of tripping on a stone or crashing into a passing by colleague who may also be walking backwards (this would most definitely lead to spillage).

I just can’t stop laughing at the idea of two people walking backwards to try to not spill coffee walking into each other, it’s like a Monty Python sketch. And now its John Cleese and Terry Gilliam in my head both over apologising to each other. Oh! even better, they can be snooty waiters carrying coffees in a restaurant!

In the US, the majority injuries due to fireworks happen in July.

A study of high school students found that those who had s^x were more likely to get pregnant.

My roommate and i took completely different paths to the same college every morning and evening. He would always tell me his way was faster. He walked 10 mins to the underground, switched twice, then took a bus to the campus. While I took a bus that left from a minute in front of our house and dropped off down the street from campus

He was adamant that his way was way faster. Finally one day we decided to test it, and left at the exact same time. He got to campus an entire minute ahead of me.

It was a “well sh%t” moment for him because for 5 months he had been putting in all the effort to save a minute of his day while I sat on the bus and read and study the entire way most days and didn’t move. He started taking my way after that.

In high school we each had to write and present a research paper on a unique topic, and my friend wrote about sleep deprivation

It was a very well crafted paper with credible sources, but he got some light ridicule for his conclusion: “Sleep is the best cure for sleep deprivation”

I get where he’s coming from though. Currently, there is no real substitute for a good night’s sleep. If you need 8 hours of sleep, you can’t regularly get only 5 hours and power through the day with caffeine. It’s not sustainable and you’ll feel the detrimental effects soon enough

Electric shock therapy administered to the face is not an effective form of treatment for rattlesnake bites.

A guy I know witnessed a bar bet where a couple of guys were daring each other to kiss a rattlesnake that they found outside. Of course, one of the drunk idiots got bit right on the upper lip. And the rest of the guys at the bar have heard that electric shock can neutralize the venom, so here is what they do. I have no explanation for how the hell they thought this was a good idea, other than that a lot of alcohol was involved.

They drag the guy to someone’s truck and hook jumper cables up to his face.

He was admitted to the hospital with third-degree burns, but he lived to tell the tale.

I’m not sure if it was a ‘legit’ study, partially because I can’t find it anymore. But I remember a study that showed that married couples divorce more often!

“You think marijuana does no harm — that’s pretty much the consensus today,” said Georgia State University economist Alberto Chong in an interview with The Academic Times. “But there are unintended consequences, and one of them is the fact that you really get very hungry and you start eating c**p.”

Most car accidents are cause by the vehicle not being able to stop in time.

In a similar vein, “most car accidents happen within 5 miles of the home”.

Like no s**t, that’s the only place I’m guaranteed to go through every time I go somewhere and when I go back.

And while we’re at it.

“Most accidents happen in the home”

Yes the place I spend most of my time is probably where I’m most likely to have an accident, that makes sense.

27. Could someone inform my husband.

Conclusion: “The unwrapping sound could be decreased with different wrapping materials that hold their form better or don’t produce so much sound when unraveled.”

Science builds on other science. A breakthrough paper needs to reference other papers to make a foundation for its own findings. Often as a single, nearly throw-away sentence with a footnote to that study.

Therefore, there is a ton of ‘water is wet’ science out there. To that end, in my field (dentistry), the most obvious result study showed that the harder you pushed a cutting bur through a material, the more it cut.

29. They’re attracted to movement, so.

Most sharks attacks happen in shallow water close to a beach.

Makes sense as that’s where all the people are.