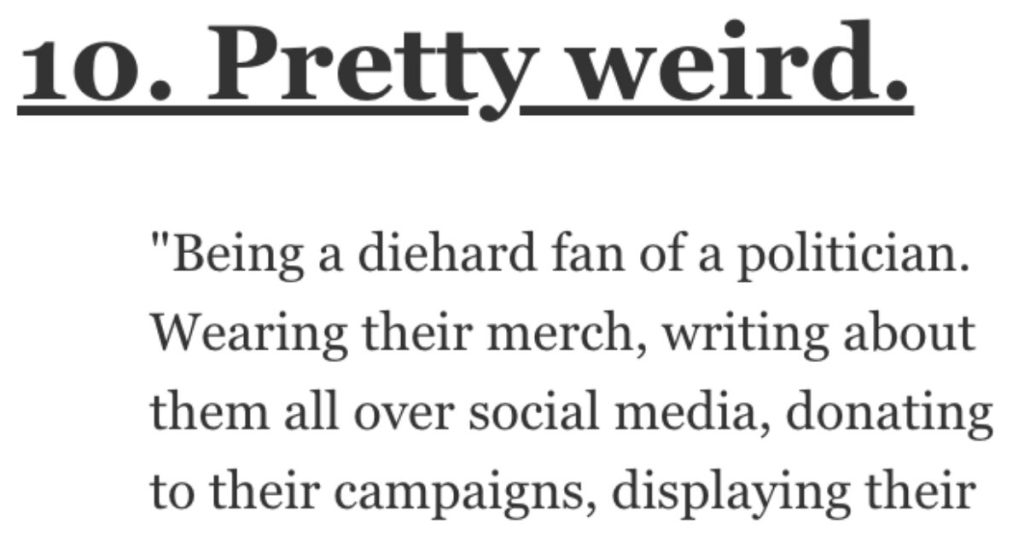 Maybe it’s just me getting old and grumpy, but whenever I turn on the radio or the TV, a lot of the really popular stuff on there just…confuses me.

But when I hear current, HUGELY POPULAR rap artists…I don’t get it.

I guess we all have those kinds of things, right?

People on AskReddit admitted what they just don’t understand the popularity of. Let’s take a look.

I’ve been to several drag shows and I’m always bored out of my mind. Are those costumes supposed to be s*xy for straight guys too? I always hear about women taking their straight husbands to shows and the husbands love it.

Yeah, not me. I don’t really enjoy the whole sassy stripper vibe they go for either – even if it was an actual woman doing it.

Everyone always looks at me like I’m a huge homophobe when I talk about this so I’ve learned to keep my mouth shut. It’s very frustrating because I love and support the LGBT+ community.

It’s not that I HATE drag shows I just find them boring. Though admittedly they also cause me some anxiety because I know I’ll have no idea what to do if I get singled out by the queen for a bit.

Also RuPaul’s Drag race is like the definition of a show I am not interested in. Not only because it’s drag queens but reality competition shows are so fake and boring.

My sister used to dominate the tv watching Next Top Model every weekend and I was bored to tears by that too.”

Seriously, the guy is a womanizer and a creep, also has severe mental issues, but people treat him like a god and don’t want to tell him no.”

5. Definitely not for everyone.

I’ve watched alcohol addiction ruin the lives of 3 people in my family.

Even if you’re a fan you realize it’s not good?

You’re not singing about tractors, muddy trucks, skies, and the literal dirt on your boots thinking it’s anything but ridiculous twangy garbage.”

It’s basically destroying someones reputation because of something they said or did in the past, likely when they weren’t as aware of offensive they were being.

It’s like having a life long grudge against your cousin because they did something that pissed you off when they were a small child.

You wouldn’t hate your cousin after all this time because they’ve likely grown from it and matured, so why cant that apply to people with a high reputation?”

She’s a culmination of a lot of the growing trends of the decade. She blends the bedroom pop culture, the quiet and minimal sounds of of Lana Del Ray and Lorde, and this decade’s brand of dark and quirky.

She’s essentially what the decade was leading up too. Makes sense, though I’m not a fan.”

Why they and their fans act like they are the next big thing.”

“Being a diehard fan of a politician.

Wearing their merch, writing about them all over social media, donating to their campaigns, displaying their bumper stickers, lawn signs, flags from buildings and vehicles.

For a rich old f*ck that doesn’t care about you.”

“I have never understood the popularity of Star Wars.

I think the movie were fine movies but I don’t get why people treat them like the best movies of all time.”

“I was born and raised in the USA.

I would come Into work on a Monday morning and passively listen to two people debating yesterday’s big game, plays called, errors made, gains and losses so on, and I could never understand what drives people obsession with professional sports.”

“This is pretty unpopular but Marvel films.

I just don’t understand the love for them. This isn’t like other things I dislike either, for example, I don’t like star wars but I can understand why others do (lightsabers are cool).

Marvel films, I do not for the life of me understand why someone would like them and I’ve tried. They do nothing for me, the films are so boring and predictable.

I can honestly say that Captain America was the worst film I’ve ever seen, it was just so generic, I was bored to tears. I’ve tried watching others but I can’t finish them.”

I’m fine with celebrating the pregnancy but, celebrating because they found out its a boy or a girl is unreasonable to me. Like they were gonna celebrate either way (for a girl or a boy). The reaction to the reveal party is gonna be the same every time, So whats the point.

Dont tell me they would be upset if they found out it wasn’t the gender they wanted, coz thats just heartless AF.”

Why do people obsess over these random people who make their lives look better just for social media?

Why is there a bikini competition?

Why are we forcing kids to participate in these terrible pageants just for the entertainment of adult viewers?”

Literally allowing people like Kenneth Copland and Paula White to rake in their money while spitting all over their supposedly sacred Bible.”

I have nothing against religion, but why would anyone follow these guys to the point that they would be willing to give them money?

I just can’t wrap my head around why these guys are so rich.”

I really don’t understand why people are so obsessed with celebrities to the point of following every single thing they do in their lives.

What do people get out of idolizing some rich people who probably don’t even care about you?”

“Taking videos of yourself crying and posting it online.

Also don’t understand the people who sympathize with them.”

I just don’t get it…

I saw that show for the first time in the hospital, in the early hours of the morning, hopped up on painkiller and half awake while waiting for an MRI.

Sat there groggily wondering why there were people in fur suits on a reality show and wondering if I was hallucinating or something.”

It is puzzling to me that people will show up at a political rally and scream like they are at a Rolling Stones concert.

Not sure when this all started but it is very weird to me.”

I can’t get my head around country rap. My brother goes bananas for it and it’s awful to me.

I haven’t heard anything from the genre that I would consider innovative, thought provoking, or even halfway challenging.

I’m not trying to be a super smart guy here, I don’t have the time to type the pants on head stupid things I listen to when I’m in the mood for the auditory equivalent of Spam and eggs.

But what’s cool about music is you can find people pushing the boundaries in any genre, but country rap reeks of complacency to me.”

I have no idea why the most forward-thinking and progressive people I know regularly tune in to literal objectification every week.”

I have a theory.

They initially got popular because of their TV show. Now, every one on the internet seems to dislike them BUT, in disliking them, people still don’t stop talking about them.

Now when they keep talking about them, they get more popular.”

“Why anyone cares about the British Royal Family.

They are just a bunch a rich people.”

“Beyoncé, and how talking in a non-positive way about her is sacrilegious.

I once said she was overrated on Instagram and I received literal death threats.”

Loud, sticky, claustrophobic. You can’t talk, just drink and dance, which I’m awful at. After 30 mins I’m ready to leave, and I wouldn’t even enjoy it for that short period of time.

I honestly can’t get into the half-asleep triplet delivery of rappers nowadays, sh*t hit so much better back in the day.”

In the comments, tell us what YOU don’t understand the popularity of.