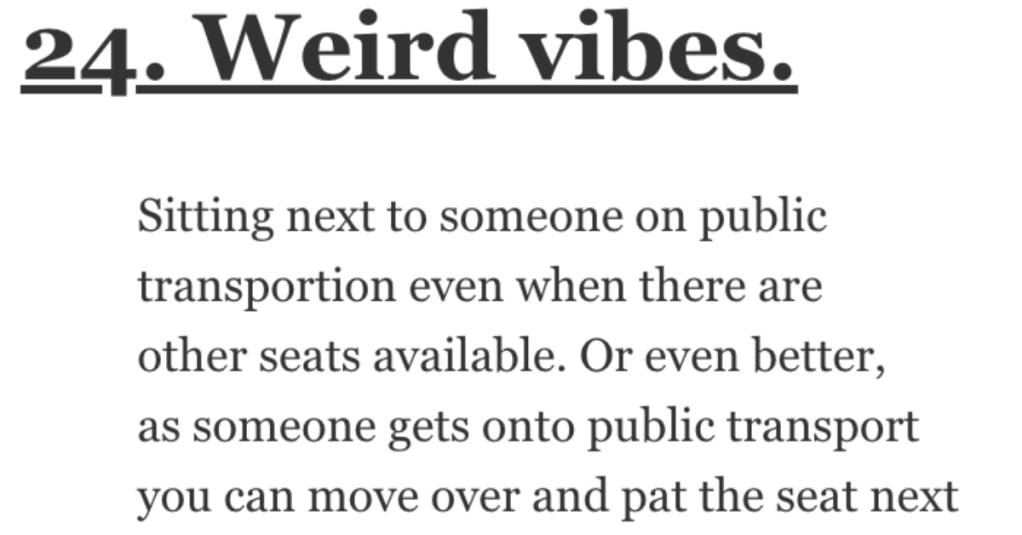 As someone who is fascinated by true crime stories, I think that there are far more people in this world acting creepy than people who are actually going to ever do something illegal.

You can be totally creepy, it turns out, and not break one single law – like these acts, which aren’t illegal at all (but might still earn you a visit from the cops all the same).

1. They definitely have a vibe.

Saying, “Think of yourselves as sisters” when introducing a much younger new wife to one’s adult daughter. My father-in-law did this.

My FiL was in his late fifties, his new bride in her early twenties, which was indeed younger than his daughter (my wife). As creepy as his comment was (made on first introduction as we all stood there in my doorway after they showed up unannounced), I don’t think he consciously meant to imply the incestuous subtext.

It was more like he was crowing about how he had attracted such a young wife. But his emotional intelligence and self-awareness were exactly that low that he could say such a thing.

He was a really difficult person in general. In the end, the marriage was short and tumultuous, with him eventually accusing her of physical abuse and theft. I think they were both using each other, and they both got more than they bargained for.

Leaving a piece of your body behind for your future generations.

My great great grandpa did this by having his skull removed and turned into a goblet for his daughter/ my great grandma.

Lasted about a few years before someone stole it..

In some states, it’s actually legal to take upskirt pictures with your smartphone, as long as they are wearing panties.

I only know this because a judge ruled a guy innocent for doing just that because of a law that was worded a certain way. No clue if the law has changed to include upskirt pics.

A national newspaper having a countdown for when a child actress becomes “legal” for s^x.

Answers to questions that will surely come. ….Yes. The Sun (UK). Emma Watson.

I loved that interview with Daniel Radcliffe. He was doing a play that had some s^xual content and he was asked if he found it unusual to be s^xualised at such a young age (think he was around 18-19 at the time).

His response was that “they had no problem doing it to Emma Watson”.

6. I’m laughing even though I shouldn’t be.

“Nobody is saying you can’t eat a banana Terry, but you can’t just stand on a street corner for 30 minutes and suck on it, you have to actually take a bite.”

I like bananas. I eat them a lot at work with lunch. In the military, I learned that when eating a banana, it’s okay if you bring the banana to your face. Not the other way around.

Go ahead, try it. Bonus points if you make eye contact with someone while your mouth is slightly open with the banana headed for it. Never gets old.

Using the urinal next to me when there were plenty of other choices.

How would you feel if the guy walks up to the urinal next to you and then, mid-stream looks right at you and says “Hey… nice watch.”? How uncomfortable is that?

8. He was probably already creepy, though.

Using a laser rangefinder to ensure you stay outside the effective radius of a restraining order.

Fortunately for the plaintiff, when the respondent is continually staying just outside of the distance specified in an order of protection it IS illegal and provides just-cause to get arrested.

Technically, you can stand on the sidewalk and stare into someone’s house through a window.

It’s not illegal as long as you stay off of their property, but it’s really freaking creepy.

believe the act of cannibalism itself is legal so long as you didn’t murder anyone to do it. If your homie gives you his arm to gnaw on, it’s fair game.

Some dude lost his foot in an accident and somehow was allowed to bring it home after it was amputated. Fucker fried it up and invited his friends over and they ate foot tacos.

When I was a child, we had a creepy horrible neighbor that would harass my family constantly. One of the things he did was stand at the corner of his yard and videotape me playing in a pool with my friends (we were around 8).

My parents called the police but were told that it’s legal if he’s on his property.

Parents using their kids for money.

My ‘favorite’ is when parents of autistic kids post shocking videos of their overwhelmed, distraught children having meltdowns under the guise of awareness.

It’s a bit horrific how little privacy kids get these days, especially when they’re not aware of the full consequences that content can have for them.

13. Ripped from the headlines.

Going on a vacation with your fiancé only to return home alone and immediately lawyer up and not answer questions about their whereabouts.

Sniffing the hair of the lady who fell asleep on the train.

Right up there with moms who don’t seem to understand that their son is not their boyfriend.

What kind of weirdo threatens their son’s spouse/girlfriend with the line “the first t*ts he loved were MINE.”

My dad is currently in an injury case against his old job. There’s been a car outside his house filming him for the last couple months trying to catch him doing compromising things to disprove his injuries.

17. Why would anyone think this is ok?

Media outlets (typically disquising it with “comedy”) putting up “______ turns 18 on ____” countdowns for child actresses. Natalie Portman was 13 when she got a countdown on her local radio station.

F**ks sake marry kate and Ashley were like 4 on full house when they got their countdown.

Parking across the street from an elementary school with binoculars

Technically not illegal, but you’d definitely get the cops called on you and make the news.

According to the FBI, performing vaginal examinations on six year olds during gymnastics training… at least for a while.

20. No matter how many times it happens.

Dating a girl you adopted once she turns legal age and not in your care.

In 1975, Tyler obtained guardianship of 16-year-old Julia Holcomb, so that she could live with him in Boston.[91] They dated and took drugs together for three years.
He also got her pregnant later, yikes

Those weird kid clothes that are like “I suck moms boob” or something.

Hanging your doll collection from the trees in your yard using string made from human hair.

September-October: Halloween got you cover.

November-December: Add Santa hats to them.

January-February: Make them “cupids” with wings and bows.

March-april: easterize them with flower crowns.

May: Mothers day, hang them in pairs, big doll with small doll.

June-july: give them american flags.

Sitting on a lakebed at night with a rebreather and no flashlight.

I literally shuddered at the idea. Light is good. Light is lovely. Light is what stops the idiot fish from running into you because apparently some of them just bonk around at night/in the dark and cause your soul to leave its earthly vessel in terror.

Sitting next to someone on public transportion even when there are other seats available.

Or even better, as someone gets onto public transport you can move over and pat the seat next to you, inviting them to sit.

25. It will definitely freak a homeowner out.

It’s technically legal to check if a door is locked, as long as you don’t enter without permission.

Edit: depending on where you live this could apply to both houses and cars

There’s a heartbreaking video of Paris Jackson trying to run from paps asking invasive questions about her dad who’d passed away.

The way she just cries out “please leave me alone” as they stick cameras in her face. Terrible.

They’re actually illegal in France since 2013 for age groups under 13 and 13-15 year old pageant groups are regulated.

Before social media it was the pageant doll thing in the 80’s – creepy as hell.

This one hits close to home. A good friend of mine lives in a major east coast city, as a single woman she is extra cautious. She was the victim of a known local “Instagram celebrity” this weekend.

Basically this guy follows people (guys and girls) around and records them. When they get annoyed and tell him to stop he gets more and more obnoxious, trying to get a reaction. He is careful not to cross the legal line for stalking etc. and does it in public, so be “expectation of privacy”.

He then posts the inevitable freak out online. I’m not going to share the page (my friend made the cut) because I don’t want to grace this troll with the page views.

Facing the wrong way in an elevator.

There’s no wasted motion doing this either. You just elect to turn around after you get to your floor and exit rather than when you enter.

Don’t be creepy, y’all. Nobody likes that.

If you can think of some other legal creepiness that’s not on this list, leave it in our comments!