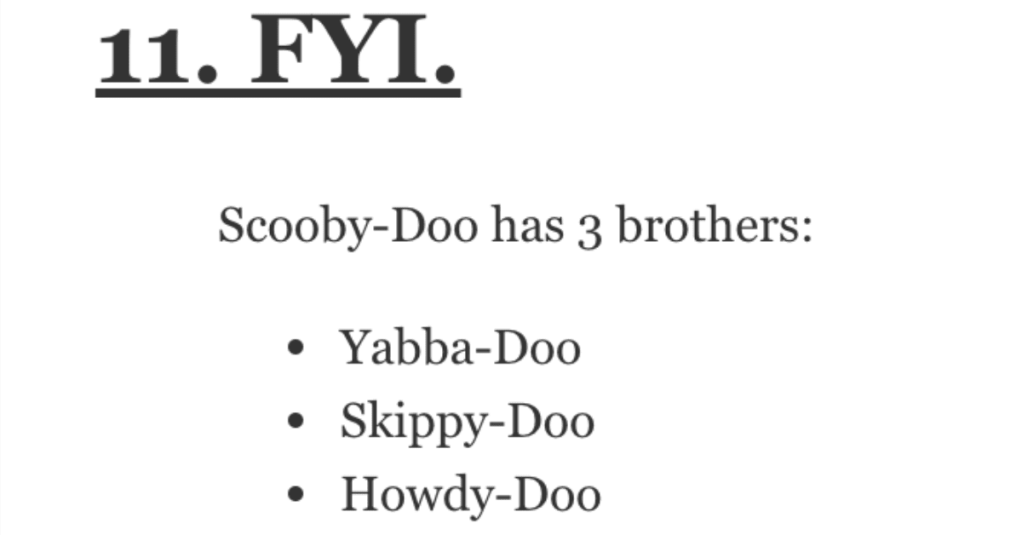 34 People Share Useless Facts They Think Everyone Should Know

If you, like us, adore dealing in random, interesting, and sure, occasionally useless facts, then you probably have a short list of your own favorites.

You’re also probably always on the lookout for more useless and amazing facts, too, which is where this list comes in – see if you can use it to add to yours!

He also has 5 cousins:

Thank you for your attention

The Purple Heart medals being issued today are from the stock ordered in preparation for the ground invasion of Japan in WW2.

Military strategists estimated there would possibly be over a million casualties in the proposed invasion.

3. History is so cool (in retrospect).

The Hindenburg was only the 5th most deadly airship disaster. 2/3 of the people onboard survived. It just happened to take place just outside of NYC and was photographed, recorded on video, and broadcast live on radio.

Of the other 4 crashes, 2 were over water (USS Akron and Dixmude). These and 1 other (R101) took place at night. R101 was a civilian vessel and still a major press event. Its loss did cause the end of the program to knit the British Empire together with a fleet of airships, but major LTA programs still existed in Germany and America. The remaining crash (R38/ZR2) did take place in daylight in front of thousands of witnesses. It, though (as with Akron and Dixmude) were military ships, the loss of which just doesn’t have the same impact on the general public as civilian vessels such as Hindenburg and R101.

There’s a good chance that Hindenburg was lost because of the inexperience of her politically-reliable (Nazi) crew. Dr. Hugo Eckener, the President of the Zeppelin Company, was an ardent anti-Nazi and the greatest airshipman ever to live. He never took an unnecessary or uncalculated risk. He was, though, forced to make more and more concessions to the government as the 30’s went on.

It is likely that the fire was ultimately caused by unnecessarily-rough handling on a pre-landing sightseeing jaunt over Manhattan. This caused a structural wire to snap, cutting a hole in a gasbag, and allowing the hydrogen to mix with air, forming a combustible mixture that ignited when the ship’s mooring lines touched ground and the charge between the ship and the earth was equalized.

4. This just makes me laugh.

Lego is the biggest tyre manufacturer in the world.

Because of this, TIL pterodactyl means wing finger

6. That’s something I never want to see.

During mating season, groups of male whales basically run a train on females. While one male has his turn, the others float around upside down just under the surface, which leaves their giant d%*ks waving around in the air.

This is one of the main explanations for the old stories of sea monsters.

It is estimated that bears kill over two million salmon a year.

Attacks by salmon on bears are much more rare.

Due to the shape of the North American Elk’s Esophagus, even if it could talk, it would be unable to pronounce the word Lasagna.

A friend in college who just loved animals randomly told me one day and I had the same question but now it’s the only thing I can think of when someone mentions useless facts.

There is a specific word in the English language for the egg of a hen.

That word is CACKLEBERRY.

No relation to dingleberry.

There’s an illusion many will have experienced known as “the stopped clock” illusion, where you’ll flick your eyes onto a clock face and then look away without observing any movement in the second hand, despite it feeling like you were looking for longer than one second.

Which is possible because of the “lag” in our body’s processing speed, from received light, to image generation.

So you actually were looking at the clock for longer than a second, but some of that time was actually the (now) past, posed as the present.

All these edited out “flicks” amount to around 40 minutes per day.

Nobody would see you get sucked into a black hole. To them, you’d just stop at the event horizon and proceed to become more and more redshifted until you disappeared.

Useless now, but maybe not so useless in the future.

Finland is the most metal country in the world.

Flowers arrangements at funerals originally served to mask the stench of rotting corpse.

The first documented instance of the “high five” occurred during the 1977 World Series.

I would’ve guessed the high five would’ve been around since the beginning of time.

At the busiest times of the day there can be as many as a million people in the air in airplanes at a given time.

There’s more of a chance you can die by getting hit by lightning then there is dying in a plane crash. And yet I’m still terrified to get on one.

16. An American started it.

The Watermelon Riot occurred on the evening of April 15, 1856, in Panama City, then the capital of Panama State in the Republic of New Granada. After an American took a slice of watermelon from a street vendor and refused to pay for it, a verbal altercation ensued and then quickly escalated when shots were fired.

An angry mob of locals converged on the site and began fighting with the Americans. Before order could be restored, at least fifteen Americans and two Panamanians were killed.

American businesses, including the railroad station were extensively damaged or destroyed.

The largest edible fruit native to North America is the pawpaw. The reason they’re not more popular is because they go bad in a few days so they’re not good for long term storage.

I’ve never had one but I’ve always wanted to.

Birds don’t fart but spiders do.

That was always my dad’s favorite joke. He’d fart, and then “did you see that spider run under there?” as if it was the spider that farted.

Small Me thought that was hilarious.

There are roughly 800 corn kernels arranged in 16 rows on a cob.

and each individual silk goes to it’s own individual kernel (better?)

My brother’s girlfriend had a pet bat. I learned that bats, or at least this species, purr somewhat like cats when petted.

Apparently that was also 4x the legal limit… I mean what were they thinking with that rule?

22. You’ll be thankful for that if they ever lob feces.

Laws protecting animals from physical abuse were created in America before laws to protect children of similar abuse.

Laws protecting children only got some attention after a judge used a law that protected animals to save a little girl that got almost killed by her mother. The judge argued that humans are also animals so she should be protected by that law.

24. For the time travelers in the house.

I once had a 1993 Chevy Beretta and one time I locked the keys in the car. I called my friend I had bought it from to see if he had a spare key, he said ” just put any old key in the door and it will pop open” I couldn’t believe when my house key open the car door. Stopped keeping anything in there after that haha

Mario has overalls so his arms could be distinguished from his torso even with very primitive sprites. Similarly his hat and mustache are to hide his hair and mouth.

Barnacles can have penises up to 8 times their body length.

While length doesn’t vary significantly between populations, thickness does, with barnacles in more turbulent waters having girthier things to prevent them from snapping off in the current

A lobster is more aerodynamic than a Jeep Wrangler.

The top reply to this comment last week was, everything is more aerodynamic than a Jeep.

The cheetah is the only cat that can’t retract its claws.

My damn cat was reaching under the dishwasher the other day and got his claw stuck. Started yowling like he had it caught in a rat trap.

It took two of us to calm him down enough for me to reach under and dislodge his claw from… nothing. He was faking it the entire time and just wanted attention.

Domestic rats are actually really into cleaning. Some will even use a certain area of a cage to store trash.

Source: I’ve owned rescued feeder rats for the past several years. They stuff any trash into an extra bowl and have not been taught this behavior.

Annually, there are less shark bites in the world than the number of people bitten by other people in New York alone.

The banana tree is not a tree and is in fact the worlds largest herb.

And bananas are berries. And strawberries are not berries.

What you mistake for seeds on strawberries are actually ovaries.

If you open your eyes in a pitch-black room, the color you’ll see is called “eigengrau.”

eigen = own Grau = gray So it’s your own gray

Sharks have been around longer than saturn’s rings.

Add this to the long list of things that sharks are older than. It’s truly impressive how long they’ve been around.

What’s your favorite useless fact? Drop it in the comments!