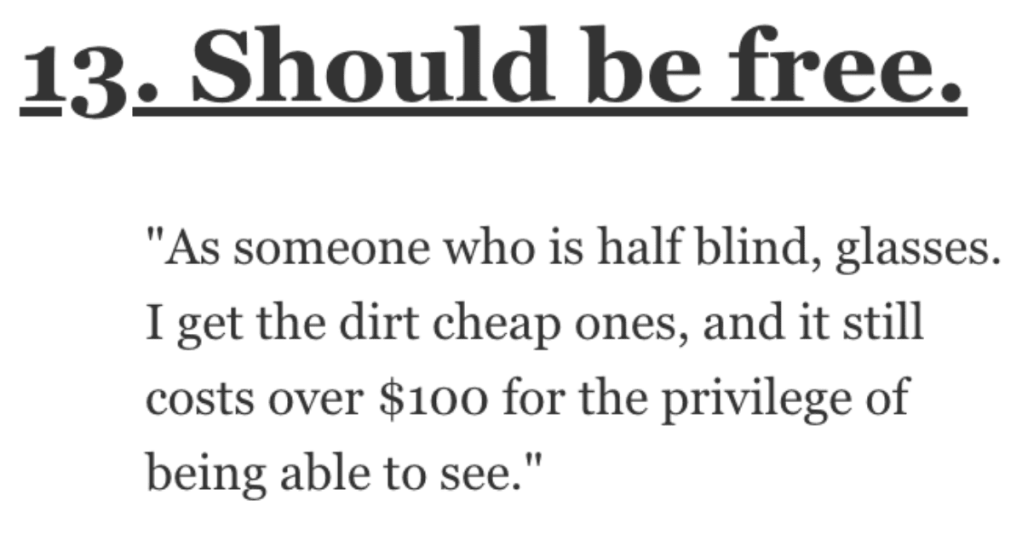 35 People Talk About Things They Think Are Ridiculously Overpriced

You know when you turn over the price tag on something and your mouth just falls open? Maybe you laugh a little because of the shock, or show it to a friend, but deep down, you know for sure that the thing – whatever it is – is not worth what’s being asked.

These people had some moments like that they couldn’t forget – and so here they are to share them with all of you.

my friend’s father was consulting at Visa (the card company) and he recommended a mutual friend to solve this IT problem and put them in touch. The friend quoted them $1500.00. The company wasn’t interested.

I don’t remember the exact numbers, but I once knew a guy who worked at a place that made large bolts.

If I remember correctly, they would charge the general public something like $8/bolt and the military $85 for the same exact bolt and they didn’t bat an eye.

There’s so much f**king waste with our military, right down to the nuts and bolts.

I accidentally bought an illegally imported 4 pack of Juul pods from Canada. I instinctively said mint, knowing they didn’t exist in NY anymore.

Well, he pulled out a hidden pack with French warnings on it. I paid over $10 per pod.

Food in movie theaters. The prices of everything is jacked up so much !!

For the big blockbuster movies, theaters have to give 100% of ticket sales to the studio for like the first 6-8 weeks after release. So theaters actually lose money showing movies.

That’s why they have to charge so much for food and drinks.

7. Souvenir anything is a no-go.

8. Tattoo this on your brain.

Quite a few unnecessary “cloud” subscription services. There’s a lot of them that don’t need recurring costs.

A lot of times you’re not getting anything extra accept maybe a bug fix or upgrade.

You should never have to pay for bug fixes and there was a time if you wanted a major upgrade, you’d just buy it flat out.

But if you heal zombie villagers.

They’ll give a permanent discount of 1 item for whatever they’re selling.

The first time I saw a my pillow ad, I originally thought it was like a comedy sketch and he was advertising HIS own pillow.

Like, just the one pillow that he sleeps with every night, and you could just rent it out or something for a few days.

If there’s any doubt on Diamonds not really having any value. Just look at the resale price.

You won’t get sh%t compared to what you initially paid for it. At first I thought Diamonds were in the same league as Gold, as in actual rare Earth stuff.

Turns out it is just a great case study of controlling supply and advertising to make the big bucks.

As someone who is half blind, glasses.

I get the dirt cheap ones, and it still costs over $100 for the privilege of being able to see.

Discovered over 100 years ago and is now synthetically produced and still is being sold for hundreds or thousands of dollars in many cases.

The drug companies decided they were going to make their gigantic profit margins off life-saving medicine.

I remember when you could get test strips for like $10 over the counter. Now everyone wants a prescription and a wad of cash.

Like I’m never not going to be diabetic, why do I need to keep renewing this prescription…

15. Same with wine at a restaurant.

As a machinist who has made things for the military, most people don’t understand what overpriced means.

I bid a job for the military and the told me my bid was too low. I added a zero and got the job. Price I initially quoted would have been profitable for me.

I don’t disagree with wanting the day to be special and memorable, but the industry jacks up the prices if they know it’s a wedding, and there are way more affordable options while still getting to celebrate love and the future.

No reason to break the bank. Use the money saved for even more memories.

A few years back Nordstrom was selling a rock in a leather pouch for $85.

Neiman-Marcus used to put out the most hilarious Christmas gift catalog.

One year they offered his and hers Lear jets. No kidding. Just about anything in that catalog was wildly overpriced. More recently, they offered in their Christmas book, as a potential gift, a Boeing Business Jet for the wonderfully affordable price of “north of $35 million.”

A couple of years ago, Mark’s and Spencer Food, a high end supermarket in the UK, tried selling “Cauliflower Steak” which was a thick slice of cauliflower for £2.50. It was covered in plastic

You could literally buy a whole cauliflower in the same row a bit further down for 40p.

They were crucified for it, it was hilarious

I saw an external ZIP disk reader in the clearance bin of Wal-Mart for 10% off it’s original price…in 2011.

Companies hike the prices of products by hundreds of dollars just because the name of a celebrity was on it.

As if a Wi-FI connecting juicer was even necessary, let alone worth the price point.

In a downtown consignment shop, an oil painting of sheep grazing in a meadow had a price tag of $18,700.

It was by an unrecognized artist. When asked why it was priced so high, the shopkeeper said “because someone will like it and buy it.”

I remember seeing a basic scientific calculator for like $300.

I got an 84 when it first came out in the early 2000’s. It is literally the same price now and has barely been upgraded in nearly 20 years.

That thing should be graphing in 3D, wirelessly connecting to other calculators to share data sets, etc. and be lightning fast, but nope. Still the same old Windows 95-era technology.

That $6 asparagus water Whole Foods sold a couple years ago; it was a 16oz bottle of water with 3 stalks of asparagus.

Also, everything from goop.

It is the same thing with boats. An outboard motor is like always $1500 or more.

However, if you buy the motor with a boat attached to it, you are paying the same price.

I saw a small thing of Lysol wipes being sold for $22 in a store last week.

Smells like price gouging, report that s**t my friend.

Google ‘where to report price gouging’ in your state/area and fill it out.

Beef jerky here in the UK.

In the US, Beef Jerky costs around 30 dollars a pound, around 23 pounds in the UK.

It is one of, if not the most, expensive beef products you can buy, other than a live cow.

When I was in Dubai there was a cell phone store in the mall that sold phones that ranged from $30k -$120k.

They were basically phones covered in diamonds and gold. That’s $100k for something that is probably already obsolete.

32. No one could have foreseen that.

TP on offer up back in March.

I once read a review of an “audiophile” grade ethernet cable.

This guy actually claimed changing the ethernet cable from his router to his PC made his music sound better.

35. That was someone’s childhood dream.

There used to be a nerdy collector’s store nearby, and when I was about 10 (20 years ago. Pfff…), I used to love it in there. Even if not buying anything, I was stunned by the individual Pokemon cards that they had in the glass cabinet, with their rarity emphasized by their ridiculous prices.

There was one that always caught my eye. The Ancient Mew card. With baffling illegible text, the WHOLE CARD being shiny and it being Mew, this was amazing. The £150 price tag showed that this thing was SO SPECIAL. They had it displayed in its own, velvet lined box. Me and a couple of friends dreamt of owning that thing one day. For reference, the Charizard was £15.

It turned out that it was only a promotional card for Pokemon The Movie 2000.

I bought one due to sheer nostalgia on eBay a few years ago, still in its packet, for £4.

Each of these would have made me laugh; they’re so ludicrous.

What’s the most memorable moment something like this happened to you? Share it with us in the comments!