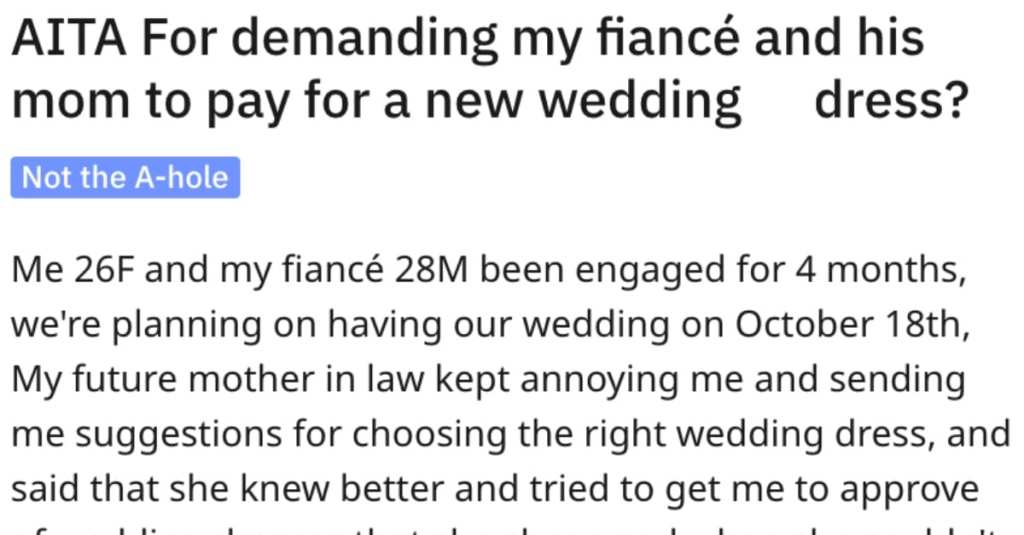 Do you want a life tip that could potentially save you some major headaches?

Never, EVER, touch a woman’s wedding dress. EVER.

I didn’t think there would be a whole lot of gray area about this, but a woman took to Reddit’s “Am I the *sshole?” page to ask if she was wrong for getting all fired up because she found out that not one, but TWO other people tried on her wedding dress…

AITA For demanding my fiancé and his mom to pay for a new wedding dress?

“Me 26F and my fiancé 28M been engaged for 4 months, we’re planning on having our wedding on October 18th.

My future mother in law kept annoying me and sending me suggestions for choosing the right wedding dress, and said that she knew better and tried to get me to approve of wedding dresses that she chose and when she couldn’t enforce her decision she demanded that I take her with me to buy my wedding dress so she could have an opinion.

Before I went shopping I called her to ask if she wanted to come but started making excuses about how busy she was with my sister in law, I went shopping with my mom and I was able to find a really nice dress although it cost me a little over what I saved up for, but it was worth it.

I made some changes to it and it was perfect, it arrived to my apartment at the end of the week, I made sure it was stored in a safe place so it doesn’t get ruined.

Yesterday, I got back from my mom’s house, and found that my fiancé wasn’t home neither was the dress, I called him immediately knowing that he must’ve taken it to show it to his mom since she continuously asked to see it and refused to have me send her pictures of it on Facebook.

I was so mad when it was confirmed that my fiancé took it to show it to his mom, he said he was gonna be home in 30 minutes after he went to the supermarket I waited for longer than I had to and then when he arrived I ran to get my dress that was buried underneath grocery bags.

I took it to check on it and it’s zipper was broken and the dress itself (fabric) was stretched out, I was like what the f*ck happened to it, my mother in law must’ve tried it on, because it looked ruined, the straps were almost loose.

I had to call my mother in law when my fiancé told me his mom and sister took turns to try it on, I was absolutely livid, she told me she did nothing wrong and that I was making a big deal out of it.

She said she’d get a replacement for the broken zipper, but I told her to pay for a new dress since it was stretched out and no longer fitting, she refused and said that I probably wasn’t happy with my dress choice and wanted to her to pay so I could get a new one.

I yelled at her for trying it on and ruining it, that she and my fiancé were responsible for ruining my dress so they should pay for a new one, It’s done, no longer fitting, the straps are in a horrible condition, my mom said she’d pay for fixing it but I just hate it now that someone else wore it before me.

I’m mad at both of them and seriously considering postponing the wedding.”

Uh oh…that was a terrible idea.

Let’s see what people had to say.

This person stated the obvious: her fiancé and his family were way, way out of line on this one. 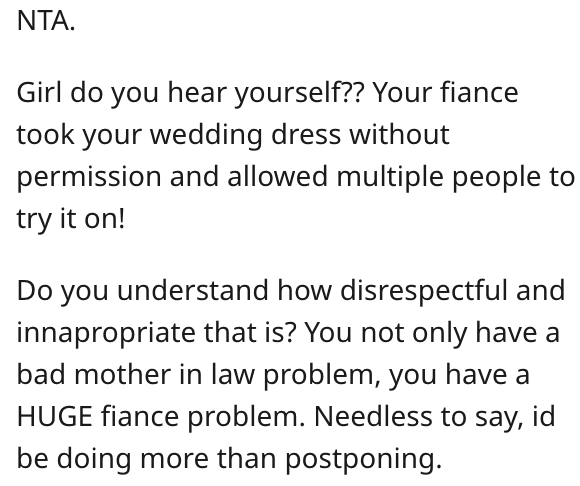 The Reddit user was pretty mystified by the whole situation. I mean, who does something like this? 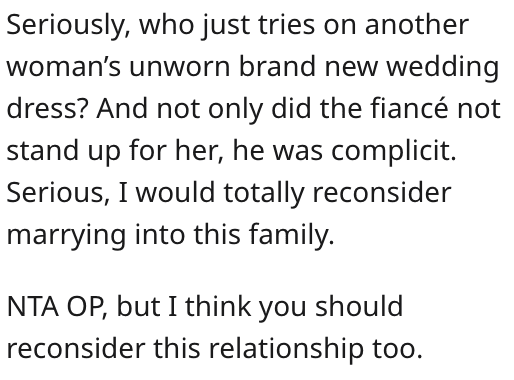 Another person said that this is, in fact, a big deal, contrary to what her finacé says about the situation. 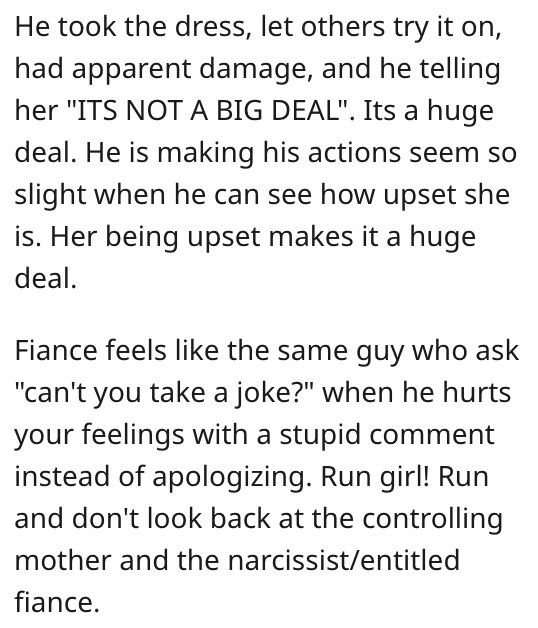 An individual made no bones about the way they feel: she needs to dump this guy ASAP.

Finally, this person also suggested that the woman shouldn’t marry this fella and that his family is and always will be a major headache. 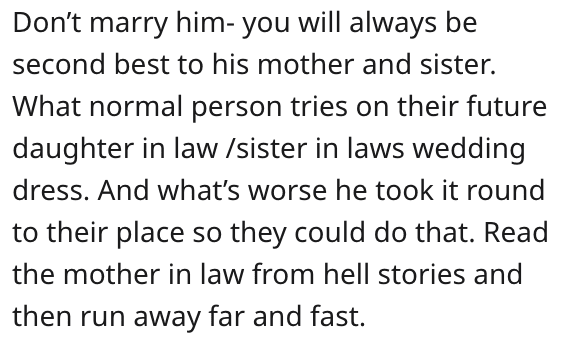 Ladies, we want to get your thoughts on this situation?

Would you be mad if this happened to you?