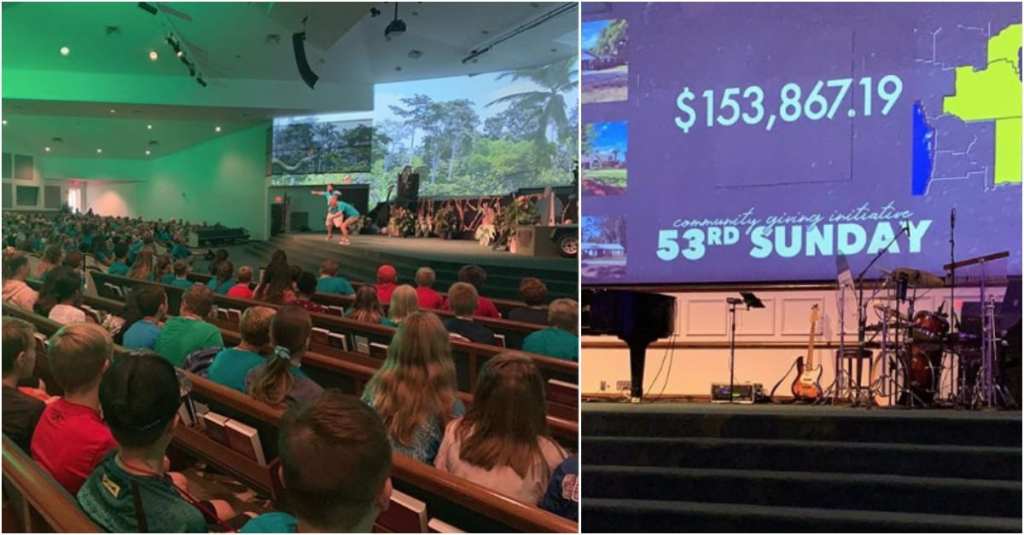 Churchgoers at the Stetson Baptist Church in DeLand, Florida, went so far above and beyond the call of duty that we just have to tell you all about it. The church’s leaders set up a fundraiser with a goal of raising $48,000 to split between two non-profit organizations: One More Child, which raises money for foster homes for kids, and RIP Medical Debt, which buys out medical debt and helps pay off medical bills for people.

Yesterday we took up an offering so we could give 100% of it away. #ThatIsAwesome #StetsonChurch #DeLand #3Cirlces

A post shared by Stetson Baptist Church (@stetsonbaptistchurch) on Jul 1, 2019 at 6:34am PDT

The churchgoers ended up raising enough money to pay off an incredible $7.2 million in medical debt that will help out 6,500 families across the state of Florida.

What a Sunday! Thank you Church for being the church!

A post shared by Stetson Baptist Church (@stetsonbaptistchurch) on Jul 7, 2019 at 9:21am PDT

350 generous members of the church raised a total of $153,867.19, which will be split between the aforementioned charities. RIP Medical Debt purchases medical debt from hospitals and healthcare providers for pennies on the dollar and wipes out the debt of people across the country.

“For the most part, hospitals don’t have the infrastructure to pursue the debt they have on the books. More and more they’re outsourcing it. Sometimes it gets sold several times before it comes to us. We only buy debt for those who are the least likely to be able to pay.”

Because the organization buys the debt at such a huge discount, the donations go a very long way. For example, $72,000 raised by the church will end up covering $7.2 million in debt. On top of that, RIP Medical Debt does not take a cut for their services.

Dan Glenn , the senior pastor of the church, said, “I can’t even begin to imagine the impact this will have for people. I don’t know what the rest of their life might be like. But what I do know is that, in this one area of significant burden, they’re going to be able to say: ‘I’m free.’”

Sixty-five hundred families in Central Florida are going to get letters in the mail saying their debt has been paid by people they’ve never met. Yes, Stetson Baptist Church used an extra Sunday( June 30th) , this fiscal year to collect money and pay for the medical bills of the patients of their home county of Volusia. “It’s one thing for us to say, ‘God loves you,” Senior Pastor Dan Glenn told his congregation. “It’s another for us to show it.”? . Although the initial goal of the church in DeLand was $48,000, the congregation of about 350 responded to the call and raised a staggering $153,867, more than three times the original goal.? . They used a New York charity, RIP Medical Debt, which buys the debt for just pennies on the dollar, to leverage the money’s impact—and ended up wiping out $7.2 million of unpaid medical bills.? What a great way of serving God. What a great way of serving humanity?❤️ @ripmedicaldebt @stetsonbaptistchurch #stetsonbaptist #stetsonbaptistchurch #seniorpastordanglenn #medicalbills #ripmedicaldebt #goodvibes #goodvibesonly #goodnews #goodnewsonly #humanity #god #christianity #centralflorida #florida