Not all heroes wear capes…but they still might be in some kind of uniform.

Flash floods inundated the city of Istanbul, Turkey, recently and a city worker named Metin Keskin was on the scene. Keskin noticed a lifeless cat being swept away by water when he snatched her up. He said that the poor kitty was unconscious and not making any sound.

Keskin knew that the clock was ticking for the kitten, so he decided to perform CPR on her right in the middle of the street. He breathed into her mouth and massaged her chest to try to get her to start breathing again. 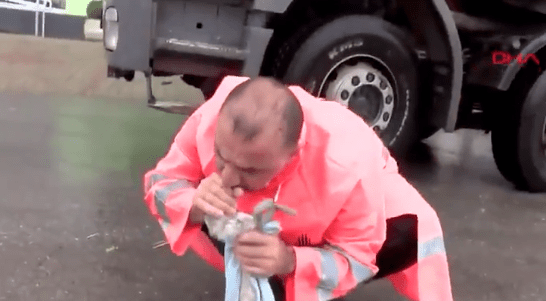 Precious seconds ticked away as Keskin alternated between breathing into the cat’s lungs and rubbing her chest and stomach in the hopes of getting her heart pumping again.

“We were working to get the road open after the rain when we saw the kitten. It was unconscious, like dead.”

A few moments later, the soaking wet cat let out a faint meow. She was then rushed to an animal hospital so she could make her recovery from the traumatic incident.

The entire dramatic incident was captured on camera.

When the kitty was well enough to be released, Keskin and his family decided to adopt her. Keskin said, “It’s very healthy now. I’m so happy, too. It’s become our kitten now.”

How great is this story? I’m a big fan of this fella and the work he did.