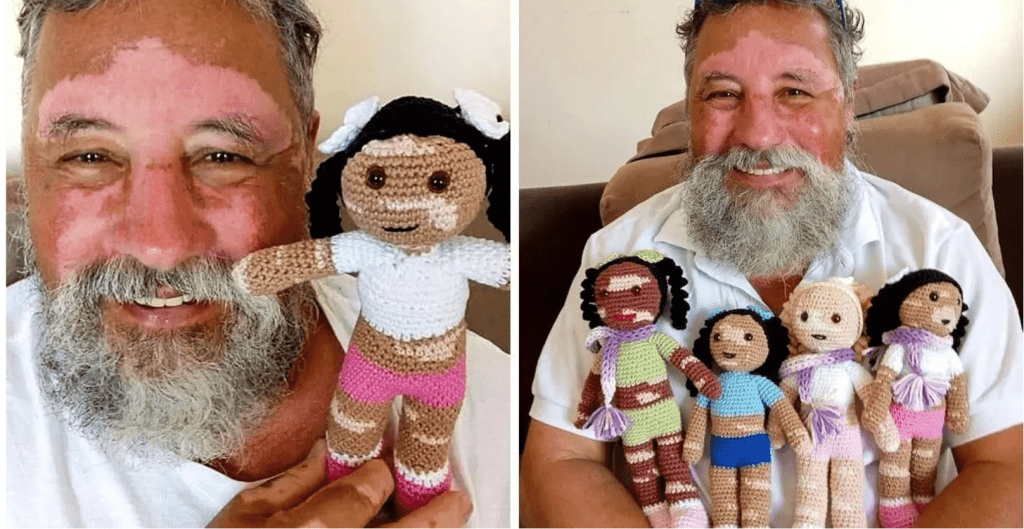 Having any kind of noticeable skin ailment or disease can be embarrassing for anyone who suffers from them. That’s why this story is so great, because it makes young people who suffer from Vitiligo feel more comfortable dealing with their condition.

Vitiligo is a skin condition where a person loses their pigment and their skin turns white in patches. The disease is not harmful, but some people who suffer from it are embarrassed about the way the condition makes their skin look: especially children and young people. Vitiligo affects 1-3% of the population.

A 64-year-old Brazilian grandfather named João Stanganelli Junior has suffered from the condition since he was in his 30s. He recently retired and decided that he needed to do something productive with his spare time. Stanganelli and his wife both took up crocheting and his first creation was a doll for his granddaughter. He wanted to make sure she would remember him by the doll, so he added a few Vitiligo patches to it to match his own.

That’s when he got the idea to make inclusive dolls, including ones that would have the condition that he suffers from. Stanganelli also makes dolls in wheelchairs, as well.

He said, “The spots I have are beautiful. What hurts me are the flaws in people’s characters.”

Another of his dolls is representative of a young person with alopecia.

Which one of these are your fave? Let us know in the comments!