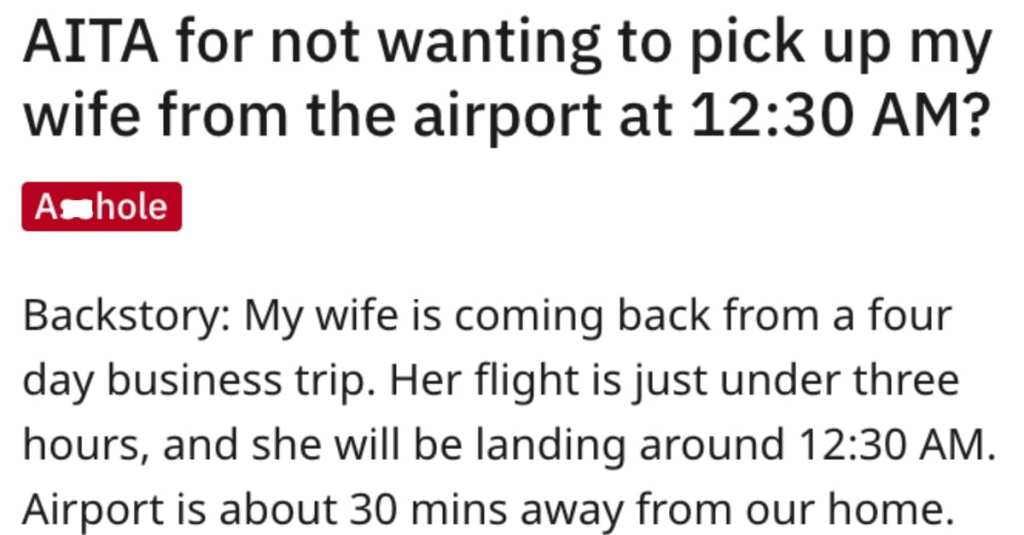 Oh, boy, this story that you’re about to read brings back some bad memories for me because I’ve had this conversation with a significant other before.

And sometimes, the “pick me up or else” stories really do end relationships.

And this guy turned to the good people of the Internet for some advice.

Alright, buddy, let’s see what you had to say on the Reddit “Am I the *sshole” forum.

AITA for not wanting to pick up my wife from the airport at 12:30 AM?

“Backstory: My wife is coming back from a four day business trip. Her flight is just under three hours, and she will be landing around 12:30 AM.

Airport is about 30 mins away from our home. She generally hates flying in this late, and asked if I could come pick her up from the airport (To clarify: the airport is O’Hare. It’s a huge, busy airport.

There are hundreds of business travelers coming through even at 1 AM, and a huge fleet of taxis / ubers standing by to take them home. If this was a little airport and she was waiting by herself for a taxi for 20 mins, you would not be reading this post. As much as people are sensitive to it, safety is realistically not a huge issue here.)

I have to get up early and commute to work the next morning, and wouldn’t be getting home until 1-1:30 AM. I get why she wants me to come, and I know it would be the good thing to do….. but I also feel like she’d be completely fine just taking a taxi this one time…

Am I just being lazy, or am I being a lazy *sshole here Reddit?”

Edit: (Sigh.) Goddammit. I kind of knew in the back of my head that I should just go, but thank you for confirming. I’ll suck it up and go get her. Thanks Reddit!

Edit 2: I went. She had a sh*tty flight and was surprised/overwhelmed to see me and cried happy tears. It was a cute moment. Your comments and shaming made it all possible. Ok off to bed.”

Well, at least it ended well…

But you know that folks on Reddit had to weigh in because that’s what they do!

This person definitely thought it would be the polite thing to do NOT to ask your significant other to pick you up at a late hour. 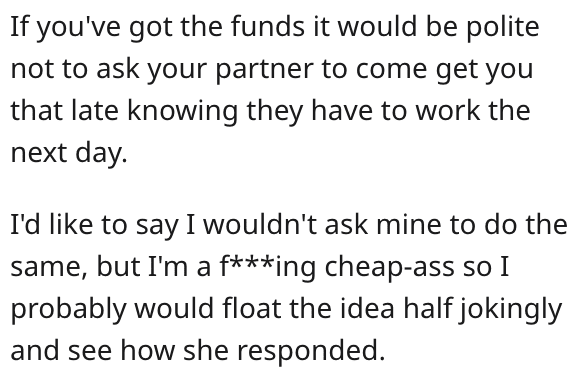 And this reader didn’t think anyone in this situation was wrong. 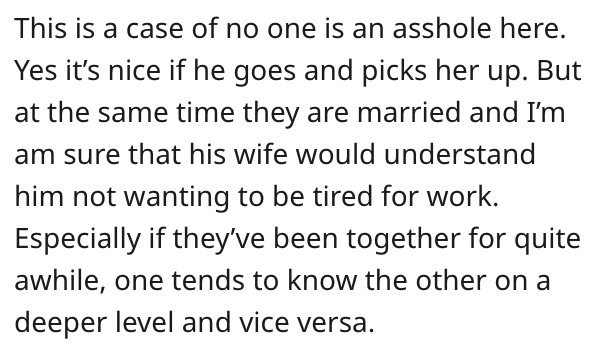 This Reddit user made no bones about where they stand on this issue.

I bet your partner doesn’t argue with you about it! 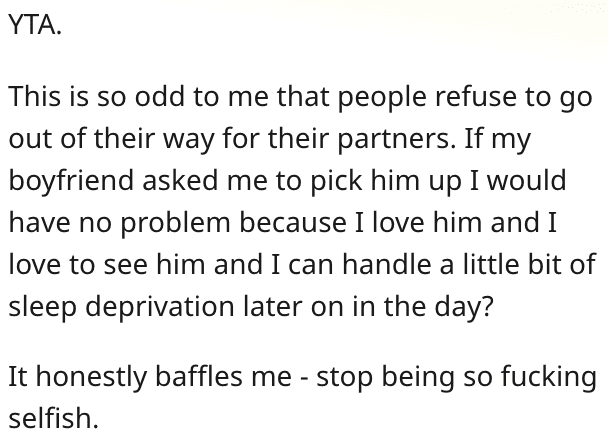 This individual made a good point…your wife asked you to do this for a reason, dude.

But then another Reddit user came to the man’s defense and argued that anyone can just take an Uber and make life a little bit easier for everyone.

Is this guy a jerk or is it really no big deal?

Talk to us in the comments and share your opinions. We’d love to hear from you!