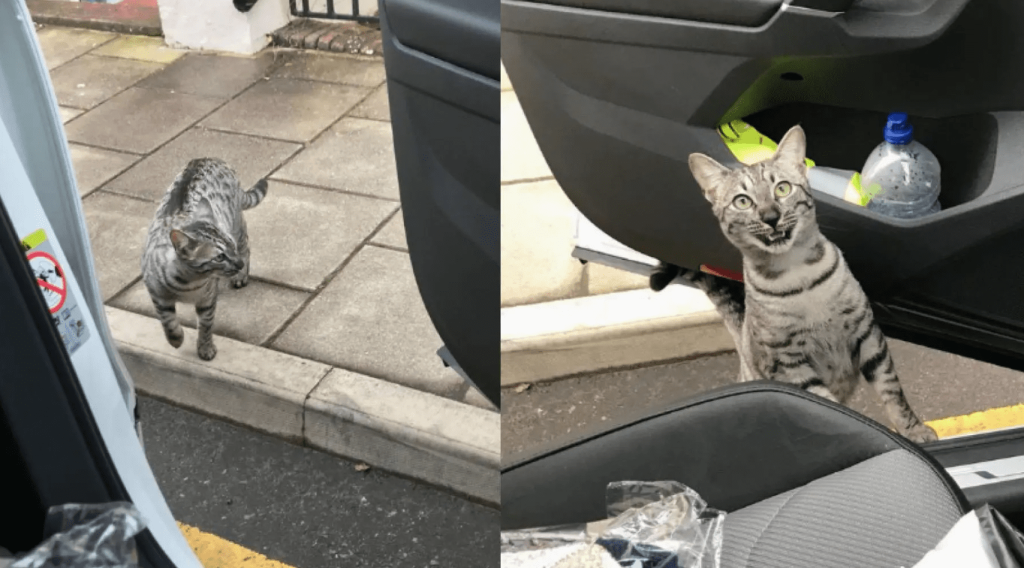 This isn’t news to anyone out there who has a cat, but they like to play by their own rules and they do what they want: ALWAYS.

So perhaps it’s not too surprising that a guy in England who was out for a drive in his neighborhood when he noticed a familiar feline about 1/4 mile from his home…it was his cat, Lewis, out for a walk by himself.

When you bump into your cat 1/4 mile away from home.. pic.twitter.com/AKuAbW7HWD

Lewis looks kind of shocked to see his owner out and about, doesn’t he? The pics went viral because this is an amazing story, am I right? His owner said he does sometimes wander away from home, but usually when the human is out on foot, not in his car.

“What happened yesterday morning is normally his routine is he’ll annoy us until we wake up and feed him and then he’ll go out for the day.

When we woke up he wasn’t there and he was nowhere to be found so we both went to work thinking he’d come back soon. I was driving down the road and went past this place where I know he hangs out sometimes, and low and behold there he was.

I wound down the window and called him, and then he suddenly looked shocked, I opened the door and then he ‘popped up’ and I got the photo that everyone has found funny on Twitter.

He jumped in the car and then I didn’t know whether to push him out the car because I needed to go to work, but I didn’t want to do that, so I drove him home, gave him some breakfast and then went to work.

I couldn’t really get my head around the reaction on Twitter and when I woke up the next morning my partner nudged me and said it was on 50k retweets.

I only took that picture to send it to my partner Sam that I’d found him, and it was only because of his funny face that I put it on Twitter.”

Yep! Drove him back home for his breakfast! 🙂 pic.twitter.com/obKWGtKQG9

Oh my god, he looks so happy to see you. Look at his little smiley face! ??

Apparently, Lewis is a total character so his owner has been sharing some funny Twitter pics from days past.

Shuddup all of you. pic.twitter.com/xjiqh7yBP3

Just taking the cat for a walk. Brb. pic.twitter.com/ewlL88LEUL

I love this little kitty. He seems like he has so much personality and would be hilarious to be around, doesn’t he?