Woman Randomly Finds a Stuffed Dog She Lost Years Ago or Is It an Impostor? A Thread.

Almost every child has that one soft item that brings them comfort—a Linus blanket, if you will. They would never give up their blankie or doll voluntarily without tears and trauma. But, sometimes, it gets left behind or dropped somewhere.

While I was moving from halls, in a terrible misunderstanding, the builders in my new student digs managed to fit my room. I lost a LOT of possessions, Crackers being among them. Anyway I forgot about him because I was 19, a student and probably high or something. Bye Crackers.

A woman named Vittoria Gallagher had suffered such a loss when she was a young university student. Thirty years ago, her grandmother had given her a stuffed dog that Gallagher loved very much and called Crackers. But during a move while she was in college, she lost Crackers and hadn’t seen him since.

Of course, Gallagher mourned her loss, but did her college thing and otherwise moved on to enjoy a full, productive adult life.

Eighteen years later she thinks she sees her beloved toy on the street.

Fast forward 18 years and I’m en route to my sister’s house, not far from where my old student house was.

I mean, it’s a good walk but not FAR far, it’s the same town at least.

And I look down and WHAT THE F–K. CRACKERS is staring back at me.

It’s uncanny. Can it be him? 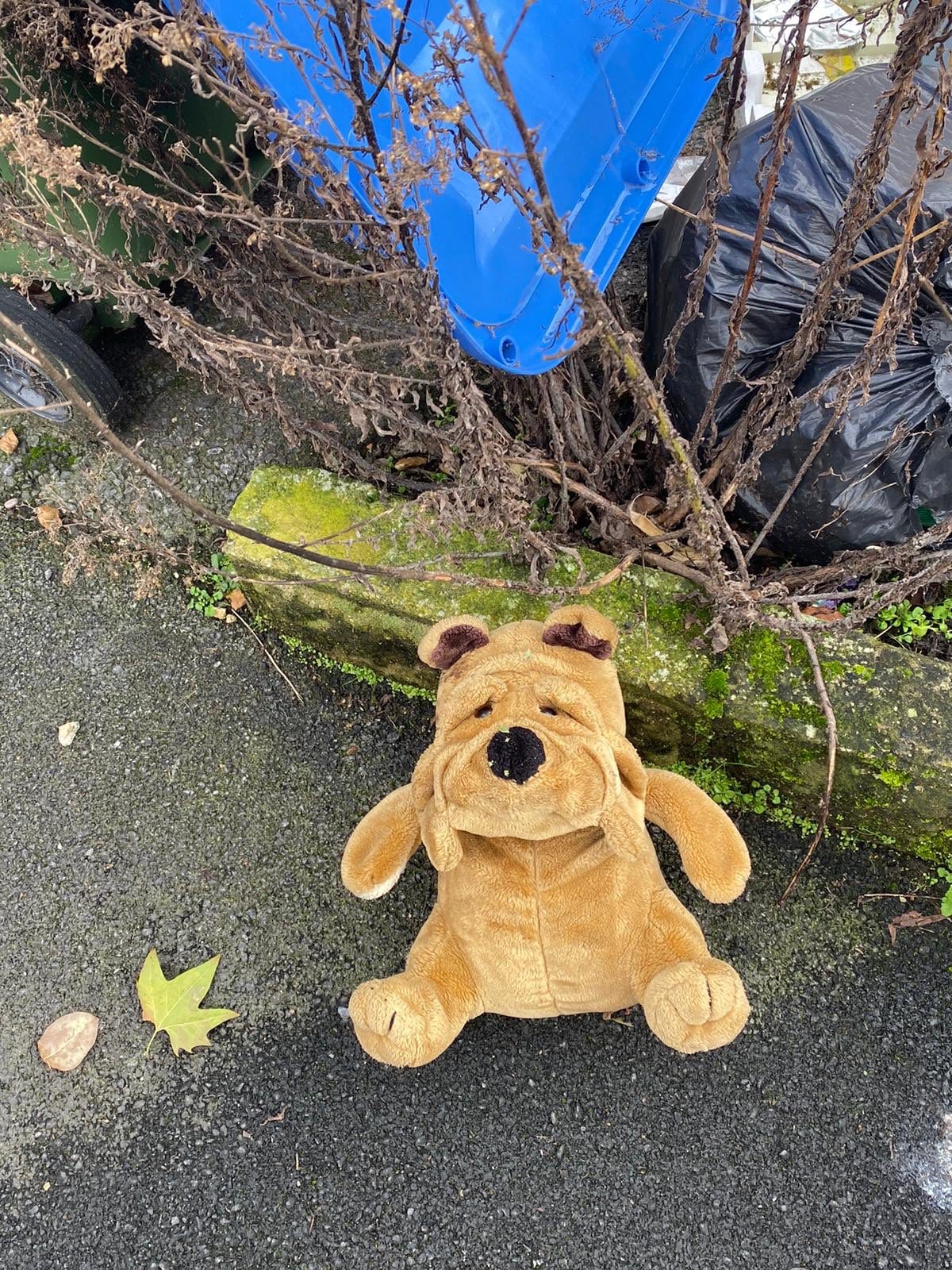 It can’t be but WHAT are the odds someone in Southampton has the exact same 30-year-old toy I got from my Nan?

I’m not even from here.

She was so surprised to see Crackers she stopped and texted her sister a photo.

“We’re pretty sure it’s him,” she writes. “He must have gone to charity shops and found his way back to me. A CHRISTMAS MIRACLE.”

(Ally is rational and never uses exclamation marks, so I knew this was big.) (Also I recently reconnected with my Grandma’s side of family so it was quite poignant, like a thanks from her.)

Gallagher picked up the filthy toy and carried it home where she tossed it into the washing machine.

“Picked up soaking wet probably urine-infested Crackers,” Gallagher writes. “I am on Cloud 9 being reunited with my best friend that I totally forgot about for two decades.“

Delirious with joy, she propped Crackers up in her kitchen believing this was a sign that she was living a life her grandmother would approve.

Happy ending, right? Umm. So, a thing happened a couple of weeks later.

Gallagher’s sister visited their old childhood home and made a shocking discovery.

Anyway. He’s been there a couple of weeks. My sister has gone home to our childhood home@for Christmas. And she’s just sent me this. pic.twitter.com/Yzp5BvHDg9

Poor, urine-soaked Crackers wasn’t Crackers at all. It was just some abandoned stuffed animal. The real Crackers had been sitting all warm and fluffy in Gallagher’s bedroom the whole time.

So Crackers wasn’t lost in a move?

Who does Not Crackers belong to? 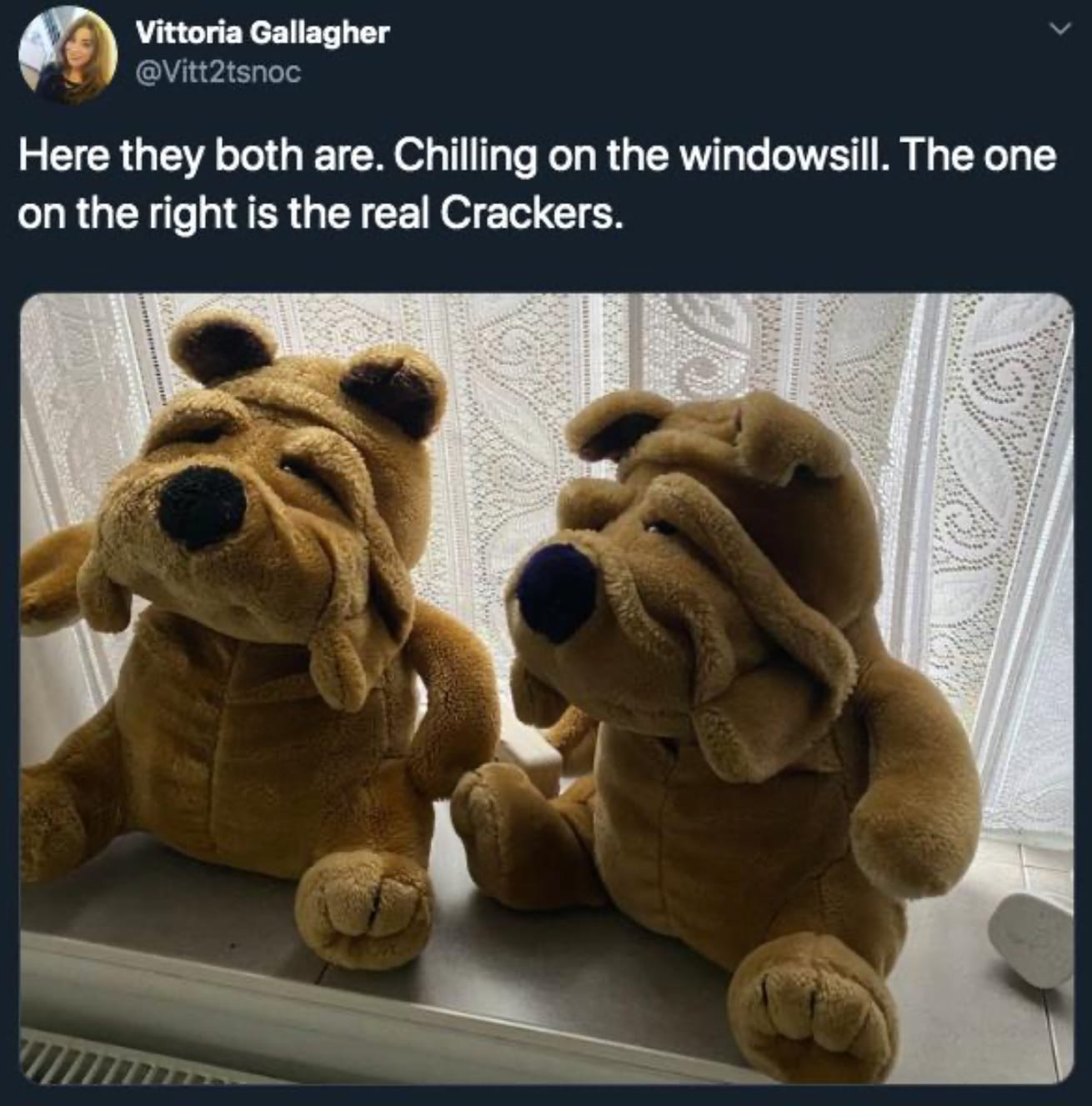 What’s so weird is Gallagher’s coincidental find of the imposter as she was walking past the spot she thought she saw him last. It seemed kismet.

The two Crackers are buds now sitting in Gallagher’s kitchen probably switching places when she’s not looking and laughing behind her back.

What hi-jinks will they think of together?