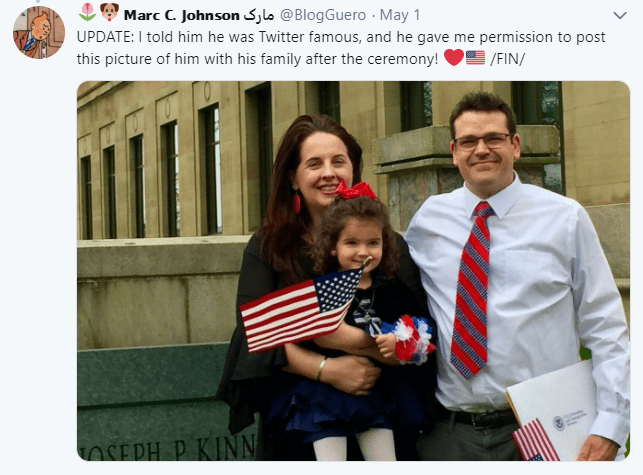 It’s a typical situation. Your closet is getting a little cluttered, so you clean it out. Some things you donate, while others you may decide to sell online.

Marc Johnson was doing exactly that. He wanted to get rid of a few neckties, so he put them on eBay. One of them was this tie:

I'd like to tell a short story about America. It begins with me listing a necktie on Ebay. It was this tie. I used to wear it on the 4th of July, but I've been downsizing so I decided to sell it. pic.twitter.com/uvoWHAbmJE

There was only one bidder on the tie: Jaques Campher, who lives in Ohio, according to The Washington Post. Johnson discovered that there was a stain on the tie, though, and decided to disclose that to Campher.

He comes right back and asks if I think it will come out if he takes it to the dry cleaners. He said he really wanted it because he wanted to wear it TO HIS SWEARING IN CEREMONY TO BECOME AN AMERICAN CITIZEN.

Johnson, a consultant and former CIA officer, was moved.

I thought about it for a second and just decided to send him the tie gratis and cancel the auction. I sent him a note telling him not to be alarmed that I canceled the auction; I wanted him to have the tie with my congratulations on becoming a citizen.

Campher explained that he was raised by his grandparents in South Africa and was taught to be frugal. Campher told Johnson that he would treasure the tie. Johnson sent the tie and that was that.

Until he received this photo of Campher at his swearing-in ceremony:

He sent me a picture of him at the swearing in, wearing the tie! (i've covered his face for privacy reasons) pic.twitter.com/v67imEtud3

A small act of kindness brought these two together. Campher later permitted Johnson to share a photo taken after his ceremony:

UPDATE: I told him he was Twitter famous, and he gave me permission to post this picture of him with his family after the ceremony! ❤️?? /FIN/ pic.twitter.com/xY6oMj7Sss

Maybe we could all take a moment to remember that we have more in common than we sometimes realize, and there are small kindnesses all around us.