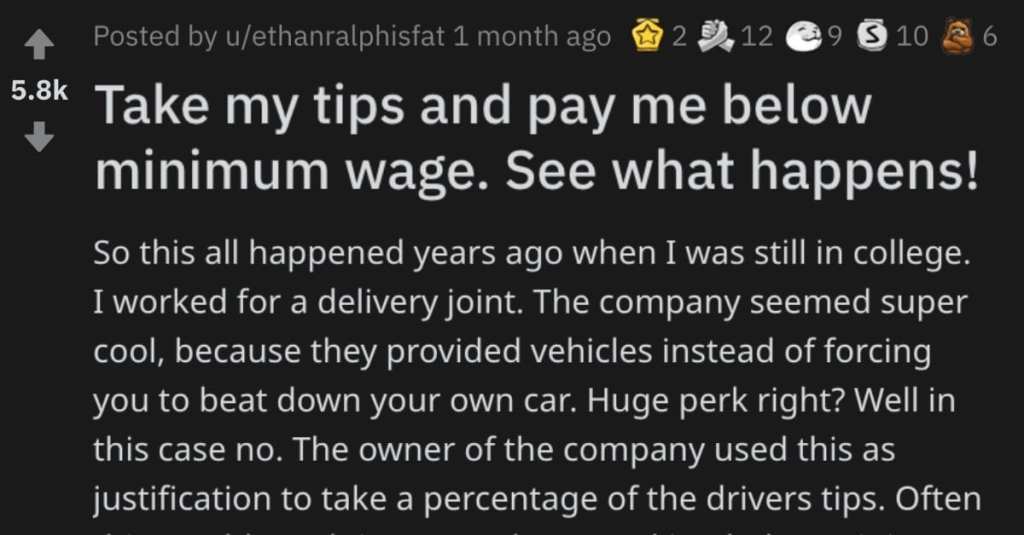 But sometimes beggars can’t be choosers and you have to take what you can get to pay the bills.

But it sure is satisfying to see people get revenge for being jerked around at work and this story made my heart swell!

Take my tips and pay me below minimum wage. See what happens!

“So this all happened years ago when I was still in college. I worked for a delivery joint.

The company seemed super cool, because they provided vehicles instead of forcing you to beat down your own car. Huge perk right? Well in this case no. The owner of the company used this as justification to take a percentage of the drivers tips.

Now this was a problem for two reasons. Number one, in the state I was in, employee tips belonged to the employee unless part of an employee tip pooling agreement.

This was plain as day on the Department of labor website. So that 20% gouge was already crossing a line. Number two, you cannot just hand wave and or force employees to say they made above minimum wage. So pretty shady s**t right?

Now most people would see this situation and run for the hills (which probably explained the delivery driver turnover being so high). I on the other hand saw the potential. See I am pretty well versed in labor law, and decided that I was gonna ride it out. I wanted to see how long they would keep this s**t up.

Here and there I would make comments to the managers about the legality of their practices, and was often told “Our lawyers said it’s ok, so it’s ok” (would love to meet these lawyers one day). So I patiently waited for a year, documenting every red cent they took from me and encouraging the other drivers to do so.

Every new driver that came through that door got a little pow wow with me, and I would give them the skinny. Unfortunately my plan must have leaked because sooner than later the joint decided to fire me after making up three bogus infractions. If you’re interested in those ask and ill explain in an edit.

This wasn’t a problem though, as my plan was already in action. See in this state, unpaid wages collect interest. So What was 20-40 dollars a night, 5 nights a week, over one year; quickly became a decent sum.

So I began collecting the names of current and previous employees whom had been screwed over by the company and collected their documented data then sent it off to the department of labor. At the end of the day it took a couple months, but the company was eventually required to pay a decent chunk of change to all parties and a pretty hefty fine on top.

Overall I believe it came out to a little under 100k. I wasn’t done though. See those shady little documents they had us sign claiming we made over minimum wage effected how the company was reporting it’s payroll tax.

The IRS eventually came in and hit them for a ton of back taxes, and I received a small portion of the settlement (the irs used to pay people who tipped them off, don’t know if they still do).

Finally, I was increasingly aware of the companies under the table agreement with their health inspector. Which I decided to go ahead and tip off to the health department. This resulted in even more fines and a temporary closure for the joint.

All together it ended up costing this dumb little delivery joint a ton of money just to stay open, all cause they wanted 20 percent of their drivers tips. The moral here is this.

Know your labor laws, it’s degenerates like these whom profit off the ignorance or fear of a work force. The more you know about your rights, the less idiots like these will be able to survive in the wild.

Thanks for coming to my Ted talk.”

And now let’s see how people reacted on Reddit.

This reader was impressed by the revenge doled out in this story and they were also amazed by the GREED. 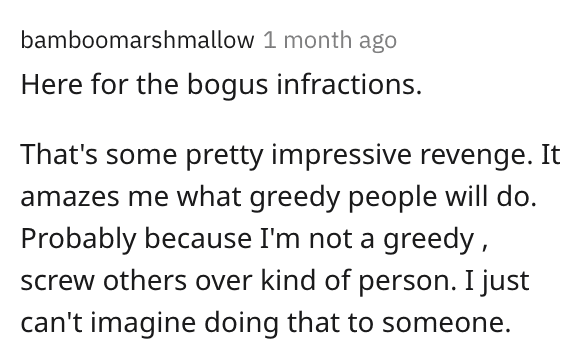 Another person offered up an alternative ending that also would have been satisfying. 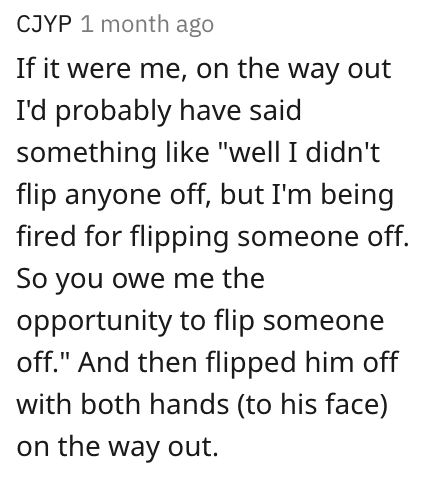 This individual said it amazes them what people think they can get away with. 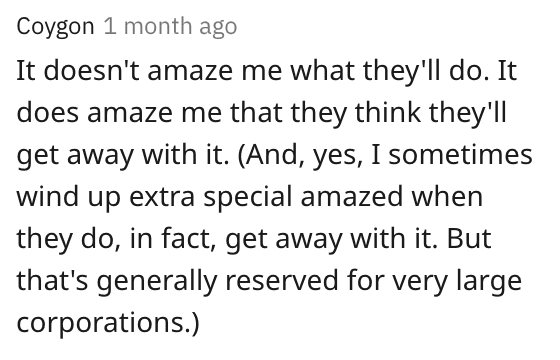 And lastly, this person made a great point: you probably shouldn’t treat employees badly who know all your dirty secrets. 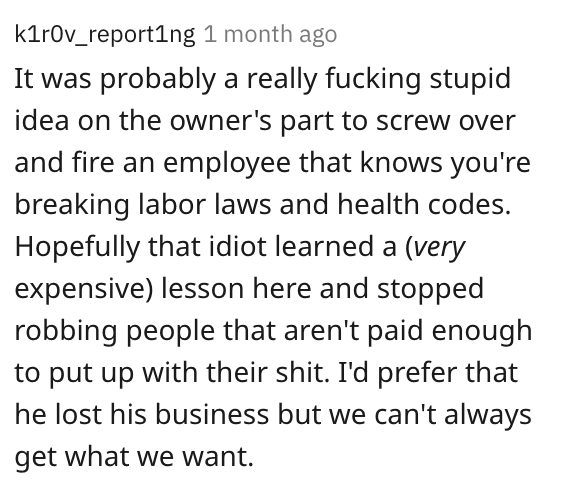 Have you ever had to deal with a bad work situation before?

If so, tell us your stories in the comments. Thanks a lot!