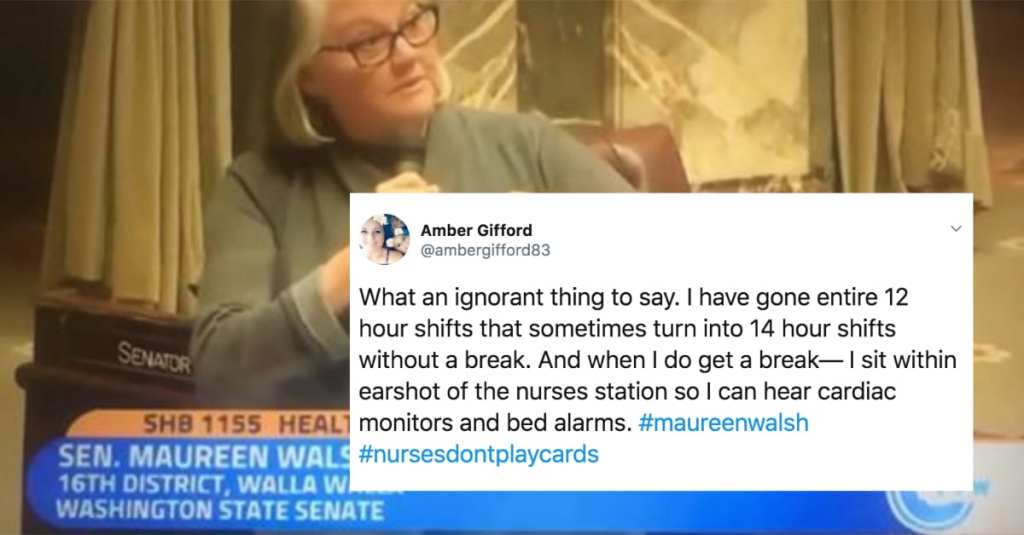 A Senator Said Nurses “Sit Around Playing Cards” Most of the Day. Nurses Had Something to Say About That.

A Republican state senator from Washington, Maureen Walsh, recently said something really dumb when debating a bill that would protect the state’s nurses from mandatory overtime, as well as making sure that they have uninterrupted breaks.

Yeah. Those comments not only pissed off nurses from Washington, but also a good chunk of the 3 million nurses in the United States.

Trust me, nurses haven’t earned the title “most trusted profession” for seventeen years running by “playing cards” on our shifts. WA Sen. Maureen Walsh should be ashamed to use #nurses to score cheap political points like this. #1U #nurseslife pic.twitter.com/ucm89ezpDj

1 years worth of flashcards in a nursing degree. Never had a single chance to even look at them at a clinical site. These are the cards it takes to simply learn enough base knowledge so we never play cards with someone’s life. #nursesdontplaycards pic.twitter.com/nQBZ4LXYdG

Or what the job really entails…

In any given week I:
-care for a person following a heart attack
-identify someone having an active stroke and take immediate action to save their life
-help a family grieve a loss
-hold the hand of a dying Veteran

And paramedics got in on the criticism…

I’m a paramedic and I’d like to know which hospital you go to Miss Walsh, because the ones I transport to, those nurses have been on their feet all day and are lucky to squeeze in a bathroom break. They deal with rude, intoxicated, violent, and sick people. #nursesdontplaycards

Senator Walsh… what were you thinking?!?