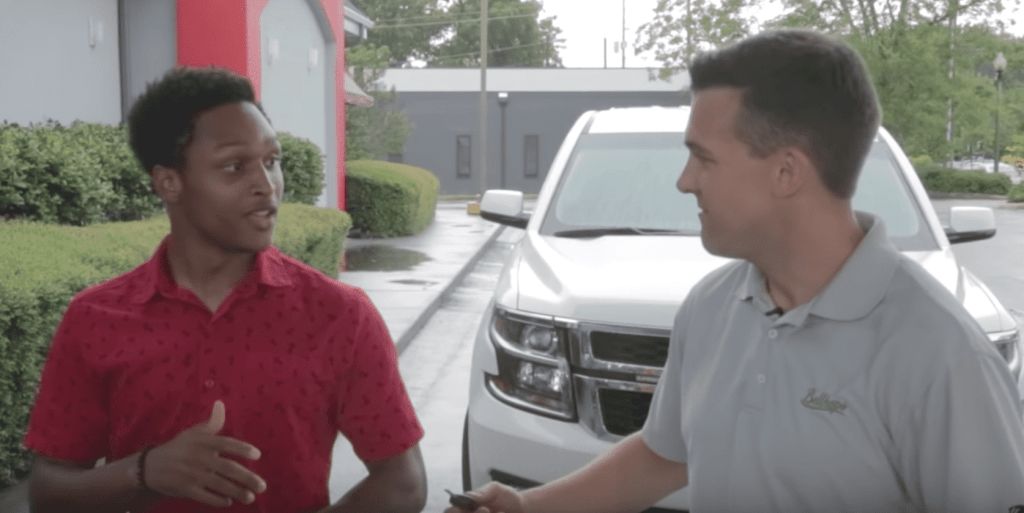 This is what leadership looks like and this is what kindness looks like. A hard-working young man in Alabama named Walter Carr walked 20 miles to work after his car broke down and he couldn’t find a ride. Carr is a college student and this was supposed to be his first day at his new job at Bellhops moving company.

Police picked up Carr as he was walking in the middle of the night, took him to breakfast, and dropped him off at the home of the customer he was supposed to help move that morning.

When Walter Carr's vehicle broke down before his first day on the job, he could have called out. Instead, he chose to walk over a dozen miles to get there on time and gained the attention of his company's CEO, who made sure he would always have a ride: https://t.co/Rw3DAyjNFs pic.twitter.com/nFQwdLy8dF

The customer, Jenny Lamey, was so moved by the experience she shared Carr’s story on Facebook and it went viral.

“Yesterday was a long day. But a good day. Chris and I woke up around 5:45am to get everything staged and ready for the movers. Around 6:30am the doorbell rang. It was a police officer. He proceeded to tell us that he had picked up “this nice kid” in Pelham early this morning. “The nice kid”, Walter, said that he was supposed to help us with our move today. It was his first day on the job with this moving company (Bellhops) and he was “training” today. The officer proceeded to tell us that the previous evening Walter’s car broke down and he didn’t know how he was going to get to work. So he left Homewood at MIDNIGHT and started WALKING to Pelham on 280.

He WALKED ALL NIGHT to get from Homewood to Pelham. Because he needed to get to work. For those reading this that are not local, that’s over 20 Miles. You could tell how the officer told us this story that he had complete admiration for Walter and by my reaction he could tell I did too. The police officer said they picked him up earlier that morning, took him to get some breakfast and once they checked his story out, brought Walter to our house. We introduced ourselves to Walter and told the officer he was just fine to stay here with us until the rest of the crew arrived. I asked Walter if he wanted to go upstairs and rest until everyone else arrived. He declined and said he could go ahead and get started. So he began working alongside Chris and I before the rest of the crew arrived.

We chatted while we were working together early yesterday morning. He loved my kitchen and said that it was exactly the kind of kitchen he would want. He was from New Orleans. He and his mother lost their home in Hurricane Katrina and they came and made their home in Birmingham. I asked him if he was tired from all that walking and he said replied that he wasn’t and that he had a 4 hour nap before he left at midnight. He said he made it Hoover around 2am and then to Pelham around 4am, that’s about when the officer picked him up and took him to get breakfast.

He wore black Nike joggers which he commented that he intentionally wore because he knew he had to walk thru some pretty high grass on his middle-of-the-night trek. He looked at me in the eye and smiled and I felt like I had known him much longer. He was a Marine. I didn’t get anymore of the story. The rest of the crew arrived and then the craziness started. All of the young men that came to move us yesterday (9 in total) were some of the best young men I have met. Several of them were in college, engineering majors (you should have seen them putting together our beds!!), one of them starts PA school in the fall, some just working hard since high school, some of them had been with Bellhops a while and others had just started!

With the way they worked together as a team, you would have thought they had worked together for years. They remembered all of our names and Zach and Chase just had the best time cutting up with them and shooting hoops when the day was done.

I just can’t tell you how touched I was by Walter and his journey. He is humble and kind and cheerful and he had big dreams! He is hardworking and tough. I can’t imagine how many times on that lonely walk down 280 in the middle of the night did he want to turn back. How many times did he wonder if this was the best idea. How many times did he want to find a place to sit or lie down and wait til morning when he could maybe get someone to come pick him up and bring him back home. But he walked until he got here! I am in total awe of this young man!

As the crew arrived one by one I saw them interacting in the street outside our house. Shaking each other’s hands and all of them just as cheerful and ready for the day as Walter was. Walter and I emerged from the house and one of the crew, Shawn, saw us and said to Walter “You must be one of the recruits…let me shake your hand. Thanks for showing up!” He extended his hand to shake Walter’s. He was in total appreciation to him for being there. I guess it may be common for a “recruit” as he referred to him as, to not show up leaving the rest of the crew without the extra man they were counting on. I just looked at Shawn and said, “you wouldn’t believe what he did to get here. Tell him Walter”. Walter said “I walked”. That was it. Humble. I asked him to share a little more and when he did, the crew was in awe of him too! I don’t know that Walter would have shared if I hadn’t asked him to.

When Walter Carr's car broke down, he walked all night for a 20-mile trip so he could be on time for his first day of work at a moving company.

The CEO was so impressed that he gave the Alabama college student his own 2014 Ford Escape. https://t.co/mCJfmDT6bz pic.twitter.com/dqMdDUeHxe

The CEO of Bellhops, Luke Marklin, was so moved by the story that he drove from Tennessee to Alabama to give Walter Carr his family’s vehicle as a gift.

Here’s a video of the heartwarming exchange.

A great story and Walter Carr and Luke Marklin are obviously both stand-up individuals. It’s always refreshing to see great, heartwarming stories like this one.

Bravo to both men!