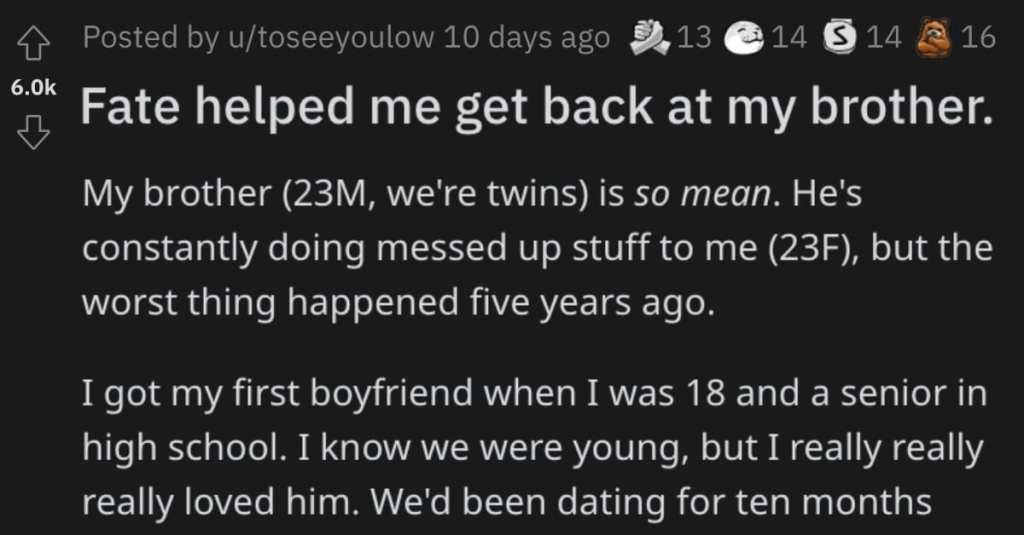 If you love a good revenge story, hang on tight, amigos!

Because a young woman who has a strained relationship with her twin brother finally got some serious revenge on him and she shared her story on Reddit.

Let’s check it out!

Fate helped me get back at my brother.

“I originally posted this in two parts as it was unfolding on r/relationship_advice, and a couple people told me to post it here. I didn’t know this sub existed but I’m happy it does. So…

My brother (23M, we’re twins) is so mean. He’s constantly doing messed up stuff to me (23F), but the worst thing happened five years ago.

I got my first boyfriend when I was 18 and a senior in high school. I know we were young, but I really really really loved him. We’d been dating for ten months when my brother randomly decided – for literally no reason at all – to make up a story about how he “caught me cheating” and tell it to my boyfriend.

He planned it all out, he came up with details – he made it sound real. And because he’s such a scarily good liar and a master manipulator, my boyfriend believed him. No matter what I said or did to prove it wasn’t true, he believed my brother over me. My brother kept up with his act the entire time and refused to admit he was lying.

At one point I thought I’d finally gotten my boyfriend to believe me, but then he broke up with me a few months later and confessed it was because he was still convinced I’d cheated on him and he couldn’t move past it. He said, “the worst part is that you won’t just tell me the truth” and not to sound dramatic but that still haunts me; I want to cry every time I think about it.

And I still miss him to this day. (Also, I think it’s important to note that my brother has never once apologized ! He’s so insanely mean that he just thinks it’s funny. I even asked him once if he’d consider hitting my ex up and telling him the truth for my peace of mind and he just laughed at me.)

I never got over what my brother did, and I always told myself I was gonna do the exact same thing to him one day. He’s dated several girls since high school, but he’d never been serious enough about any of them for me to consider tricking them.

I knew it wouldn’t hurt him like he hurt me if I just tricked one of his flings or something. But he finally got his first serious girlfriend last year, and after thinking about it for a looong time I decided I was gonna do it.

We live in different places now so I had to do it all online. I used a different method than he did; I contacted his girlfriend pretending to be “the girl he’d been cheating with”. I made up an elaborate detailed story like he did to me and even photoshopped “proof” and stuff.

I made my story even more believable than he made his. And exactly like he did to me, I went as far as denying it even to him because I knew he might use my texts/calls to prove to his girlfriend that it isn’t true. He knew I was behind it, though, solely because the girl I made up doesn’t exist and there’s no one else that would do this. But I kept denying it.

His girlfriend wholeheartedly believed me, and my brother kept calling and texting me and begging me to “give it up” (even though I still wouldn’t admit it was me). He was manipulating me and arguing that it’s “different” because I was younger when he did it to me and my relationship “wasn’t serious”.

But my relationship was serious, and like I said, I still miss my ex. My brother really, really messed me up. I have empathy though (he doesn’t) and I was starting to feel bad for his girlfriend because she’s innocent. I was kind of regretting everything and thinking that maybe I should tell his girlfriend the truth (for her sake, not his).

His girlfriend asked me a question which led to her admitting that she’s “been suspicious of him for a long time”, so I pried a little bit and encouraged her to look through his phone. She told me she couldn’t because she didn’t know the passcode and he wouldn’t give her access to it.

I guessed a few passcodes I thought it could be and gave them to her under the guise of “seeing it once but not being sure which one I’d seen” (that was kind of dumb but I couldn’t think of anything else to say and she didn’t question it). She got in because it ended up being the same one he’s had since 2012 when our dad got us iPhones and made us use the same passcode. Idiot.

Anyway, low and behold….it turns out my brother actually cheated on her and my set up was the reason she found out. He’s been talking to and hooking up with multiple girls for pretty much the entirety of their relationship.

I’m not surprised, because he’s a terrible person and cheating seems right up his alley, but I’m shocked at the same time. I literally can’t believe things worked out this perfectly; it feels like a dream or something. The universe loves me.

I hate to revel in his girlfriend’s misery, but I was feeling guilty about her being collateral damage, so I feel like this is the best possible outcome. My lie ended up being the truth – well not exactly but you know what I mean – so I didn’t scar his gf or leave her with permanent damage for no reason.

All my interference did was speed up the process of the truth coming to light. In fact, my brother may have been able to hide his cheating forever if not for me. He probably would’ve just manipulated his gf and/or refused to give her phone access forever. She hasn’t broken up with him and I’m honestly not sure if she will.

Idk how relevant that is but it attests to how manipulative he is. He screws people over all the time but somehow always gets his way anyway. It’s honestly infuriating and scary.

Anyway, I’m still not going to admit to my brother that I’m behind it all, because there’s no point. That would just get me in deeper trouble. I got a comment on my original post that said “deny til you die baby”…and that’s exactly what I’m planning on doing lol.

Life sure is crazy…and here’s how folks responded on Reddit. And I think it’s pretty unanimous that her brother is a major creep.

This person said that she needs to go further to protect her privacy online. 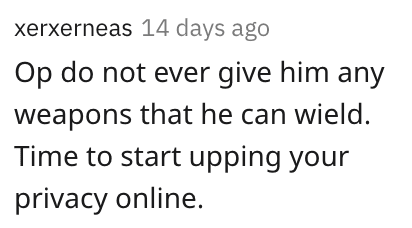 Another Reddit user said that she needs to tread very carefully because her brother might try to escalate this situation to an even higher level. 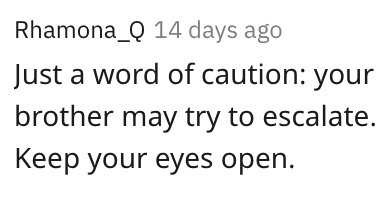 Another individual stated the obvious: her brother is a real piece of s**t. 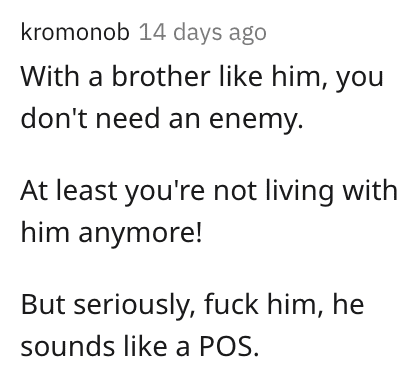 And finally, this person might have hit the nail on the head. 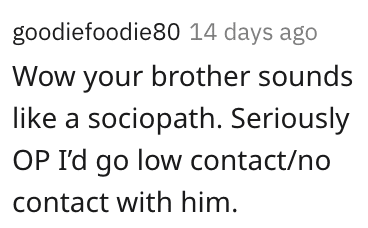 If so, please do it in the comments.

We can’t wait to hear them!