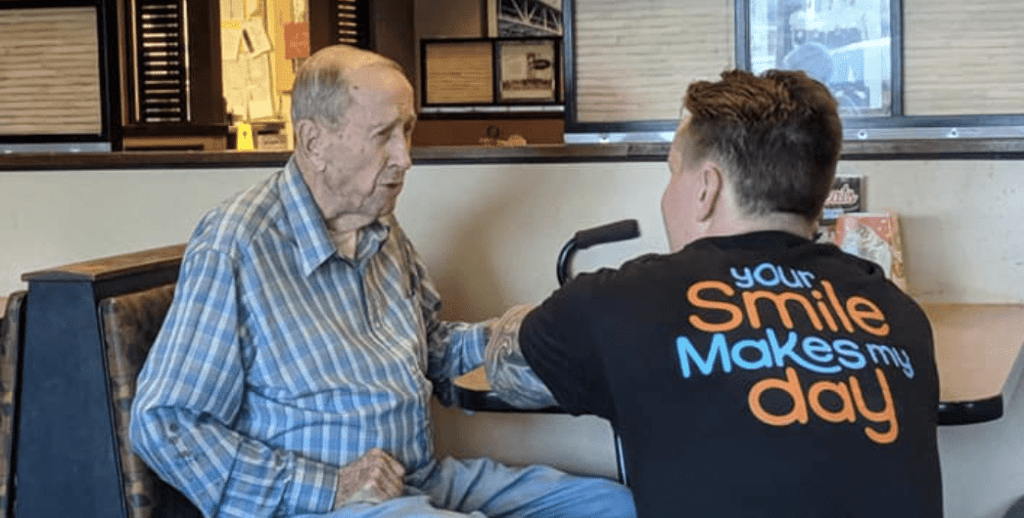 Lisa Meilanger, a resident of Belle Vernon, a region outside of Pittsburgh, captured an act of kindness while dining at Eat N Park.

It’s apropos that this picture was captured at this particular restaurant as their motto is “A Place For Smiles.”

And it has spread smiles all around.

Meilanger overheard Dylan, a young waiter talking to a 91-year-old patron of the restaurant. Meilanger recalled:

“The man apologized for not hearing too well. He had forgotten to put in his hearing aids. He talked about how he lost his hearing during his time in the war. He was 91 years old with many stories to tell. Dylan patiently listened giving him his full attention.”

The man later apologized for talking too much and said, “I’m alone now and I don’t often have someone to talk to.”

The two navigated the menu, decided on what the man wanted to eat and Dylan disappeared to place the order.

“It was a touching sight.”

But the kindness continues.

When the man’s food was delivered, Dylan sat next to his new friend when he was on his break. Normally, from my experience as a waitress, we’d go in the back, grab a bite or sit and talk to our co-workers. Dylan didn’t appear to have that in mind, only the thought that he’ll learn more about this man’s life.

“After the man received his food Dylan came back to say he was on a break.

He asked if he could sit with the gentleman as he ate. As we left the restaurant the two of them were conversing and many people seated nearby were smiling.”

Meilanger wanted to pay for the man’s meal, and apparently so did other restaurant diners.

“A man seated at a nearby booth asked Dylan to bring him his check. “Someone’s already taken care of it,” Dylan smiled.

Kindness doesn’t need to be some grand gesture. It can be as simple as making someone’s day with a smile, a wave, or even a conversation.

“With all of the negative stories about our youth today this was a breath of fresh air. I wonder if I would have been as kind and attentive if I were the one working there. One thing’s for sure, if you are ever at Eat’n Park in Belle Vernon, ask for Dylan. If he’s your waiter you’re certain to get great service.”

What did Dylan have to say about all this? Good Morning America posted an interview with the young man and he is as humble as Eat N Parks’ homemade apple pie.

Take a lesson from Dylan’s book and find a moment to be kind and compassionate to the people around you.

It makes the world a better place.