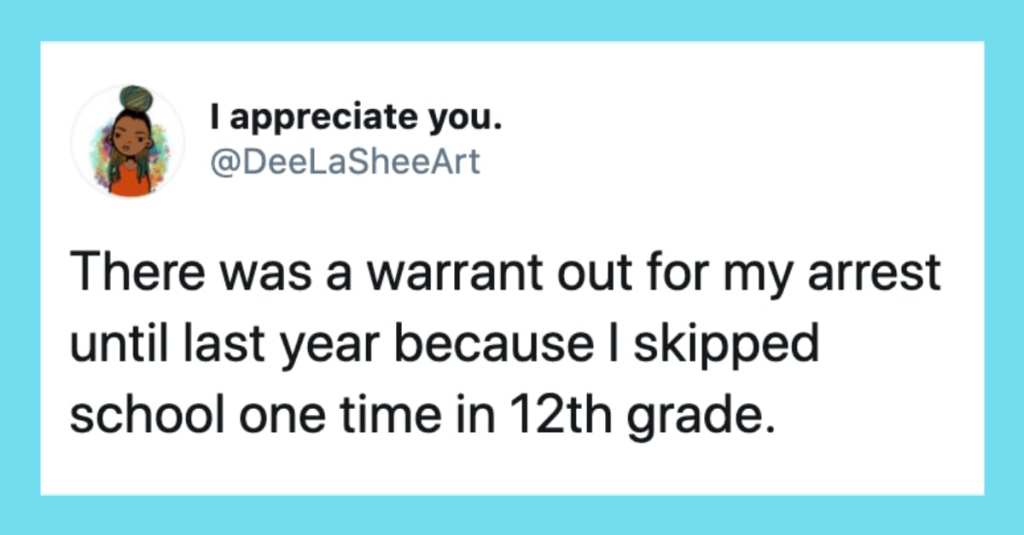 Sometimes, you read stories about the experiences of people and you just scratch your head because they seem so unbelievable. Or ridiculous.

And that’s definitely the case with a young woman named Dee who took to Twitter to share her own story. Dee’s story represents how the unfair justice system in America is tilted against poor people of color and how the “school to prison” pipeline is a very real thing in this country.

This is how Dee started her story.

There was a warrant out for my arrest until last year because I skipped school one time in 12th grade. For 6+ years they reassigned my “case” to several different judges. The school to prison pipeline is very real & DPS is a hub because of its high population of poor Black ppl

Dee’s story illustrates how very minor transgressions can follow black people even after they leave school.

I didn’t even know there was a warrant until I got hit by a car & the police I called to help me told me that I was lucky I was out of jurisdiction because he could’ve arrested me.

The story got even more ridiculous when Dee tried to clear up the whole truancy issue that was several years old by this point.

I called the court to see why I had a warrant for my arrest. By this pint I was in my 2nd year of grad school. They said it was from my truancy ticket in 2011. I said can I come in to fix it? The lady said if you come in you will be arrested.

Obviously, Grace did not go to the department to risk arrest. She later found out the charge was eventually closed. But she was also outraged by the stupidity of the whole process.

So I said fuck that & never went in. I was going to attempt to fix it again last year & idk why or how after 6+ years they decided to close it but it was gone. But the sheer ridiculousness of the entire thing is sumthin I think about all the time.

Finally, Dee commented about how her story is not unique among black people and she referenced the recent story of a teenager named Grace who was sent to juvenile hall for not doing her homework during the pandemic.

I would’ve had an arrest record for skipping school 1 time when I was 17. I’m not shocked by how they’re treating that young girl. I’m pissed off because they’re potentially ruining her life over nothing. The legal system was designed to keep you in it. She dnt deserve tht

Do you have any stories similar to Dee’s?