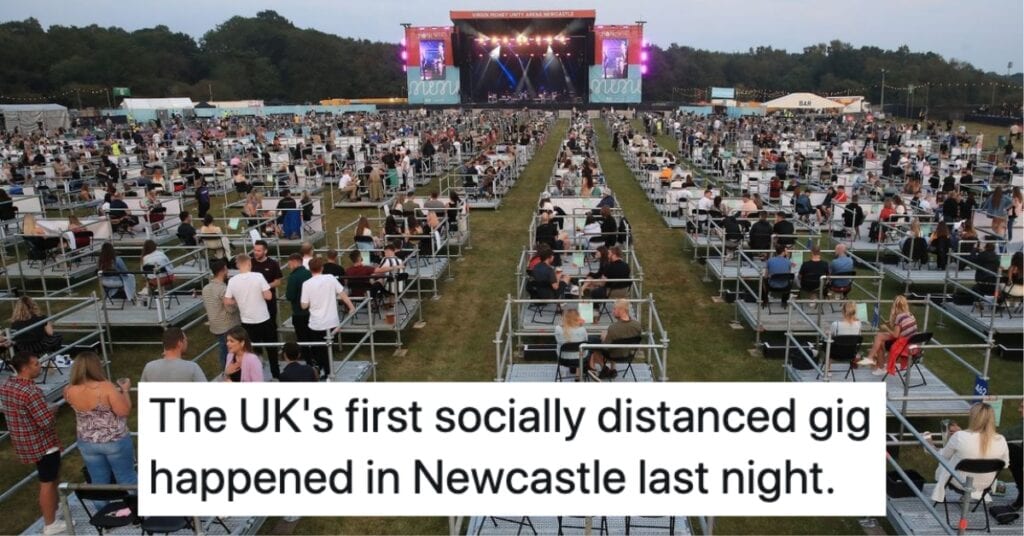 Wouldn’t be it nice to go see a live band right now? Heck, I’d settle for ANY kind of band at this point, it wouldn’t even have to be something that I enjoy all that much.

BUT, as you are aware, we’re still in the midst of a terrible worldwide pandemic that doesn’t seem to be subsiding much or at all.

So what to do?

Well, the first socially distanced concert took place in the United Kingdom recently and it looks like they did a pretty good job AND it actually looks like this would be a pretty decent alternative until we get back to normal somewhere down the road.

The concert took place in the British city of Newcastle and featured Sam Fender, who shared a video of the live show. The audience was divided into 500 groups of 5 people each at safe distances from each other.

Each group of 5 people had their own platform viewing area where they could watch the show from.

And, to make things pretty easy and safer, audience members were able to order food and drinks on an app and either pick them up at a kiosk or have them delivered to their platform. Pretty, cool, right?!?!

I hope we see more of these kinds of shows soon so musicians and folks who work in the live music industry can start getting back to work!

Let’s hope that we can all get back to seeing live music MUCH sooner than later.

When it’s safe to go to live shows again, who do you want to see play first?

Talk to us and the comments and share your thoughts with us. Thanks!