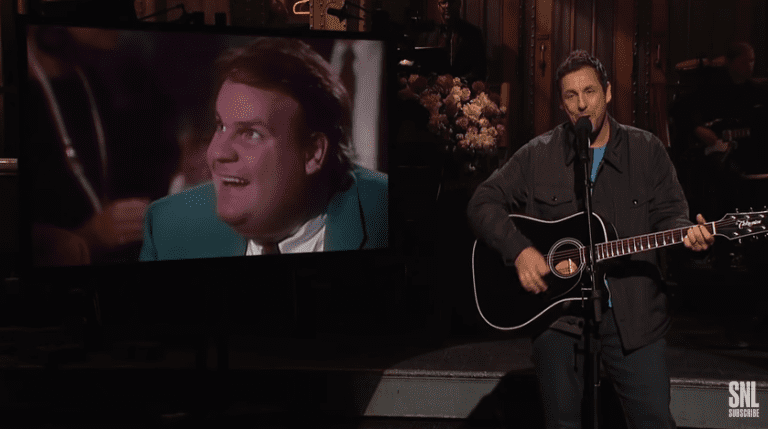 After a 24-year absence, Adam Sandler has returned to Saturday Night Live, this time as a host. The night was full of nostalgia, including a partly-sung monologue that had the chorus, “I was fired.” To be fair, he was, and he still doesn’t know why.

He also mentioned his movies went on the make $4 billion at the box office, so things turned out okay.

He reprised his role as Opera Man, and other cast members brought back several of his iconic characters. The most touching moment of the episode, though, was when Sandler sang a tribute to his former castmate, Chris Farley.

Farley died of a drug overdose in 1997 at the age of 33. He, Sandler, Chris Rock, and David Spade all shared an office when they worked on SNL in the early 1990s. Farley and Sandler were also fired around the same time.

Instead of a final comedy sketch, Sandler performed his tribute song to Farley, which he had first presented on his Netflix comedy special, 100% Fresh. The lyrics touch on their friendship, as well as Farley’s iconic SNL characters, his struggles with substance abuse, and his legacy.

Here are the lyrics:

The first time I saw him he was sweeter than honey
Plaid jacket and belt too tight
He wasn’t even being funny
Then he cartwheeled around the room
And slow danced with the cleaning lady
He was a one man party
You know I’m talking about
I’m talking about my friend Chris Farley
On a Saturday night my man would always deliver
Whether he was the bumblebee girl
Or living in a van down by the river
He loved the Bears and he could dance
That Chippendales with Swayze
When they replaced his coffee with Folgers
He went full on crazy
The sexiest gap girl
Without him there’d be no lunch lady
In lunch lady land
Oh, I’m thinking about
I’m thinking about my boy
Chris Farley
After a show he’d drink a quarter Jack Daniels
And stick the bottle up his ass
But, hangover as hell
That Catholic boy would still show up to morning mass
We tell him “Slow down, you’ll end up like Belushi and Candy”
He said ‘Those guys are my heroes, that’s all fine and dandy”
I ain’t making that stuff up
That’s the truth about my friend
Chris Farley
I saw him in the office crying with his headphones on
Listening to a KC And The Sunshine Band song
I said “Buddy, how the hell is that making you so sad”
Then he laughed and said “Just thinking about my dad”
The last big hang we had was at Timmy Meadows wedding party
We laughed all night long, all because of Farley
But a few months later the party came to an end
We flew out to Madison to bury our friend
Nothing was harder than saying goodbye
Except watching Chris’ father have his turn to cry
Hey buddy, life’s moved on but you still bring us so much joy
Make my kids laugh with your Youtube clips or “Tommy Boy”
And when they ask me who’s the funniest guy I ever knew
I tell hands down without a doubt it’s you
Yeah, I miss hanging out watching you trying to get laid
But most of all I miss watching you torture Spade
You ‘re a legend like you wanted
But I wish you were still here with me
And we would get on to shoot “Grown Ups 3”
Yeah, life ain’t the same without you boy
And that’s why I’m singing about
I’m singing about my boy Chris Farley
And if you make enough noise
Maybe he’ll hear us
Give it up for the great
Chris Farley

*sniff* He truly was one of the greats. Thanks for reminding us, Adam Sandler.