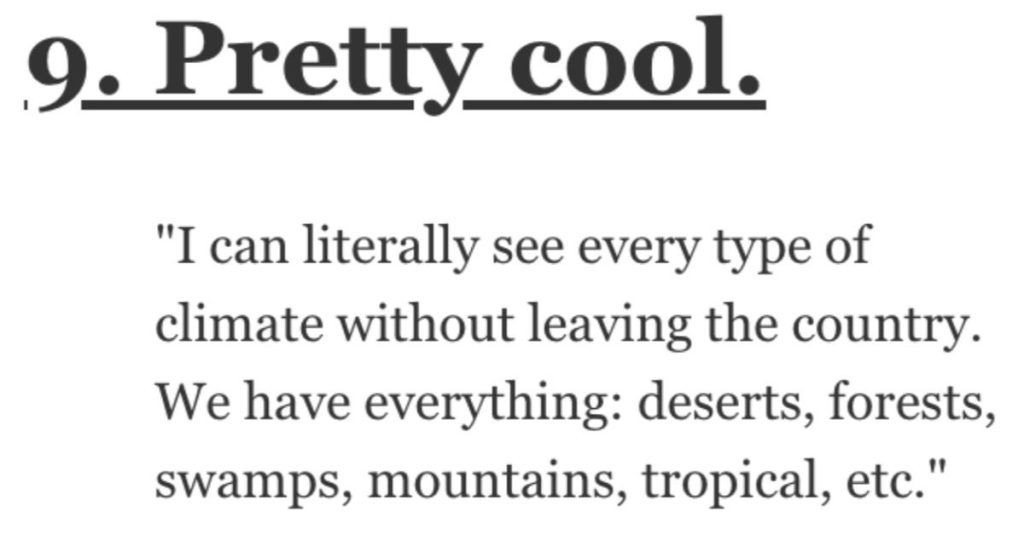 Americans, What’s Good About Your Country? Here’s How People Responded.

And yes, America’s government has done a lot of questionable things over the years…

But still, I think this country is a great place to live and that the good definitely outweighs the bad.

No doubt about it!

So, in the spirit of being patriotic, let’s hear from Americans about what they think is good about their homeland.

“Not just the big national parks, but the entire National Parks Service.

“I had a coworker who traveled with me to the Pacific North West from France and he was absolutely blown away by the beer culture there.

Budweiser and Coors are NOT all we have to offer. There are tens of thousands of microbrews and even in smaller towns you can often find a good taphouse to try the local stuff, often with 20 or more beers on tap.”

You can drive from Boston to Seattle on essentially one road (I-90).”

“There’s red tape & BS, but you still can work in any industry you want in the US.

You can also switch career paths and start over at any time.”

“The fact that I can piss and moan about and criticize the government and/or president and not fear (official) retribution.”

“While this may not apply to any given American person or town, our culture is not rigid or uptight at all.

There’s very little consequence in doing things drastically different from your neighbors, and there’s not much broad expectation to conform to “how things are done.”

Someone might judge you but that’s just, like, their opinion, man. While I don’t think this is necessarily uniquely American, it’s definitely not universal.”

“The Smithsonian Institution. It’s 20+ museums (and a zoo), all for free, in Washington DC/NYC/VA, run by the government.”

“I’m so thankful for libraries and librarians. I did do a lot of reading as a kid, but I stayed at the library from open to close, except for meals, a lot of days just to have a quiet place. Librarians would let me sleep and wouldn’t ever wake me until they had to at closing if I slept that long. I think a lot that libraries are one thing I’d invest a ton in if I won the lottery.”

“I can literally see every type of climate without leaving the country.

We have everything: deserts, forests, swamps, mountains, tropical, etc.”

“Culture is our biggest export.

Music, entertainment, and other forms of American art are the most popular in the entire world.”

I think about this often. I’m a Texan, and just today there was a man and his wife set up outside the grocery store selling barbecue.

“Canadian here, I love the US, and the chief reason is sport. Baseball is amazing!

Americans are friendly and loud and fun and I enjoy them.”