An Entitled Woman Steals Her Co-Worker’s Snacks, and Then Came the Revenge Note

A word to the wise: if you work in an office, DO NOT mess with other people’s food. If you do, you’ll eventually be found out, humiliated, and then put on blast. Just like this person did.

You’d think people might know better, but I guess not…

There are just certain things you don’t do in an office, and stealing from others is definitely at the top of that list.

Let’s take a look at this story of loss and revenge from Reddit.

“A woman at work was stealing from my snack drawer.

I knew exactly who it was, she was the only one who had seen where I put them. This woman was a pain: opinionated, gossipy, lazy, and just all around drama (I’ll call her Karen). I knew if I approached her, she’d deny it, get all butt hurt and make a scene. So I let it go.

One morning I took a personal call and was away from my desk for about 30 minutes. When I returned a new package of cookies I had brought that morning had been opened and was 4 light. 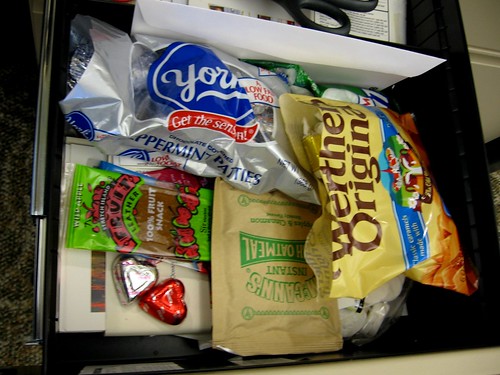 She must have watched me leave and came by while I was outside. Until now she’d just taken a few out of what was already open but she’d graduated to opening boxes.

I took a sheet of white paper and wrote in big black sharpie letters:

Here’s the rest of the story…

A woman at work was stealing from my snack drawer. from pettyrevenge

You should’ve stayed out of that snack drawer, KAREN!

Maybe that note was a little harsh, but to each their own, I guess…

Has this ever happened to you at work? It’s infuriating, isn’t it?!?! Share your tales from the workplace in the comments.

Let’s see who has the worst one!