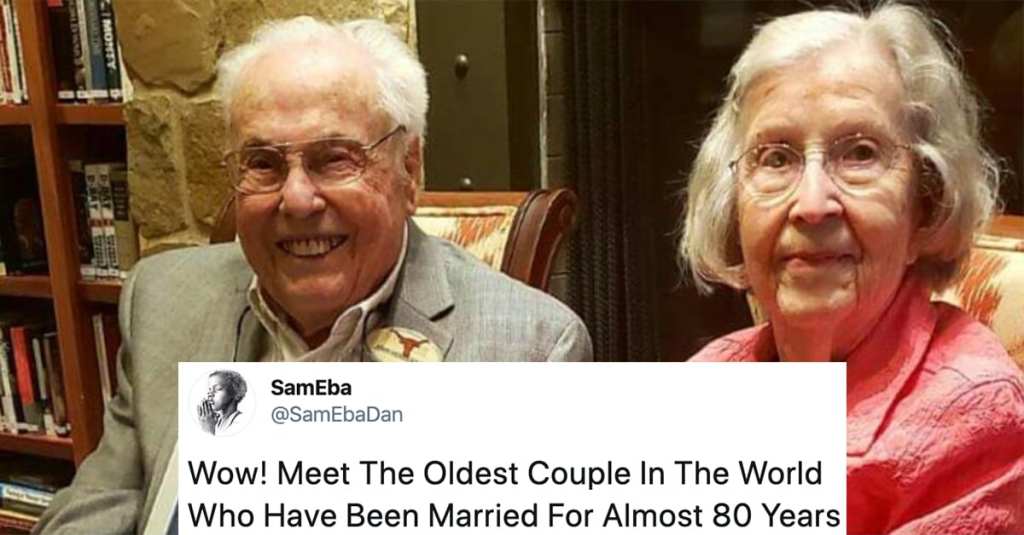 At a Combined Age of 211 Years, Texas Husband and Wife Named Oldest Living Couple in the World

If you ever want to see a portrait of what true love looks like, look no further than John and Charlotte Henderson. The Texas couple has been married for almost 80 years and they were recently named the oldest living couple in the world by the Guinness Book of World Records. Together, they’re combined age is 211-years-old.

The Hendersons got married in 1939 and they live in an assisted living facility in Austin, Texas. John Henderson is 106-years-old (he turns 107 in December) and Charlotte is 105-years-old. December 15, 2019 marks their 80th wedding anniversary.

Wow! Meet The Oldest Couple In The World Who Have Been Married For Almost 80 Years pic.twitter.com/xidgXoWZyU

The couple met in 1934 at the University of Texas. John played football at the school and Charlotte was studying to be a teacher. John has been the oldest living former University of Texas football player since 2010 and he still attends one game each season.

John recalled when he first saw his future wife,

“Charlotte looked over her shoulder and smiled and I knew I wanted to take her on a date. She was anxious for me to ask her!”

The Hendersons have no children and they spend their time relaxing and watching sports.

One of their nephews said about their relationship,

They are still making plans for their future together.”

John’s advice for a long life and a happy marriage:

“Live life in moderation and be cordial to your spouse.”

Now that’s some solid advice. And what a great love story! Makes our hearts soar!