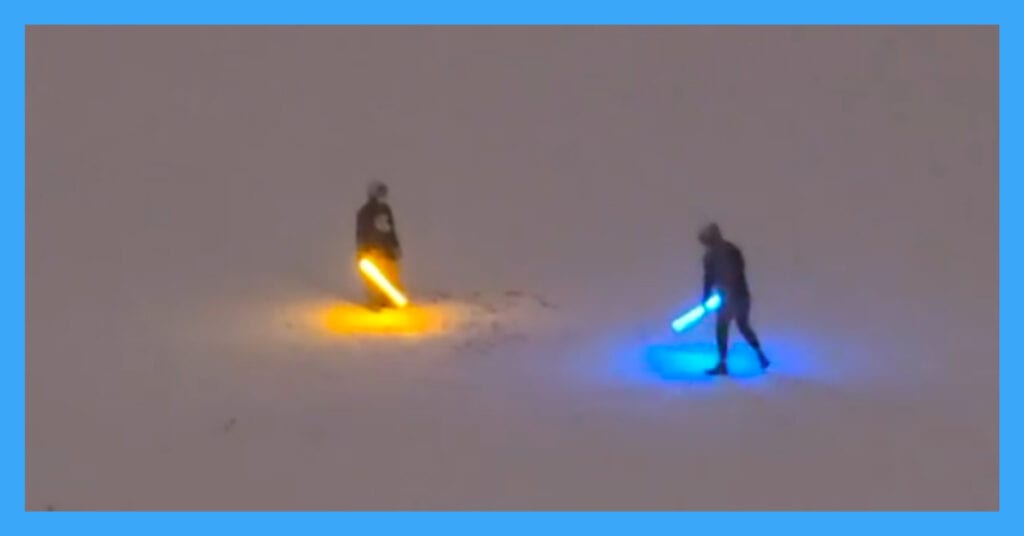 Playing in the snow is hard to resist. Sure it eventually turns to gray muck, and sometimes it needs to be shoveled.

But not being from an area that gets much snow, for me, it’s a little bit magical.

My husband’s favorite childhood memories are of playing football in the snow, and the last time we had a real one, I took the opportunity to build a snow man!

So it’s no wonder that some people in Colorado, who are used to getting plenty of snow, made a little magic of their own last February by engaging in a lightsaber duel.

Apparently, this is not the first time Coloradans have engaged in public Star Wars role play.

Yes there is a lightsaber battle occurring on the campus of Colorado state pic.twitter.com/bxOSxy6y

It’s not even the second time:

There are two dudes outside having a full-on, sith vs. jedi lightsaber battle, complete with robes. At 10PM. On a Monday…. May the Fourth be with you, friends!#MayTheFourthBeWithYou #StarWarsDay #thisisquarantine#Colorado

But one particular Friday evening, a young woman named Anghelie Elizabeth posted a video to her Facebook page of two people dressed in black, their swords clacking loudly together as they dueled in the snow.

Sadly, they do not make the electronic sounds you hear in the movies, but it’s still a blast to watch.

You can hear Elizabeth laughing in the background as she zooms in on the dueling duo.

One fighter has a blue saber like Anakin, Luke, and Rey. The other holds an orange lightsaber, which according to May4BeWithYou.com:

In the Star Wars Legends, the only known characters who have used Orange Lightsabers are Master Yaddle and Plo Koon. Both are Jedi but only the former used an Orange saber typically.

The snow definitely makes it epic, but I feel like we need a bombastic soundtrack. Think John Williams is available?

At just 30 seconds long, it’s not clear who won the battle, but it sure looks like everyone had a lot of fun. Take a look for yourself, and let us know what you think in the comments!