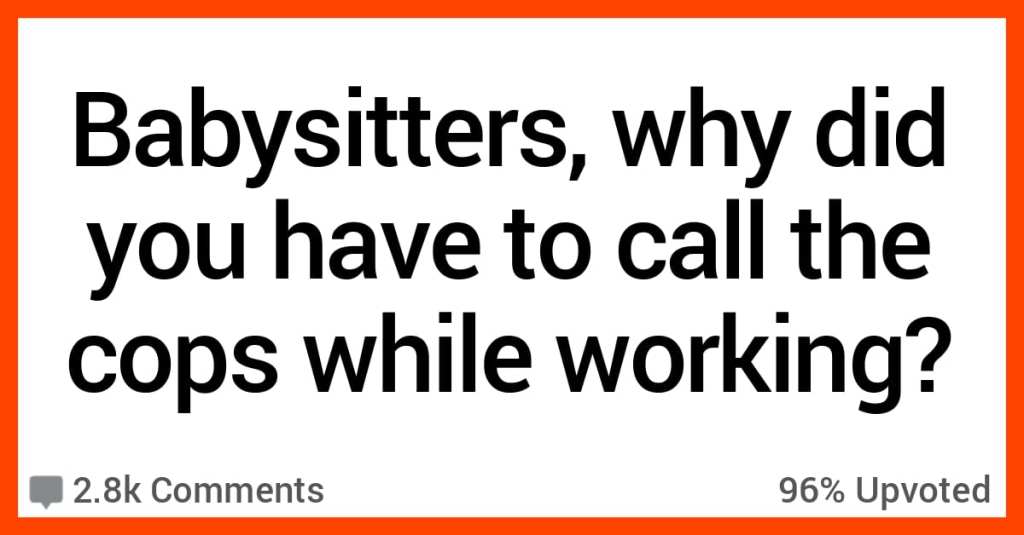 Babysitting is pretty weird: you have your young kids being watched (a lot of time) by other kids who are also pretty young.

What could possibly go wrong?!?!

And sometimes, things go sideways and babysitters have to call the cops for one reason or another.

Have you ever had to call the police while babysitting?

I exclaimed, “What the hell are you doing?!”

And she said she didn’t want her to grow up fat.”

“I called CPS on the parent of a kid I babysit regularly.

The kid is older and a bit of a mental health disaster. She’s got attachment issues and some other weird habits. I’ve written about her before. Anyway, the kid lives in my neighborhood and is at the age where she can go outside and be relatively unsupervised. She runs to my house when she’s fighting with her parents or her parents are fighting.

One afternoon, she runs to my house and gives me the run down on the blow out with her mom. “She pinned me down and was threatening to punch me in the face.” Then her mom texts me asking if I have seen her and mom is really concerned that the kid is trying to get her arrested.

Since I know the kid has an interesting relationship with the truth, I am not sure who to believe. I have a heart to heart with the kid and tell her to please do what her mother asks and not start telling back. If she has to run somewhere, I’m always home.

My husband and I talk about it and we decide to make the call. Before we could make the call, she was at our house three more times for these crazy blow out fights. We relay all of this to the intake person on the phone and then didn’t ever hear anything back about it.

The kid’s mom and I are pretty good friends and she’s been giving me the run down of this free family therapy program they have been doing and I finally put the pieces together that the family therapy is actually mandated and CPS is involved.”

“I am a babysitter and used to work at a daycare. The assistant director and I had to call the police once because a child was left behind over an hour after closing time.

We were afraid her mom had been in an accident or something. Turns out there was a miscommunication between mom and dad regarding pickup.

I really just think the dad forgot about her, as the mom was always the one picking up. It makes me sad to think that her dad forgot her.”

Dad started beating the sh*t out of mom over $20. She yelled from the back bedroom to call the police so I did. She came out asking me if I really called the cops….yeah I did! I was like 13 at the time.

Scared me so bad I couldn’t look at the dad the same ever again, even though they were back together not long after.”

I once babysat a 9 year old child and his 7 year old little sister. When I came one day to babysit them, the 7 year old had bruises and scars all over her face.

When I asked the children what happened, the 9 year old boy said that she hadn’t finished all her homework and had been beat by her parents, beating children is illegal in my country (New Zealand).”

“I was a daycare provider.

Once there was a new kid whose mom needed care while doing a job search. On the second day she never showed up and an hour after closing I called the police because mom was not answering at any of her contact numbers and I didn’t know what to do.

Mom had found a job and gone out drinking to celebrate. When they called me to update me mom had also stolen a vehicle and was being charged. Child protective services came to pick up the boy a couple hours after my call to police.

Another time I was called after hours by the police asking if I could care for one of the daycare kids because his single mother was very drunk at home and unable to take care of him. Neighbors had called the police.

The boy stayed the night with me and police arranged for his estranged father to come from out of town to pick him up at my place the next day. I am pretty sure mom lost custody completely.”

“The very first family I ever worked for got weirder and weirder as months passed working for them.

When I started with them they both left the house to work their full-time jobs. As months passed the mom began staying home because she was “sick”. Unfortunately, it became exceedingly clear that she was extremely depressed. The mom was so kind, if not a little odd, but I felt so bad for her because her husband was literally the creepiest and most bizarre man I have ever met.

So the mom continues to stay home from work and eventually gets fired. The problem is, they lived in a tiny one bedroom apartment with 2 children. So mom stayed home to “job hunt” and I nannied for their daughters. Then the dad starts working from home, leaving me to sit inside with the two girls, their mom and their dad in the same damn room for 9 hours a day.

I eventually told them I wasn’t cool with them both working from home as they were extremely loud and the father’s home etiquette became creepier and creepier. He started having me wake him up the morning when I came in for the day. Always asleep shirtless.

Then he worked in the living room with only boxers and a robe on. He also used to insist on hugging and kissing his daughters while I was holding them. He also insisted on watching me bathe his youngest daughter. Lots of borderline harassment moments.

But what brought me to consider calling CPS on them was the way the dad would kiss his oldest daughter. He would kiss her arm slowing from her hand all the way up to her shoulder and it felt inappropriate for me as she was nearly 6.

I had an affectionate family but kissing up an arm felt extremely romantic not fatherly. He also out of nowhere would say things like “I don’t bathe with the girls anymore because it wouldn’t be appropriate.” Completely out of context.

I also learned that his last nanny came across a journal he had left open in the kitchen that comprised of notes he took in order to get over his p*rn addiction.”

“I had to call the police because the parents didn’t come back!!

My dad was a gas station manager, and one day while I was hanging out with him at work a regular customer asked if I ever did any babysitting. I looked at my dad and he nodded a bit so I said sure. He told me that guy had been coming to his gas station for years and he knew him and his wife decently well and he thought it should be fine.

Well the plan was they were going to pick me up from my dads gas station and bring me to their place, go out for a while, then when they got back they would bring me back to him at the gas station. So they come get me and everything seems ok. The kids are a little bratty, fighting in the backseat but no big deal. Their house turned out to be a run down trailer in a small trailer park in the boonies.

I grew up poor so it’s not anything I wasn’t used too, but it surprised me since their car was really nice. Turned out they didn’t have a phone either, and this was right before cell phones were a really thing. So the three hours I was supposed to be there goes by, then four then five then six. At this point it’s past 10 and I’m freaking out. I decided to leave the kids in a playpen and try and see if any neighbors will let me use their phone.

After several door knocks I finally find one and call my dad. I’m in tears at this point but I give him the address and he comes to sit with me at the trailer. Another hour goes by and we call the police. The parents still didn’t come back during the whole interview process, and the kids were taken by dcs.

My dad is thinking something terrible has happened to them, as surely they wouldn’t just abandon their kids with the 15 year old babysitter right? Well they finally came home the next day (over 30 hours after they had dropped me off at their house) and it turned out they had went and done a bunch of her*in and were to messed up to keep up with time.

Turns out my Dad didn’t know the guy that well after all.”

“I have a bit of a reverse one where the babysitter was taken away in handcuffs.

It was about 20 years ago now and my dad’s sister had 2 kids who were around 2 & 4, she hired a babysitter for the night so her and her partner could have a date night. Don’t know how they found her but she was not stable enough to handle kids as full on as they were, she ended up drugging them with her anti psychotics and ADHD meds.

The parents got home a few hours later and realized something was very wrong.. they called emergency services and the kids had to be taken away in an ambulance and the girl was arrested and charged.

It made the news and was crazy as hell but the kids were okay but I have no idea how it turned out for the babysitter.”

“I didn’t call anyone, but should have.

I was watching a kid who was around 9 who told me his dad let him smoke cigarettes. I thought he was just saying it so that I would let him (I didn’t) but when the parents came home the kid told the dad I hadn’t let him smoke and the dad scolded me and gave his child a menthol.

He smoked full flavors, I suspect he got menthols literally because his 9 year old liked them better.

The mom is in prison now for some kind of fraud and the kids live with their much much older brother. I don’t know where the dad is.”

“I had to call the fire department once.

I was babysitting my neighbors three kids which I did frequently. There was a lit candle in the fireplace mantle. The cat jumped on the mantle and over the candle catching its long, fluffy tail on fire. It it’s understandable panic it set a curtain on fire.

With three screaming kids and a flaming cat as well as burning window dressing all I could do was rush everybody outside and call 911. The cat returned about a week later filthy, half bald and with some infection.

A vet visit fixed it up and the damage to the house was relatively minor, thank God. I continued to sit for them for another 3 years”

Do you have any weird babysitting stories?

If so, spill your guts in the comments.